Al-Araibi, who had been playing in Australia after being granted asylum there, was arrested in Thailand when he arrived with his wife on honeymoon.

He is wanted in Bahrain, where he was sentenced in absentia to 10 years in jail for vandalising a police station.

The FFA wants Al-Araibi returned to Australia "as a matter of urgency".

Al-Araibi says he is innocent and that he was tortured in Bahrain for his political opposition.

On Monday, he urged a court in Bangkok not to extradite him to his home country.

The court extended his detention by 60 days, during which he can file an objection against the extradition request.

"After a thorough process, he was assessed by the Australian government to be a refugee. This is a fundamental human right that must be protected."

Al-Araibi fled to Australia in 2014, where he was granted political asylum in 2017, and plays for Pascoe Vale in Melbourne.

In 2014, he was sentenced in his absence in Bahrain to 10 years in prison for vandalising a police station. He denies the charges, with campaigners from the Bahrain Institute for Rights and Democracy (BIRD) saying he is at grave risk of torture if he is deported.

He was on honeymoon in Thailand when authorities detained him at a Bangkok airport on 27 November last year. 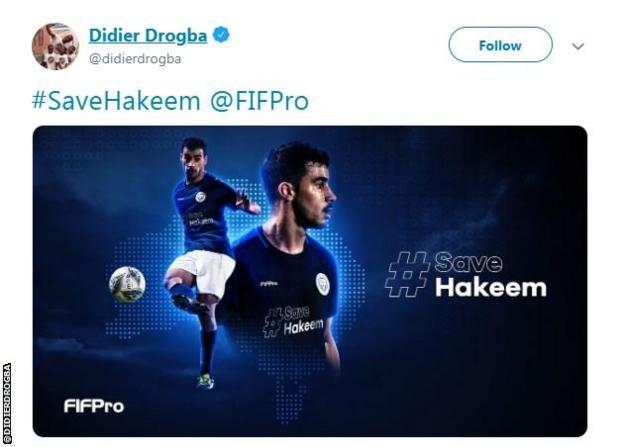 The Australian government, world football governing body Fifa and the international players' union FIFPro have all advocated the release of the player.

Teams from Australia's top-flight men's and women's leagues were pictured behind #SaveHakeem banners before their matches at the weekend.

After consultation with Professional Footballers Australia, the FFA pledged A$10,000 to kick-start the fundraising efforts of the 'Save Hakeem al-Araibi' campaign.

"The level of support for Hakeem went up another level over the weekend," added Gallop.

"More and more fans and players are actively calling for Hakeem to be released, both in Australia and around the world. I urge this vocal support to continue."