Just three days after he signed for Premier League club Cardiff City, Emiliano Sala was on a light aircraft that went missing over the English Channel on 21 January. Dorset Police on Thursday night confirmed the 28-year-old's body had been recovered from the wreckage, which was found on Sunday morning.

This is an updated version of a story first published on 22 January.

Emiliano Sala, whose death in a light aircraft crash at the age of 28 has been announced, was born in Santa Fe, Argentina - but it was in France that he forged his reputation.

Among the top five goalscorers in Ligue 1 this season, Sala netted 12 times at better than a goal every two games.

That prompted Cardiff to pay Nantes a club record £15m for a man who spent his entire professional career in the French leagues.

Sala was born on 31 October 1990 in the small rural community of Cululu in the Santa Fe province, about 340 miles north west of Buenos Aires.

After progressing through the youth set-up at Argentine side Club Proyecto Crecer, he moved to France to sign for Bordeaux.

But, after making his debut as a 21-year-old, he struggled for game time and a series of loan moves followed.

When he took that goalscoring form into a loan spell with Caen in 2015, Nantes had seen enough - and bought the 6ft 3in striker for a reported one million euros.

Three and a half years - and 42 goals later - came Premier League interest.

West Ham, Everton, Leicester, Crystal Palace, Fulham and Southampton were all linked with Sala, but it was Cardiff who got their man - eclipsing the £11m they paid for Gary Medel to sign him.

When his signing was announced, Sala said: "It gives me great pleasure and I can't wait to start training, meet my new team-mates and get down to work."

In a later tweet, he wrote: "I know the challenge is big, but together we will make it."

Two days later he posted a picture of him and his former Nantes team-mates. It was captioned "ciao". 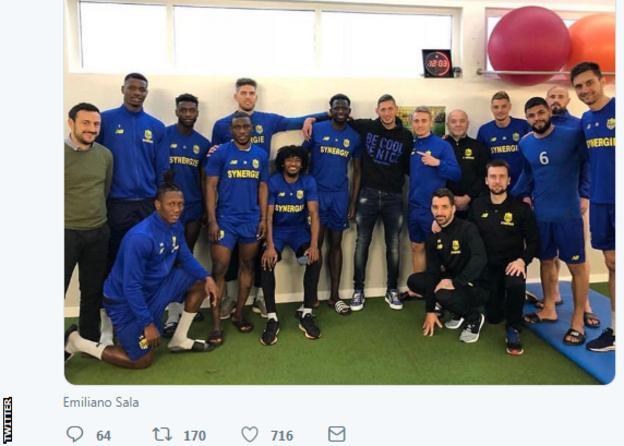