They have great players.

They have a wonderfully charismatic and entertaining manager.

But the thought of Liverpool winning the league for the first time since 1990 appears to have caused a significant divide - at least on social media and radio phone-ins.

One tweet, pictured above, urging every other Premier League team to join forces to stop Liverpool winning the title "for the sake of the whole of mankind" recently went viral.

How can this be? It is impossible to be scientific about this but let's take a look at what people have told us - and you can vote too.

First up, is this just about local rivalry?

So we did specifically ask for neutrals, but Everton and United fans couldn't help themselves...

Jack Buckley, Man Utd fan: I'd literally rather any club in the whole league win the title than Liverpool. Even City.

Joe Armitage, Everton fan: I'm a Toffee and 41 next month and for most of my childhood Liverpool were the bane of my life. I never wanted them to win a thing. This season they have been by far and away the best side (bar the result against Man City) and believe they will win the title and will deserve to (and yes that was hard for me to say!).

Chris Crawley, Man Utd fan: As a United fan, it's just rivalry? Sport, or football in general, would be boring without rivalry. But, as a Manc, I'd rather City win it than Liverpool.

But what about the true neutrals? Does this anti-Liverpool sentiment span beyond the North West?

Steve Taylor, from Carlisle: If they win the league it may be necessary to evacuate the north of England. Think of the first two months of any given season and all the 'our year' chat and amplify it by a thousand. When AC Milan forgot how to play football in the second half, gifting them a Champions League win in 2005, it nearly opened a portal to the underworld. It was intolerable for years. Winning a league can't be written off as dumb luck, so there is no way they could be silenced. It cannot happen.

Scotty, Arsenal fan: It was nice seeing Liverpool lose to not go unbeaten all season and also make the title run-in exciting but, as long as Spurs don't win the league, I don't care who does out of Liverpool and Man City.

Vic Singh, West Ham fan: I want City to win, otherwise we won't hear the last of it for another 30 years if Liverpool won!

Nick Dare, Newport County fan: My rant could go on forever but I can't be bothered even talking about them. I'd rather Cardiff won it and that hurts to think about, let alone write down.

Paul: After putting up with the ABU (Anyone But United) years, I'm now a firm ABL - L does not stand for Leicester!

OK, so there's absolutely some feeling here. But equally, there were plenty of you ready to embrace a Liverpool title tilt.

Jerome Joseph Kennedy: I'm a neutral, but I don't mind Liverpool winning it if my lot don't. If you're not a Manc or an Evertonian, I don't understand what your problem would be beyond general bitterness.

Samuel Mooney, Nottingham Forest fan: I'd love to see them win it. Their fans don't bother me, they're just passionate and they believe in their team. The fact so many people hate them for their optimism is so typically English! I was gutted for them when they missed out in 2014, they played some incredible football that season, so I hope they go all the way this year. However, the way they react in their next match against Brighton following the defeat to City could make or break their season.

Kerry Nicholls, Chelsea fan: As much as I don't like Liverpool, I'd rather them win it than City. Everyone keeps saying City are still going to win it again, but I think Liverpool have a really good chance this year and I think they play better football than City. Everyone says we have plastic fans, which I agree with, but so do United and City. Unlike City, at least we can sell out our ground.

Tommy Walker, Middlesbrough fan: Most want Liverpool to win. It's just a few social media frenzy posts from a few disgruntled football social media warriors. Who would want City to win when their team has been built on money, money, money? Come on Liverpool!

Harry Robert Walden Jr, Norwich fan: I'm a huge Norwich fan and I can only say that I'd love to see Liverpool win it. It is so boring seeing the same teams winning all the trophies. I loved it when Leicester won it.

Christopher Heward: On the Liverpool hate, as a 31-year old neutral fan, I'm thinking surely we should all be hoping for anyone but Man Utd, Man City or Chelsea, who have won 13 of the last 14 titles (21 of 26!). Arsenal would be OK but Spurs or Liverpool would mean a new winner?

Liverpool used to win everything - is that part of the problem?

Tom Baird: It's the fans not the club. Liverpool are a great club with fantastic history, a good likeable manager, play great football, have nurtured players and got the best out of some average players. This Liverpool side very much reminds me of Manchester United 10 years ago. The fans though are just intolerable. Literally won nothing of note since a fluky Champions League years ago - but if you didn't know that you'd think they'd been winning stuff every other year.

Rob Freel: Fans of other clubs have always been obsessed with Liverpool, so that's nothing new. Just can't figure out if this obsession is driven by jealousy or fear that they may be back where they belong?

Ryan Ward: Much rather Liverpool than City! Liverpool fans can be annoying at times but City didn't have any fans until 2010.

Rob Fenech, Chelsea fan: I'd sooner see Liverpool win it than City to be honest. Every Liverpool fan I know is humble, a good laugh and very pragmatic about their team and their chances. City are similar to Chelsea with the financial aspect and as a Chelsea fan for more than 25 years, I remember the days before the money: when our fans were passionate, not plastic. Liverpool still have that. I just cannot understand why they're so disliked. 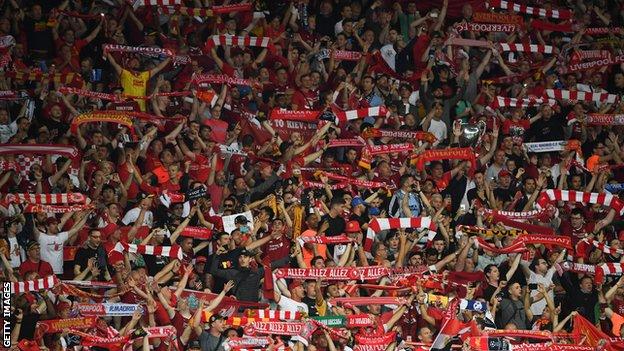 And these days, aren't Liverpool a likeable, attacking, watchable team with a fun manager?

Ben Smart: Liverpool would be deserved champions. It's about time a club that size won it. They are brilliant to watch, have a nice spine of English talent, and are providing fans with what they pay to see: entertainment. If that's backed up by trophies then even better. I'd love to see them or Tottenham win it.

Mike Durham: Wow - why is everyone so anti-Liverpool? They've played some brilliant football this season and thoroughly deserve their top spot. I just hope they don't thrash us (Brighton) on Saturday.

Gumbo 74: I would like to see LFC win it - they've been close a few times and have also invested strongly in the ground and playing group. Klopp, too, appears a genuinely good bloke. Anyone but Spurs - they really wouldn't shut up for 12 months!

Michael Fielding: I 100% want Liverpool to win the league - it makes the league much better having different teams win it for a change and, to be honest, they play the best football and their manager is pure class. Love the bloke.

Dave Robertson: The reason most clubs' fans don't want Liverpool to win the league is that in doing so it will eradicate all of their "banter" material: simple.

Jack Tanner: I bet all these fans with a bitterness for Liverpool also dismiss City's success as being bought and Tottenham for not winning anything. Can we not just appreciate football without trying to discredit every half-decent team?

It looks like being a fantastic title race and whatever your allegiance that is great news.