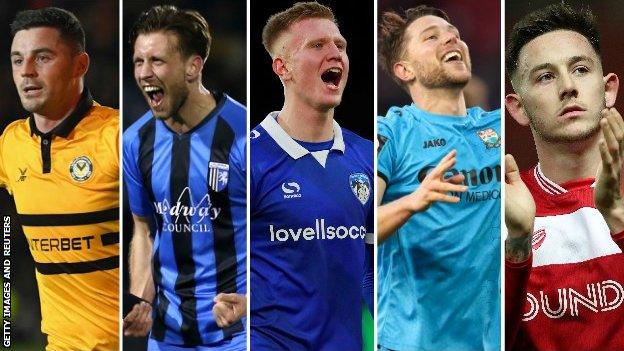 It was a weekend of shocks in the FA Cup third round.

Four Premier League teams were knocked out by lower-league opposition, while a non-league club earned a surprise win.

We asked readers to decide which victory was the most shocking and more than 50% selected Newport County's dramatic win over Leicester City as the biggest giant-killing of the third round.

Here's some more information on those giant-killing results.

Which league are the teams in? League Two (Newport) v Premier League (Leicester)

How many league places are between them? 74

Former England captain Alan Shearer on BBC One: "Newport grew in confidence - they were hanging on for dear life! But to be hit hard with the equaliser so late in the game and then show the courage to come back and win it... This is what it's about. This is why we came here."

Newport manager Michael Flynn told BBC Sport: "It was unbelievable. My voice has gone. I'm so proud of the players. They were excellent from start to finish - the amount of work they did off the ball and the chances we created as well."

Which league are the teams in? League One (Gillingham) v Premier League (Cardiff)

How many league places are between them? 46

Former Everton midfielder Leon Osman on Final Score: "Everything changes in the FA Cup. Gillingham sensed the opportunity, they got the crowd involved and made it a classic FA Cup occasion. We've got that upset that we all craved."

Gillingham manager Steve Lovell: "It means everything at the moment because it's the game we've just played and we got a result out of it. I haven't played against many Premiership teams before so it's got to be the best (of my career), hasn't it?"

Bristol City came into the game unbeaten in eight games in the Championship. Huddersfield were bottom of the Premier League after losing their last eight games. Josh Brownhill scored the only goal.

Which league are the teams in? Championship (Bristol City) v Premier League (Huddersfield)

How many league places are between them? 11

Former England defender Matthew Upson: "It was a very good performance from Bristol City - they were excellent. Huddersfield will be disappointed, especially goalkeeper Ben Hamer, who should have done better with the goal."

Bristol City head coach Lee Johnson: "I'm very proud of the team. We put in a controlled performance and were composed. Huddersfield are a great side on the ball. We had the lion's share of possession - not a mean feat against a Premier League team."

Premier League strugglers Fulham took the lead before Sam Surridge equalised from the penalty spot in the 76th minute. After Fulham missed a penalty, Callum Lang headed an 88th-minute winner for the League Two side.

Which league are the teams in? Premier League (Fulham) v League Two (Oldham)

How many league places are between them? 59

Oldham caretaker boss Pete Wild: "It is Roy of the Rovers stuff. It is one you have to savour. We rode our luck at times - in the end we managed to get the result we wanted. Credit to the players and and the effort they put in."

Sheffield United fell behind midway through the first half to a Shaquile Coulthirst penalty and never really looked like equalising.

Which league are the teams in? Championship (Sheffield United) v National League (Barnet)

How many league places are between them? 84

Chris Wise, BBC Radio 5 live commentator: It's only Darren Currie's third match in the job. We said pre-match that if anything positive happened today for Barnet then surely he'd get the job on a permanent basis.

Barnet caretaker manager Darren Currie on BBC Match of the Day: "I am proud as punch of the boys. Chris Wilder said we deserved it too. I can't put it into too many words - it is such a wonderful occasion for everyone."