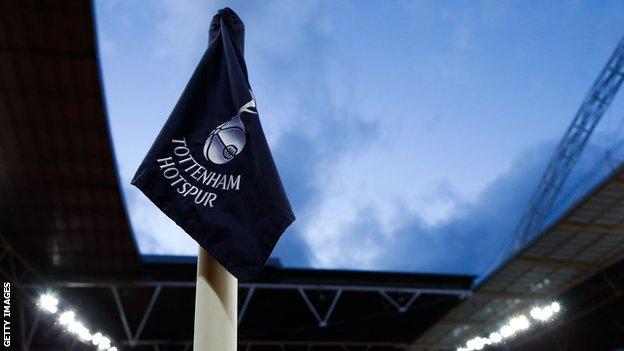 The World Jewish Congress and the Board of Deputies of British Jews want Tottenham Hotspur to act over the continued use of the Y-word by their supporters.

Tottenham have a large Jewish fanbase, who regularly use the word, but the World Jewish Council (WJC) has called on the club to "take a stand".

The bodies have also condemned use of the word by fans in reference to Spurs.

He said the word "has for years been re-appropriated from its original Yiddish to carry a distinctly pejorative and anti-Semitic message, and its use by fans in the stands, either as a self-designated nickname or as a slogan against rivals must not be tolerated in any way".

He added: "The innocence this word once carried, as a simple translation for Jew, has long disappeared, and we must be extremely conscious of the anti-Semitic connotation it now bears."

He added it was up to the club to help crack down on use of the term by its own fans, adding: "Such a long overdue action is important to kick anti-Semitism off the pitch and create a welcoming environment for all."

Three Spurs fans were arrested in 2014 for using the word during a Europa League game but the Crown Prosecution Service discontinued the cases.

Last month, Chelsea fans were criticised by chairman Bruce Buck and investigated by European football's governing body Uefa after they sang an anti-Semitic chant during the Europa League tie with MOL Vidi in Hungary.

Buck wrote an open letter to supporters condemning the actions of what he described as "a deeply unpleasant but vocal minority which refuses to join us in the 21st century".

The WJC has praised the work being done by the Stamford Bridge club in dealing with the issue of anti-Semitism.

Singer said. "Thorough education is the key to eliminating xenophobia and hatred, particularly among young people, and we urge other sporting teams and associations to follow in Chelsea's lead in bringing this message to their own supporters and players."

In a statement, Spurs said they remained wholly committed to ensuring that a zero tolerance position is adopted in respect of anti-Semitic behaviour.

"The Y-word was originally adopted in order to deflect such abuse," said a spokesperson. "We have always been clear that our fans (both Jewish and gentile) have never used the term with any deliberate intent to cause offence.

"A re-assessment of its use can only occur effectively within the context of a total clampdown on unacceptable anti-Semitism."