Chelsea have signed Borussia Dortmund forward Christian Pulisic for 64m euros (£58m), but will loan him back to the German club until the end of the season.

The 20-year-old United States international, who was linked with Liverpool and Arsenal, joined Dortmund as a youth player in 2015.

Pulisic has scored nine goals in 23 games for the US.

"It's a privilege to have signed for such a legendary club," he said.

It is the highest transfer fee for an American player, beating the 20m euros Wolfsburg paid for John Brooks in 2017.

Dortmund director Michael Zorc said: "It was always Christian's dream to play in the Premier League.

"That certainly has to do with his American background, and as a result we were unable to extend his contract.

"Against this background, we have decided to accept an extremely lucrative bid by Chelsea, given the low contract maturity."

Pulisic's contract at Dortmund was due to expire in June 2020.

'Do not doubt my passion' 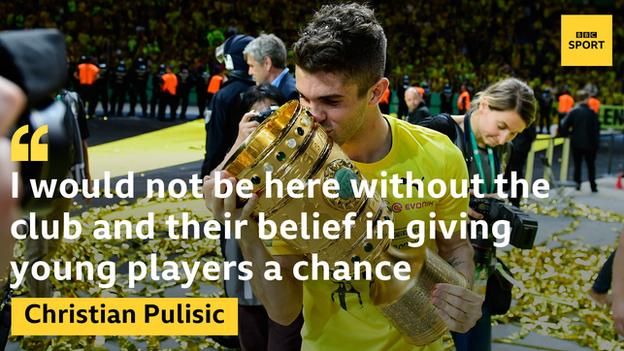 In an emotional statement on Twitter, Pulisic said he will leave Dortmund with a "heavy heart".

"It feels like only yesterday that I arrived in Dortmund as a raw, excited, very nervous but exceptionally proud 16-year-old from a small American town called Hershey," he said.

"I would not be here without the club and their belief in giving young players a chance. Many memorable moments stand out - to have experienced all of them before my 20th birthday, still feels at times like a dream.

"For the next six months, it's all BVB. Please do not doubt my passion, determination and my 110% commitment to the team right until the last ball is kicked this season."

'One of Europe's most sought-after young players'

He has played 81 games in the German top flight and 20 in the Champions League.

He has scored three goals in 18 appearances in all competitions for Dortmund this season.

"At just 20, we believe he has the potential to become an important Chelsea player for many years to come," she said.

Pulisic is the first major Premier League signing since the transfer window opened on 1 January.

His is the third highest fee paid for a Bundesliga player, after Ousmane Dembele's £135m move from Dortmund to Barcelona in 2017 and Manchester City's £55m deal for Kevin de Bruyne from Wolfsburg in 2015.

Chelsea are fourth in the Premier League, 11 points behind leaders Liverpool.

Dortmund lead the Bundesliga by six points and will face Tottenham in the last 16 of the Champions League.