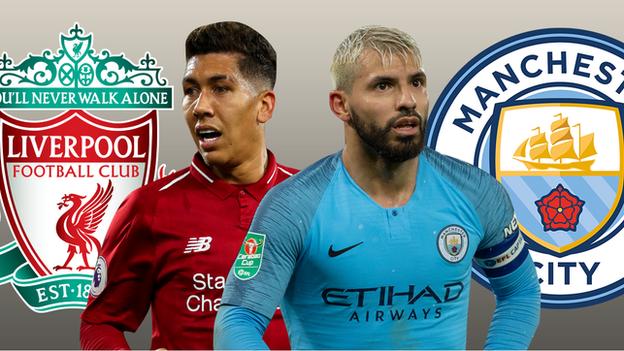 Thousands of you have been making difficult managerial decisions to pick a combined Manchester City and Liverpool XI - and now the results are in.

See below to find out who made it, plus some of the details on who missed out.

You have overwhelmingly selected Alisson as your goalkeeper. The Liverpool player was selected by 75.48% of you to beat off competition from City's Ederson and Claudio Bravo and team-mate Simon Mignolet.

Your most popular formation was a 4-3-3 and three Liverpool players and one from City make up the four-man defence.

At right-back Trent Alexander-Arnold narrowly edges out Kyle Walker, the centre-back partnership is made up of Virgil van Dijk and City's Aymeric Laporte and the Reds' Andrew Robertson takes the left-back position.

Van Dijk was the most popular defender - 93.64% of you had him in your team. After the Dutchman and Laporte, Vincent Kompany was the next most popular central defender but he was only picked by 21.30%, compared to the 37.41% who selected his City team-mate.

Your midfield is dominated by City with all three positions taken by players from Pep Guardiola's side.

Kevin de Bruyne was the most popular midfielder after being selected in 74.44% of your teams and he is joined by team-mates David Silva and Fernandinho.

Georgino Wijnaldum was picked by 19.77% of you, making him the most popular Liverpool midfielder, but that was not enough to make it into the combined XI.

The award for the most-selected player unsurprisingly goes to Mohamed Salah. The Liverpool forward was picked in a remarkable 95.05% of teams.

Most of those picks came on the right side of a front three, so he takes that position with Sergio Aguero selected as the central striker and Sadio Mane on the left flank.

Aguero was picked by 62.81% of you with Roberto Firmino the next most popular central striker on 34.19%.

Raheem Sterling was selected in 21.91% of your teams but that was not enough to keep out Sadio Mane who was more popular after being selected by 42.66%.

What the fans think...

We also asked one Manchester City fan and one Liverpool supporter to pick their combined XI. They both came up with pretty evenly split line-ups that contained nine of the same players.

The only differences were at right-back, where both supporters picked the opposite team's player, and in goal, where they each selected their own club's Brazilian.

"There is a toss-up at goalkeeper but I've gone with Ederson over Alisson," Rothband said. "He's a brilliant shot stopper, his distribution is outstanding and he plays as an additional defender.

"Robertson is an easy choice, he's probably the best left-back in the Premier League and it's an area City might have to strengthen in the transfer window.

"With Kyle Walker's drop in form over the past couple of weeks I've gone with the less experienced but hugely promising Trent Alexander-Arnold.

"I wouldn't use any Liverpool players in midfield as you can't get much better than the three I've chosen. While it's difficult to leave out Raheem Sterling I've gone for Mohamed Salah, who is an outstanding talent and Sadio Mane gets in just ahead of Leroy Sane."

And Liverpool fan Josh Sexton, of The Anfield Wrap, picked this team...

"Picking the defence was fairly straightforward," said Sexton. "The Brazil national team's coach has a decision to make between Alisson and Ederson and has mostly opted for the former, but Alisson has also been a revelation since he signed for Liverpool.

"Kyle Walker, I believe, is one of England's most well-rounded footballers. Andy Robertson has been a much more consistent option than anything City have had at left-back since Guardiola took over.

"The midfield was trickier, particularly looking at it from a Liverpool angle. The Reds have a pool of supremely talented midfielders. However, it would have been impossible to overlook the strength City have in the same department. Fernandinho is almost the perfect holding midfielder, Kevin de Bruyne is absolutely world-class, and David Silva will go down as one of the best No.10s the Premier League has seen.

"The attack is the most difficult to choose. City fans will probably scoff and point towards their superiority in the 'goals for' column, but Mo Salah and Sadio Mane are absolutely crucial for Liverpool. While it was tough to overlook Roberto Firmino, Sergio Aguero is City's all-time leading goalscorer and one of the most well-rounded strikers the Premier League has seen."

And here's what the 5 live team came up with...

When the teams met in January, only three Liverpool players made your starting XI, with eight Manchester City players included.

Forwards Mohamed Salah and Sadio Mane were included, along with then new signing Virgil van Dijk.

The £75m defender retained his place in October's combined XI alongside City captain Vincent Kompany - but another two Liverpool players were added, including left-back Andrew Robertson.