Celtic Park is a domestic fortress for the Scottish champions.

Brendan Rodgers' side have played seven games at home in the Premiership this season, and won all seven.

But on the road it is a completely different story. Nine away games and only three wins to date, with their latest defeat coming at Hibernian on Sunday.

What does it mean for the domestically-dominant Glasgow side? Could this be their undoing as they chase an eighth successive league title? BBC Scotland takes a look. 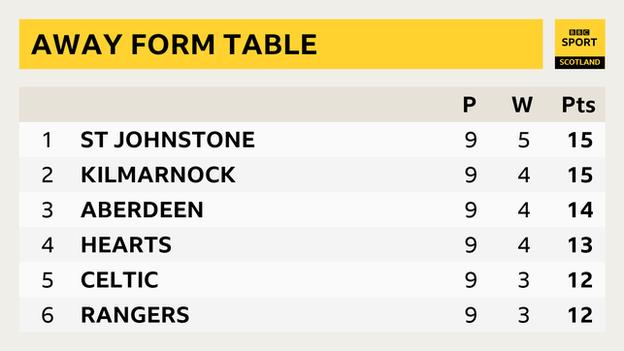 Celtic average three points per home game, but when they venture out of Glasgow's East End, that figure drops to a concerning 1.33 points per game.

With just 12 points from nine away games, Brendan Rodgers' side have only the fifth best record on the road among Premiership sides, with Kilmarnock and St Johnstone leading the way.

The most obvious reason for this comes from their inability to score in away games - St Johnstone and Dundee excepted - with anywhere near the same regularity as in front of their own fans.

Celtic have averaged 2.86 goals per home game, but only a paltry 1.78 away, around one less goal per game. Indeed, despite playing just 44% of their league games at home so far this season, they have scored 55% of their total goals at Celtic Park.

When it comes to goal-scoring, Celtic have tended to rely upon Odsonne Edouard, James Forrest and midfielders such as Ryan Christie and Olivier Ntcham in the league this season. Yet their individual form has varied wildly in home and away games.

Celtic's playmakers also seem to struggle at away grounds. Although Kieran Tierney and Tom Rogic have played better in away games this season, Callum McGregor's assists per 90 minutes drop from 0.41 at Celtic Park to 0.13 away. And Ntcham's average drops from 0.22 per home game to another zero away.

While Rodgers relies on other players to score and create Celtic's goals, Scott Brown still plays a significant role at the base of midfield. But the captain, too, has seen his passing stats plummet outside the comforts of Celtic Park.

Similarly, the 33-year-old's average passes directly into the opposing box stands at 0.87 per home game, but that falls to just 0.23 away from home.

How does it compare to previous seasons?

Last season, over the course of the entire campaign, Rodgers' men averaged 2.2 points per away game. The year before that it was 2.7 points per game.

It is still relatively early days, but this season Celtic are averaging just 1.3 points on the road.

If that trend persists over the whole season, it would bring 16.5 points less than last season, when Celtic finished nine points ahead of Aberdeen.

'It's where the league will be won or lost' - analysis

Away form is massive. Celtic have won three out of nine. They've not played Aberdeen or Rangers away yet. They've only won three - against St Johnstone, Hamilton and Dundee.

In the away form table, Celtic are fifth, Rangers sixth, Hibs seventh. Kilmarnock are sitting top. That just shows you the consistency they have.

If any team can string consistency together away from home, they'll get themselves away at the top of the table.

That's where the league will be won or lost this year.