Sterling, 24, posted on Instagram on Sunday saying newspapers are helping to "fuel racism" by the ways in which they portray young black footballers.

Sterling was allegedly racially abused during City's 2-0 defeat at Chelsea.

"It is evident that he is often singled out and treated more harshly than his colleagues," said a union statement.

"As such, these stories are fuelling racism within the game, as reports of racist abuse continue to rise.

"We have been aware for a few months of the targeting Raheem faces in the press."

Chelsea and the Metropolitan Police are investigating the claims from Saturday's Premier League match at Stamford Bridge.

England international Sterling said he "had to laugh" when he heard the alleged racist remarks because he expects "no better".

"All I have to say is have a second thought about fair publicity and give all players an equal chance," he added.

According to figures from anti-discrimination charity Kick It Out, reports of discriminatory abuse in football increased 11% last season - a sixth successive annual rise.

Last week, a man was charged after a banana skin was thrown on to the pitch during Arsenal's 4-2 win over Tottenham at Emirates Stadium.

The Professional Footballers' Association (PFA) said it condemns the increase in racial abuse its members have been receiving and encourages all clubs to "take the strongest possible action for fans found guilty of racially abusing players".

Its statement added: "While it may be true that no racial slurs have been used in the press coverage received by Raheem and others, we are in no doubt that the negative narrative influences public opinion and emboldens racist rhetoric."

Simone Pound, PFA head of equality and diversity, said: "Raheem has made a stand by speaking out and we stand shoulder to shoulder with him against the discrimination of which he speaks. We all have a part to play in tackling racism and discrimination and certain sectors of the media must be held to account.

"The PFA are resolute in their work, challenging and tackling equality issues on behalf of the players."

'Reaction to my story was bizarre'

The headline referring to 21-year-old defender Adarabioyo - who is on loan at West Brom - focuses on how he spent £2.25m on a property "despite having never started a Premier League match".

By contrast, midfielder Foden, 18, "buys a £2m home for his mum" and is later described as having "set up a future".

Anthony Joseph, who wrote the Mail Online article about Adarabioyo, has described the reaction to his story as "astonishing", saying it was "topical and not based on race", and a follow up to a story in the Sun.

He says he has received racist abuse over it, including since Sunday.

"The story was done in January at a time when BT aired a documentary on teenage footballers who are earning millions. It was topical and there was a huge debate about it. The same day there was at least an hour segment about the same issue on Talksport," said Joseph.

"I spoke to the player's agent, who had no issue with the story at the time and how it was represented."

Joseph says Mail Online stories are written by a different title and editorial team to the Daily Mail, which published the article on Foden.

"Reporters don't do headlines at Mail Online but I still don't feel it vilified him at all," added Joseph. "Nor did I even make a connection of his colour - it didn't even cross my mind.

"The reaction to my story was bizarre at the time. Ironically, I received quite a lot of racist abuse for it - and have done again since the story was brought up yesterday [Sunday]. People have been trying to call out alleged racism with actual racism towards me - it's been astonishing.

"Raheem Sterling raises some very valid points that the media need to listen to. If he feels he is being targeted by the media, as a whole, for his race, it needs to be looked at. And I know it has been debated for quite some time.

"But I can only explain the story I wrote - it was topical and not based on race."

Meanwhile, Ian Murray, executive director of the Society of Editors, told Radio 5 live: "I don't believe that there's a single journalist on a national newspaper, or working anywhere in the mainstream media in this country, who actually sets out to be racist or to incite racial hatred in that kind of a way.

"I think Raheem Sterling had a point when he showed the comparisons about the way he and some other black players are portrayed.

"Taken as individual articles, they would probably say there's nothing wrong with that, but then let's have a look in comparison and the point that he's making, and say, 'Is it fair? Is it a level playing field?'

"I think there will be some soul-searching going on in newsrooms today, and discussions saying, 'Well, are we being fair?'"

Sterling has frequently found himself at the centre of attention throughout his career, most recently for a tattoo of a rifle on his leg earlier this year.

He later defended the tattoo, saying it had a "deeper meaning" and referred to his late father, who was killed in Kingston, Jamaica.

That followed criticism for proposing to his girlfriend, purchasing clothes at high-street chain Primark and for buying his mother a house.

In June, in a piece with the Players' Tribune, he said he no longer worried about criticism of his lifestyle.

Sterling divided opinion at this summer's World Cup in Russia as England reached the semi-finals for the first time since 1990.

Some criticised his finishing while others praised his tireless attacking runs.

Before the defeat by Croatia in the last four, he had the lowest average score in the team on the BBC's Player Rater tool, where the public give their ratings.

Frenchman Evra, who was racially abused in 2011 by then-Liverpool forward Luis Suarez, said: "How does this happen still in 2018?"

The 37-year-old posted on social media: "It doesn't matter what colour your skin is, or your religion, or what country you are from. We need to be kind to each other.

"Love is so much more powerful than hate."

Jurgen Klopp, who joined Liverpool as manager in October 2015 after Sterling had already left for Manchester City in the July of that year, said the forward's reaction during the game at the weekend was "brilliant".

"I'm not surprised that these things happen," Klopp said. "It doesn't stop just because we talk about it, but I like the fact that we point our finger at it.

"You cannot say what you want. We should try to find the right amount of attention for these people. Yes, punish them, but don't talk too much about them because they don't deserve that."

Liverpool forward Rhian Brewster, who has spoken of being the target of racial abuse five times, posted on social media: "Just when you thought things had changed for the better..."

The 18-year-old, an Under-17 World Cup winner with England last year, told the Guardian in December 2017 that Wolves' Morgan Gibbs-White was racially abused during the 5-2 win over Spain in the final.

His complaint was dismissed by Fifa because of a "lack of sufficient evidence". 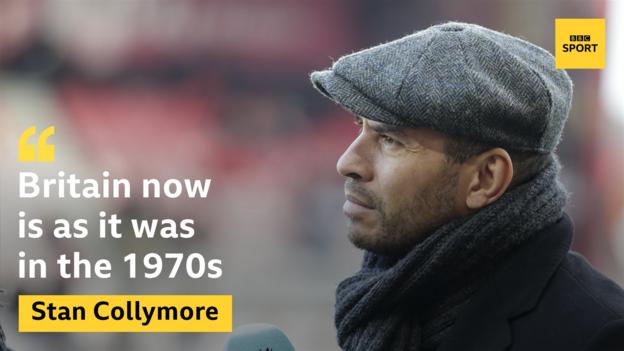 Analysis - 'We have to reconstruct the whole narrative'

"I wasn't surprised at all. It's what we've become used to over the years because football hasn't done enough to protect black players on the field of play and fans have become increasingly emboldened to go to football matches and vent. We've created what we loosely term as 'atmosphere' but within that whole culture anything goes and people do invariably cross the line.

"People feel that they can go to live television games where they know they will be in full view and malign the footballers in the way that they do.

"This is a problem. I've been working at the Daily Mirror for 18 years - we have never ever dealt with it. We give a small amount of time to it, everybody wrings their hands and says how depressing, sick, vile and disturbing it is, and then we move on. We never do anything substantive to protect black footballers when they go to work on the field of play.

"We can't frame debates as to whether someone is right or wrong about not wanting to be abused on the basis of the colour of their skin. There is no debate around racism. What we should be debating is where we can move forward together. If we can do that then we will be able to help Raheem and the other black players.

"We need to have more stringent punishments for people. Social media in these situations is brilliant because it gives people no place to hide.

"We now have to reconstruct the whole narrative about the way we deal with stories like this. We have to be more open, give more time to it and we have push for something together."

Reaction - 'There is a blame culture at play'

Stan Collymore, former Premier League striker, in his column for the Guardian: "Britain now is as it was in the 1970s.

"People again feel free to be openly racist, saying and writing the types of things that vilify certain sections of society for no other reason than the way they look.

"There's a blame culture at play and, more often than not, it's black and Asian people who get the blame."

Viv Anderson, England's first black international, in the Daily Mail: "We've become complacent about racism. We think that because we live in a more multi-cultural society that it's been eradicated, which is utter nonsense."

"Are we going to continue to allow this type of racist behaviour go on?" asked former Manchester United and England defender Rio Ferdinand, while Match of the Day pundit and ex-Arsenal striker Ian Wright said "the bad old days are back".

"No matter how strong of a character you are, you can only take so much - so for him to come out now and speak, enough is enough.

"No-one should have to go through what he's been going through. No-one."

This clip is originally from the Football Daily podcast on Monday, 13 August 2018.