They are two Jamaica-born England internationals playing 30 years apart, but racism has proved an issue for both.

Barnes famously backheeled a banana skin off the pitch in a game at Everton in 1988 and tells BBC Sport that the problem has not gone away since his playing days.

"It's been well documented over the years," says Barnes. "For any black player in the 1980s it would have been the same old racist chants, bananas on the field - just something that was an accepted part of society and football.

"Maybe the overt racism that I experienced, you may not have seen in the last 20 years. Now, with the Raheem Sterling incident, maybe it has reared its ugly head again.

"I, for one, never thought that it had went away - you just never heard it because people kept their mouths shut."

You had banana skins thrown at you. What did you make of a similar incident at Arsenal against Tottenham recently?

"It didn't surprise me because black people go through invisible banana skins being thrown at them and unspoken racial abuse every day of their lives.

"The very fact that now a real banana skin came on and there was real abuse doesn't surprise me at all. I just thought it was to be expected."

You didn't think this is a return to the bad days?

"Those days haven't gone. They have gone in terms of the overt racism. In many respects, I much prefer the overt racism now to the racism we went through in the last 10 years whereby we are being told that it doesn't exist so, therefore, let's get on with it. I knew that not to be true.

"In many respects, I'm glad it happened because it will bring home to people that we have still got a long way to go and it is still alive and kicking."

Has anything really changed since your day?

"The only way it has changed is that you don't hear it any more. In terms of the perception people still have of blacks, Muslims, gays, women in power - we still hold on to those misconceptions and perceptions based on what we have been wrongly told." 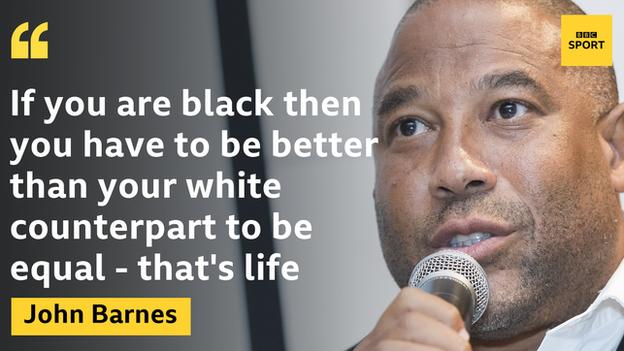 How did you deal with it as a player?

"I came from Jamaica as a 13-year-old from a middle-class Jamaican family who never experienced racism before. It never affected me because I was fully confident of who I was. It never got me upset, angry - I laughed very much like Raheem said that he laughed because he didn't expect any better.

"For me, that is the right way to deal with because how can you let ignorant people affect you - I've always said that."

How should the current players deal with it?

"A player who wants to fight, kick and scream, complain and walk off the field - you do that. There is no right or wrong way to deal with it."

Is the negative coverage of Raheem Sterling a race issue?

"It's not as simple as saying that it is a race issue because you have white players who go through that as well but I think the colour adds to it.

During your career, you were seen as a scapegoat by the media. Sterling gets that as well, do you draw parallels with his situation?

"A lot of that is based on him being black as well so it is the negative perception they have of him. I do draw parallels with that but, on the other hand, it was to do with the misconception of my commitment to England. I don't think they are saying he is not committed to England because he was not born in England which is what was thrown at me."

"Forget about football, we have to stop compartmentalising it and thinking it is a problem in football and the rest of society is fine. We have to look at it holistically and as a whole and say let us tackle racism or discrimination in life. Then you can look to get rid of it in football. The only way you can do that is first to deconstruct the idea of where racism came from.

"Racism comes from the fact that for the last X amount of years, the history that we have learnt - what we have been told about different groups of people - have put a certain group of people above the other, which is a lie."

Are the punishments out there enough of a deterrent?

"Punishments are a deterrent in terms of if you want to watch a football match. Punishments aren't a deterrent for you to change your perception of black people or women or homosexuals. All you have to do is keep your mouth shut.

"If you think punishments are the answer, it is not the answer. It is the answer if you just don't want to hear it and I think that is what football and society would be happy with. As long as we don't hear or see it then that is OK.

"Society has to do more, not football."

What about when you were a manager?

"I don't differentiate between racism in football to racism in life so, therefore, as a football manager I knew that I would get racist abuse. If I'm doing well and winning matches I will get no abuse. They will love me but as soon as I start to lose matches, not only won't they not like me, they will look at something which they consider to be negative to focus on that.

"He will still get sacked but he will be given more time because of the perception we have of their capabilities. That's no different from anybody else in any industry. If you are black then you have to be better than your white counterpart to be equal. That's life."