Arsenal will head into next weekend's north London derby on the back of a 17-game unbeaten run after Sunday's win at Bournemouth.

But will the resurgent Gunners take on Tottenham using the new 3-4-3 formation that saw them beat the Cherries? And where does that leave Mesut Ozil, who was left out of the team that triumphed on the south coast?

While Arsenal boss Unai Emery has shown he is willing to change his team and tactics depending on the opposition, it is harder to see his Chelsea counterpart Maurizio Sarri shifting from his trademark 4-3-3 shape.

The Blues came unstuck - and lost their unbeaten record - in spectacular style in Saturday's defeat at Spurs, but could they get some of the defensive improvement Sarri craves by changing N'Golo Kante's midfield role?

MOTD2 pundit Matthew Upson looks at what both managers got right and wrong - and what they might do next in their battle for a top-four spot.

Where does Ozil fit into this formation?

Upson: Arsenal's 3-4-3 formation fitted pretty much everyone who was in their team on Sunday - but the one person it might not suit is Ozil, who was an unused substitute at the Vitality Stadium.

Ozil is Arsenal's best number 10, but there is no number 10 when you play in this shape. The question is whether Emery is willing to play him elsewhere in his midfield.

When Emery was asked why Ozil did not play against Bournemouth, he said it was because he was expecting "a very demanding match with physicality and intensity".

But it was not down to Ozil being tired - he is not being considered for selection by Germany so he has not played since the draw with Wolves on 11 November.

It seems unlikely he was being rested for Thursday's trip to play Vorskla Poltava either - he has not started a game in the Europa League this season, and the Gunners have already made sure of their progress from Group E.

So, I would not be happy if I were Ozil. It's a big statement for your manager to say that an experienced player like him is not up to playing in a match like this one.

Only the line-up for Sunday's game against Spurs will tell us exactly what Emery is thinking, and where Ozil fits into that, but it is not a surprise to see any Arsenal player omitted these days.

We are only four months into his first season in charge at the Emirates, but Emery has already made it clear he is not afraid to make those kind of decisions around his big players.

That in itself is very different to the way his predecessor Arsene Wenger approached things.

Wenger was more likely to stick to his favoured style, regardless of who Arsenal were playing, and he certainly was not one to drop players like Ozil in situations like this.

Why three at the back suited Arsenal so well

Upson: Sunday was the first time Arsenal have played with three centre-halves under Emery in the Premier League.

We don't know whether he chose this formation specifically to deal with the Cherries, or because he wants to start using it regularly but, either way, it worked.

Could he stick with it? Well, looking at the centre-back pairings that Emery has got, there is not really one that has stood out so far and I think it might help his situation at the back to play with a three.

It also definitely suits Hector Bellerin and Sead Kolasinac - who set up both goals against the Cherries - to play as wing-backs as opposed to full-backs.

It means they can both attack more without worrying about their defensive responsibilities, and they both caused Bournemouth plenty of problems with their over-lapping runs down the outside.

By doing that, they allowed Henrikh Mkhitarayan and Alex Iwobi to come inside, and ask different questions of Bournemouth. For example, Cherries left-back Charlie Daniels had to track Mkhitaryan, leaving a winger, Ryan Fraser, in a role he does not want, dealing with the pace of Bellerin, and his runs behind him down his flank.

Defensively too, they were pretty solid, considering they were away from home against a team who were the division's fourth-highest scorers going into the weekend.

I know Bournemouth had their moments and Joshua King scored a great goal to make it 1-1 but, otherwise, he and Callum Wilson were kept pretty quiet - and we have seen what they have done to other teams this season.

Emery says he is looking to control matches better and Arsenal did that. All in all, it was a very impressive win and an important one too against a team who were just below the Gunners in the table. Upson: In contrast to Emery, Chelsea boss Sarri appears far more rigid with his tactics - but I wonder if he might be tempted to tweak things in future after what happened this weekend.

It was quite interesting that Sarri went to Wembley with Jorginho continuing to play on his own as a sitting midfielder when he has someone like Kante to call upon.

We know how good Kante is at shielding his defence but this season he has been asked to play further forward, alongside Mateo Kovacic, with Jorginho behind them.

It has obviously been working pretty well - Chelsea were unbeaten before this weekend - but some of the flaws in that set-up were exposed by Tottenham, who used Dele Alli to sit on Jorginho to stop him from dictating play, and also attacked the spaces between the Chelsea midfielder and his back four.

To stop that happening again, Sarri could easily flip things so that he has a deeper pairing of Kante and Jorginho with, say, Ross Barkley operating in front of them.

I don't know why Barkley did not start against Spurs because he has been in great form and having him in the team would allow Kante to focus on what he is best at.

Kante is better off in the engine room because he likes to win tackles or dispossess people and then burst forward, as opposed to being more advanced anyway and receiving the ball higher up the pitch.

Who will miss out on a top four spot?

Upson: Chelsea were so bad on Saturday they have come in for a lot of criticism, but I think it is wrong to say that game shows Sarri's side have been found out.

Jorginho has shown he can set the tempo for the way they want to play but I don't think stopping him means you stop the Blues - they have far too many other good players for that.

If sides press him, like Spurs did with Alli, you leave space elsewhere and - most of the time - Chelsea will be capable of capitalising on that.

The biggest reason they did not do that this weekend was because of how good Spurs were - it was a day where Mauricio Pochettinho's side were exceptional in and out of possession, and it is hard to stop them when they are in full flow like that. 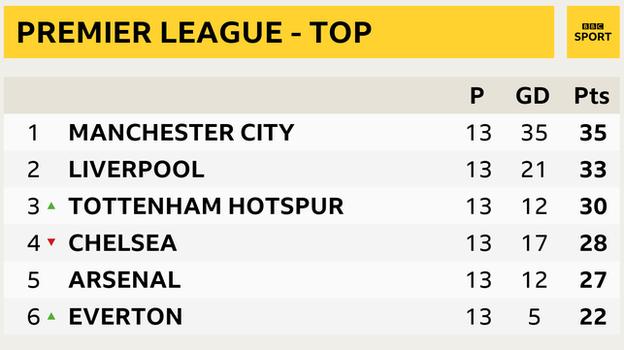 Along with Arsenal, all three clubs are battling for a top-four spot - and with Manchester City and Liverpool so dominant, it appears one of them will miss out.

Who will it be? Well, in terms of their squad strength and players, I would say the Gunners are slightly behind Chelsea and Spurs at the moment but, in terms of getting results, they are definitely good enough to be in the mix.

Emery is playing a big part in that. It is still early days for him but tactically he is so adept that whoever Arsenal are playing, they will always have a chance.