Manchester United were held at home by Crystal Palace and Arsenal maintained their impressive form to win at Bournemouth.

Meanwhile, Liverpool kept up the pressure on leaders City with a victory at Watford, Everton edged their contest with Cardiff and Brighton and Leicester drew on the south coast.

There were also important victories for Huddersfield at Wolves and Fulham against Southampton. 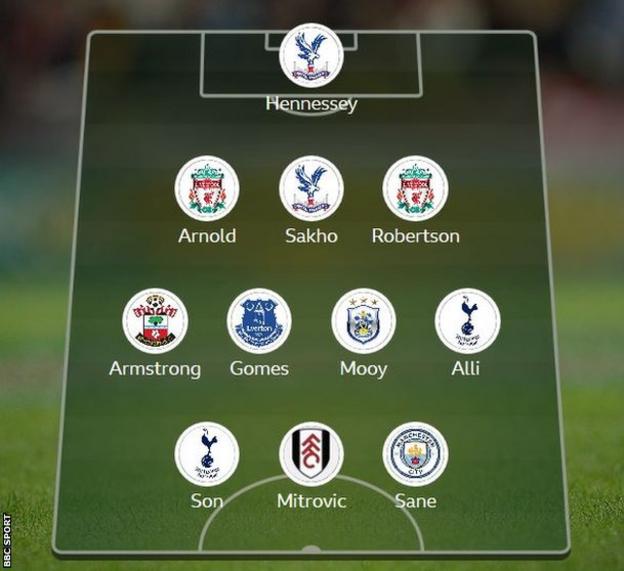 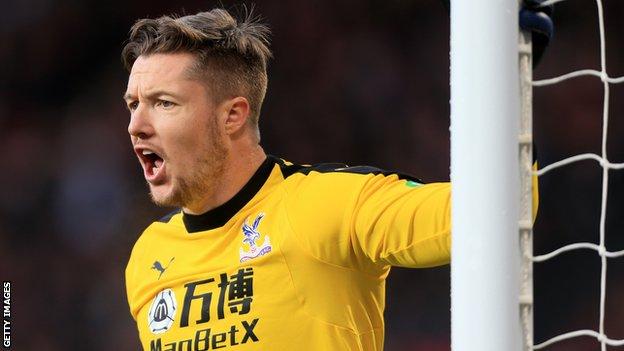 Having not won in seven matches, Crystal Palace were desperate to get something out of their game against Manchester United. The block from Anthony Martial by Wayne Hennessey was important, but the save from Jesse Lingard was sensational.

Hennessey then went on to make a superb save from Romelu Lukaku's header at full stretch. As uninspiring as United were they produced enough chances to win this match, while Palace could also have stolen a victory. A point was probably fair in the end but Hennessey was the difference for Palace.

Did you know? Hennessey made five saves for Crystal Palace to earn the Eagles their very first Premier League clean sheet at Old Trafford. 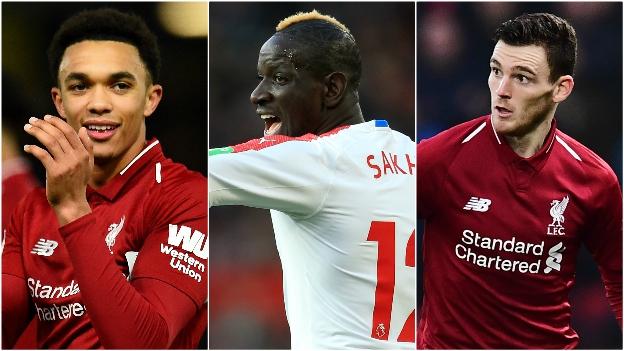 Trent Alexander-Arnold: You've got Mohamed Salah, Jordan Henderson and Roberto Firmino, all of whom are superb from a dead ball position.

Yet the most inexperienced lad on the pitch stepped up, assessed the situation like a veteran and proceeded to leave Ben Foster in the Watford goal rooted to the spot and staring at the ball as it flew past him.

Mamadou Sakho: I've seen Mamadou Sakho have games that have had me hiding behind the sofa. He can be brilliant on his day but he can also be the master of disaster.

Against United he was brilliant, showing composure and leadership in equal measure. I suggest Sakho remembers every second of his performance at Old Trafford and refuses to depart from the things that made him excellent on the day.

It's time he ironed out his calamities because there is an exceptional defender in there somewhere.

Did you know? Sakho made three interceptions and nine clearances against Manchester United, helping the Eagles to a clean sheet.

Andrew Robertson: He was lucky not to concede a penalty at a crucial time against Watford but the Scot got away with it. I'm not entirely sure even video assistant referee (VAR) would have changed the referee's mind.

The full-back went on to cause Watford all kinds of problems going forward. It was Robertson's tenacity and eventual cross that finally killed the Hornets off completely.

With Alexander-Arnold on one side and Robertson on the other, it's been a long time since I've seen two such impressive young full-backs in the same team.

Did you know? Robertson whipped in more open play crosses than any other Liverpool player in the Reds' win over Watford, also helping them keep a clean sheet. 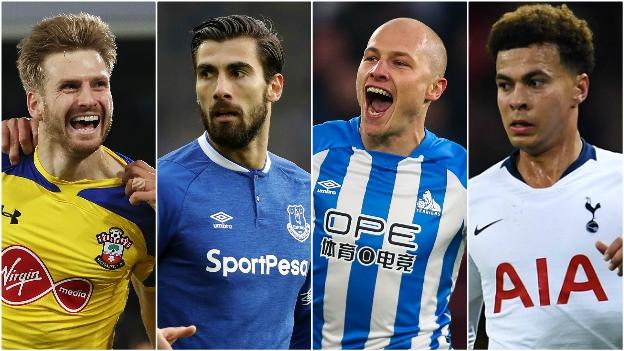 Stuart Armstrong: I enjoyed watching this lad's performance for Southampton.

He took his second goal especially well but it looked like cramp robbed the Scottish international of a possible hat-trick. Playing for Celtic is one thing but playing in the English Premier League takes some adjusting to.

If Armstrong had stayed on the field then the outcome for the Saints might have been very different. Mark Hughes has unearthed a player - I wonder if he's going to be given the time at Southampton to develop him.

Did you know? Armstrong scored a competitive brace for the first time since December 2016 when he did it for Celtic against Partick.

Andre Gomes: I thought Andre Gomes was really unlucky not to be in my team of the week after his performance against Chelsea at Stamford Bridge.

The Portugal international is very tenacious which can sometimes overshadow the fact that he is very comfortable on the ball and can see a pass.

Against Cardiff, who are an increasingly difficult side to play against, Gomes was the only Everton player who kept hurting them. Gylfi Sigurdsson may have got the goal but it was Gomes who wore them down.

Did you know? Gomes made two tackles, two interceptions and made 57 passes in Everton's 1-0 victory over Cardiff City.

Aaron Mooy: Well this result really sets the pulse racing for those clubs at the foot of the table. Mooy was outstanding and his two goals against a poor Wolves took Huddersfield out of the bottom three and left Southampton in deep trouble.

This was a fantastic victory for the Terriers but now makes it a very difficult week for Mark Hughes.

Did you know? Mooy's brace was the first time any Huddersfield Town player had scored more than one goal in the same Premier League match since he himself did so against Watford back in December 2017 - 344 days ago.

Dele Alli: Spurs could have won this game by five or six goals and Chelsea couldn't have complained.

On the day three goals didn't tell the true story of just how poor Chelsea were in defence. Alli looks to have a spring in his step again as the England international tormented Chelsea with his movement and clever touches. I've seen Alli in this mood before against Chelsea. He clearly enjoys the big games.

Did you know? Alli has scored more goals against Chelsea in all competitions than he has against any other side (6). 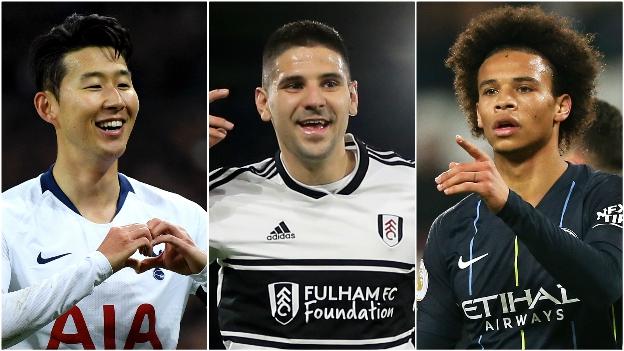 Son Heung-min: The way Son breezed past Jorginho to score a goal his performance richly deserved made the Chelsea midfielder look pedestrian.

Meanwhile David Luiz - who on his day can be one of the best defenders in the world - is having one of those seasons where he has no intention of getting hurt. If Andreas Christensen has anything about him the Danish international will be knocking on Maurizio Sarri's door demanding he starts the next game instead of the Brazilian. If a defender isn't prepared to get hurt he has no right to be on a football field.

Did you know? Son's strike was his 50th goal for Tottenham in all competitions, coming in his 154th.

Aleksandar Mitrovic: This is a player who knows what he's doing in front of goal. His second was a most impressive finish and a reminder of how good the Serb is.

There is no doubt that Mitrovic is a player but if he were to lose a stone in weight and get really fit what an asset Fulham would have then. Claudio Ranieri got away with this result and needs reinforcements fast if he's to stay in the top flight.

He needs to get in touch with Danny Drinkwater. The midfielder is twiddling his thumbs down the road at Chelsea and needs to rebuild his career. Who knows Drinkwater better than Ranieri?

Did you know? Mitrovic has scored more headed goals than any other Premier League player this season (4).

Leroy Sane: This kid really is a bit special. He sometimes doesn't get the plaudits he deserves due to the occasional petulance.

However you must remember the German is still only 22 and has a lot of growing up to do and his best football is still ahead of him. Any player who can sit two defenders on their backsides in their own six-yard box and then put the ball in the back of the net as he did against West Ham gets in my team of the week.

Did you know? Since the start of last season, no player has both scored and assisted in more Premier League games than Sane (7 - level with Mo Salah).

I used to hate dressing room bust-ups regardless of how necessary they might have been at the time. Players falling out with each other always troubled me but they are often necessary in order to clear the air and to set the team back on track.

The recent concerns about the Professional Footballers' Association, aired mostly by disgruntled former players, have forced the union to initiate an independent enquiry.

Whatever the outcome of that enquiry, what the PFA needs now, more than at any stage in its history, is a chairman who will unite the players, young and old, once again and I can see no better individual than Vincent Kompany.

He has proven to be a unifying figure on the field and is admired throughout the game.

What the former Belgian international and PFA delegate at Manchester City plans to do when his playing career finally comes to an end is his own affair but while he is a contracted player, this well-known senior figure owes it to his fellow professionals to bring the players back together again.

Heaven knows it needs a special individual right now to heal the rifts but if anyone can do it, Vincent Kompany can.