Six defeats from eight matches in 2018 does not make great reading for Scotland. Neither does 13 goals conceded in that time.

But perhaps the most damaging statistic is that Alex McLeish's side have scored only four goals so far this calendar year. One of those was an own goal, another a penalty, and of the two that Steven Naismith scored, one was a consolation in a 3-1 defeat by Portugal.

The absence of Naismith and fellow striker Leigh Griffiths because of injury for the Uefa Nations League games against Albania and Israel has left a vacancy in McLeish's attack.

But who can fill the void? BBC Scotland assesses the options...

Four players, 10 goals... six of them against Gibraltar 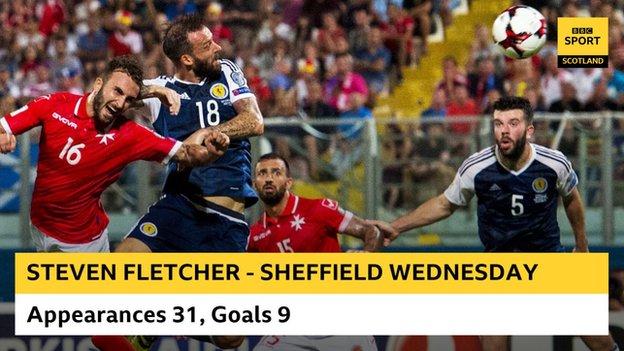 Recalled 13 months after his last cap, Steven Fletcher was one of the most notable inclusions in the squad. The Sheffield Wednesday forward had not featured at all since McLeish took control for a second time in early 2018.

Fletcher continues to be something of a conundrum for Scotland. He had a much publicised absence from international duty during Craig Levein's tenure, meaning he did not feature between August 2010 and October 2012. During that period, he scored 29 goals, mostly in the Premier League in England.

Since returning to the international fold, he has scored 27 club goals in six years but most of those have been in England's Championship. He has three in 18 games this term.

With nine goals for Scotland, Fletcher is by some distance the top scorer in the squad but six of those - two hat-tricks - came against Gibraltar.

He's only 31 - still a young boy, really - and he's playing regularly for Sheffield Wednesday. He's been there and done it and I think he'll start through the middle.

Steven's been there. He's experienced enough. If you're looking for an option that holds the ball up well, technically good, always a goal threat then Steven's more than capable of filling that void.

I think he will be a shoo-in to start. I don't think a guy that's been out for 13 months, you would just bring him in to almost supplement the squad. He's brought him in knowing that he'll probably play. 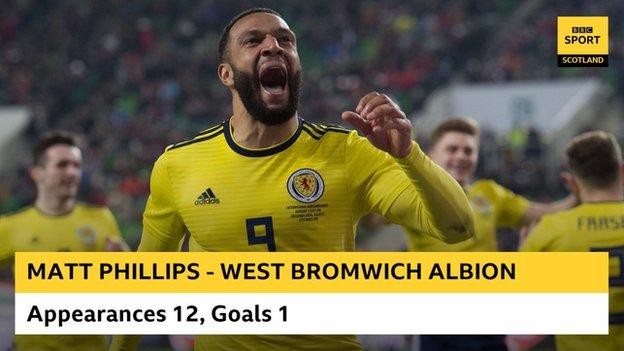 Unlike Fletcher, Matt Phillips has been involved in McLeish's squads this year and netted his debut international goal in the March win over Hungary.

He started as a lone striker in the friendlies against Costa Rica and Peru, as well as against the Hungarians, but his versatility means he could play with a more recognised number nine like Fletcher.

Phillips, 27, has scored five times in 14 club appearances this season for West Brom and offers pace as well as power at the apex of the attack.

The 27-year-old's recent record at club level of four goals in 13 appearances is superior to that of Fletcher (three in 18).

Matty Phillips has done the job up front for Scotland and Alex McLeish seems to like him in that role. 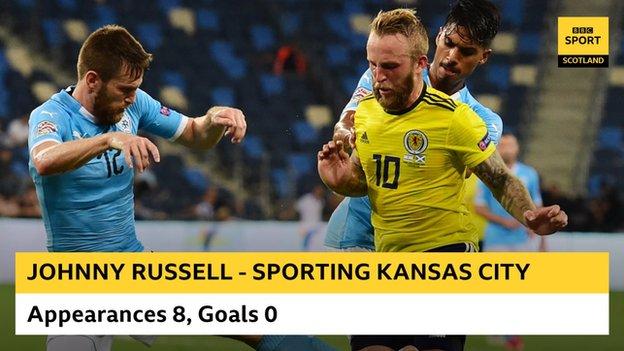 Though lauded for some of his performances at international level, Johnny Russell is yet to score for his country.

The former Dundee United and Derby County forward proved a good foil for Naismith in the opening 2-0 Nations League win against Albania at Hampden and has scored 10 goals for Major League Soccer side Sporting Kansas City this term.

Should McLeish persist with his 3-5-2 formation, Russell seems a good bet to keep his place playing off one of the other strikers.

Johnny Russell is playing at a real good level - man of the match displays in America, involved in the play-offs. His contribution to Scotland over the previous games has been superb. He adds pace, he's clever, he can get hold of the ball. 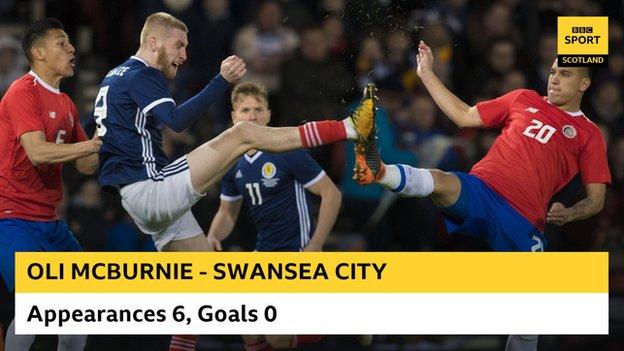 Swansea City striker Oli McBurnie may be the underdog to lead Scotland's attack but he has scored more club goals this season than either Fletcher or Phillips - seven in 18 games.

He started in the friendly defeat by Portugal and came on in Israel last month, and has had a substantial amount of game time under McLeish in the past few months.

McBurnie has also proven he can score goals at under-21 level under Scot Gemmill's command.

McBurnie's started a game or two, and has been around the squad. Again, he's having a decent goalscoring start to the season with Swansea.

From what I've seen of McBurnie, he's not set the heather on fire playing for Scotland.

Is Paterson a left-field solution? 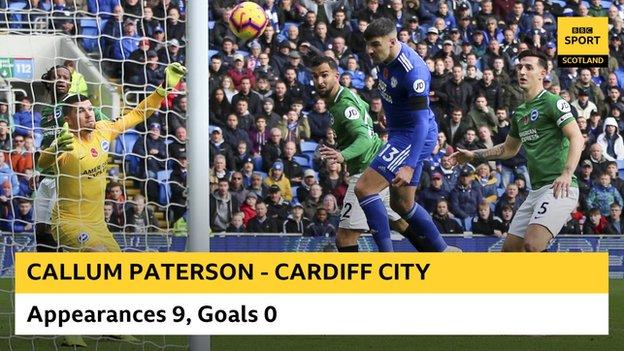 The 24-year-old has won each of his nine caps at either right-back or right wing-back, and is notionally in the squad to cover those positions.

However, he has been deployed as a lone striker by Cardiff City in recent Premier League matches, scoring three goals in four games, and broke through at Hearts as a centre forward.

Callum Paterson plays in a team that's so suited to their style of play and the athlete that he is. But I don't see his attributes being a link man holding it up and that is vital.

If you're playing away from home, I think you would be a little more inclined to play on the counter and I think Cardiff have been trying to do that. So why would you not throw him in there? He's got pace, he's got power, he's good in the air. If you're playing that out-and-out lone striker who wants to run the channels and be a nuisance all night, Paterson might be your man.

So what does McLeish do?

Both Celtic's James Forrest and Bournemouth's Ryan Fraser could also be considered, with the pace of the wingers a potential counter-attacking weapon in Albania. Between them, they have scored 11 times this term for the clubs.

But neither have scored for the national team. Celtic's Callum McGregor hasn't either. Nor midfielder counterpart from Aston Villa John McGinn.

In fact, among the rest of the squad, only captain Andrew Robertson and midfielder Stuart Armstrong have international goals to their name. And by goals, we mean one each.

So who would you select to play in attack in Shkoder?

My Scotland team to face Albania