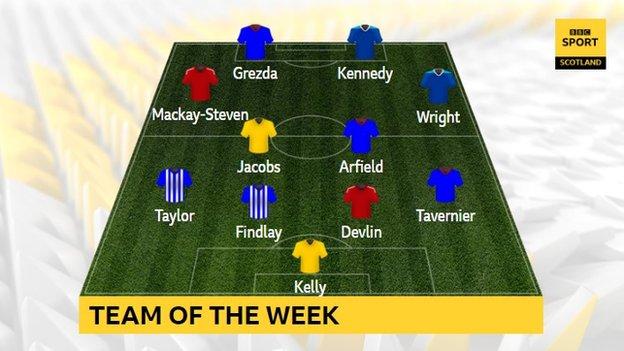 Premiership strikers are quickly finding out that, even if they manage to get the better of Livingston's defence, they still have the challenge of trying to beat one of Scotland's best young goalkeepers. Kelly, 22, pulled off a series of superb saves in Sunday's goalless draw with league leaders Celtic.

Another goal and a couple of assists in Sunday's 7-1 mauling of Motherwell to add to James Tavernier's already impressive total. The Rangers captain has netted all eight penalties he's taken this season. This latest one had an added degree of difficulty in that he had to take it twice. Tavernier just doesn't miss.

Former Hamilton captain Michael Devlin is proving to be a hugely significant signing for Derek McInnes, and his inclusion in the Scotland squad confirms his pace of progress. The much-improved Aberdeen defence has lost only one goal in the last four games and that was a crazily-conceded penalty.

Kilmarnock boss Stevie Clarke was pleasantly surprised that former Celtic youngster Stuart Findlay didn't get a better offer in the summer than a permanent switch from Newcastle to Rugby Park. Not that he was complaining. The 23-year-old central defender delivered another top performance at Tynecastle on Saturday as Kilmarnock moved to within two points of the Premiership.

Greg Taylor featured in a fascinating head-to-head with Hearts winger Calumn Morrison at the weekend and it was the Kilmarnock youngster who came out on top. Another example of a player who's been given a specific job to do by Clarke and who consistently delivers the goods.

Drey Wright made the cut for me last weekend and he keeps his place courtesy of another outstanding showing. The former Colchester winger tormented Hamilton defender Ziggy Gordon all day long at McDiarmid Park and created the first two goals.

Scott Arfield turned in a complete midfield performance, a constant driving force and scored two of Rangers seven goals against Motherwell on Sunday. Shame he's captaining Canada rather than playing for Scotland. Can't believe he wasn't capped while he was playing for Burnley in the English Premier League.

Keaghan Jacobs is perpetual motion in the Livingston midfield and was one big reason for a big result at home to Celtic on Sunday. He's had two spells and 10 years in the Livingston first team, having come through the club's youth development system, and he typifies what they're all about.

Gary Mackay Steven is a joy to watch when he's at the top of his game. Produced a moment of quality to win a drab match against Hibs at Pittodrie on Friday night. Must surely have a part to play for Scotland in the upcoming Nations League double header.

St Johnstone are Matty Kennedy's 10th club and he's just turned 24. The move to Perth is working well and he was a top performer when he was switched into a central striking role against Hamilton on Saturday. A clinical finish for the third goal and he smacked a 25 yarder against the crossbar.

Eros Grezda enjoyed scoring his first goal for Rangers so much that he headed in a second in Sunday's 7-1 home win against Motherwell. The Albanian attacker's move to Ibrox got off to a slow start because of injury but he now looks ready to make a serious impact.