The weekend's Scottish Premiership matches had more than a strong feel of significance to them.

At the top, Celtic hammered league leaders Hearts 5-0 as Brendan Rodgers' resurgent champions move to within one point of top spot.

Behind them, Rangers secured victory in Paisley to stay within four points of their rivals, while Aberdeen's triumph over Kilmarnock on Sunday was yet another sign Derek McInnes' men are on an upward curve.

As for Dundee and St Mirren, well, it was more of the same as they become further detached at the bottom of the table.

BBC Scotland's Rob Maclean looks at the top performers in his team of the week. Agree? Comment below. 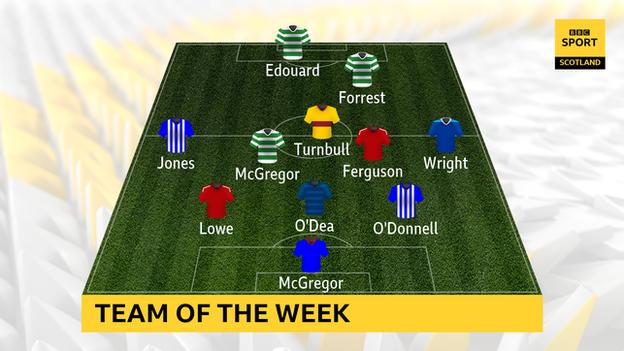 The Rangers keeper made important first-half saves in Paisley when St Mirren had their tails up. His stop from Ian McShane's deflected free kick, with the ball diverted towards the top corner, was a bit special, while his acrobatic finger-tip save was inspired. Make no mistake, McGregor laid the foundations for Rangers to get a vital win.

It's been an incredible year of progress for Kilmarnock and the same goes for their Scottish international right-back O'Donnell. We've now come to expect the level of performance he delivered against Aberdeen on Sunday. Mature and authoritative.

O'Dea played a central role in an improved defensive performance by Dundee. Yes, the Premiership strugglers lost again, this time at Motherwell, but there were signs of badly-needed progress. O'Dea hit the Motherwell bar with a header and, more to the point, used his experience to solidify the Dundee backline.

Derby County manager Frank Lampard needed a bit of persuading to allow his 21-year-old left-back to leave on loan. The Aberdeen fans are starting to understand his reluctance to let Lowe go to Pittodrie. A powerful and quick presence down the left and his talents were on show again at Rugby Park.

Former Colchester winger Wright has added an extra dimension to Saints' attacking play. But he's also willing to track back and take on defensive duties when required. Wright was the best player on the pitch as the Perth team made it four wins on the bounce by clinching a late victory at Easter Road.

I did say when teenager Ferguson left Hamilton after only 15 first-team appearances that he would make an immediate impact at Aberdeen. He's done just that. Ferguson is consistently one of the Dons' best players and on successive Sundays has scored the goals which took the team to the League Cup final then won them three crucial Premiership points.

Motherwell have a history of producing young talents who flourish in the first team, and Turnbull is already looking like the next to shine. The 19-year-old midfielder enjoyed scoring his first top team goal against St Mirren on Wednesday. So much so, he hammered home another one against Dundee three days later. It was the sweetest of strikes from 30 yards out.

McGregor has always been a neat footballer who can play in a variety of positions but he's currently revelling in a deeper midfield role with Scott Brown and Olivier Ntcham missing. The Scotland international moves the ball quickly, enjoys pulling the strings and his influence in the Celtic team is growing game-by-game.

Winger Jones was unlucky to end up on the losing side against Aberdeen. The Northern Ireland international never stops running with the ball and is a constant attacking threat for Killie.

Could Forrest be the answer to Scotland's striking shortage for the crucial upcoming Nations League double header? It's not the ideal solution but he's played the position before for Celtic and his goal against Hearts on Saturday was his ninth of the season.

With little room and minimal backlift, Edouard unleashed a stunning strike at Celtic Park on Saturday which clipped the underside of the crossbar on its way past Hearts keeper Zdenek Zlamal. A close-range finish gave the French youngster a double on the day, seven goals in seven games and 11 for the season so far.