Former Liverpool goalkeeper Brad Jones says there are "no major issues" after he was left unconscious for several minutes during a game on Friday.

The match was stopped for almost 10 minutes after the accidental collision with team-mate Bruno Uvini's knee.

Jones confirmed on Twitter that he suffered "concussion and some bruising."

Al Nassr's medical staff tended to a motionless Jones, who was stretchered off the pitch after he regained consciousness.

The Australian was taken to hospital in an ambulance but has since been discharged following the incident.

The injury could potentially sideline the goalkeeper for six weeks, meaning he will miss this month's Socceroos friendlies against Lebanon and Kuwait, which will be crucial preparation for the 2019 Asian Cup in UAE.

Jones joined Al-Nassr on a two-year deal in August, after spells at Middlesbrough, Liverpool and Feyenoord. 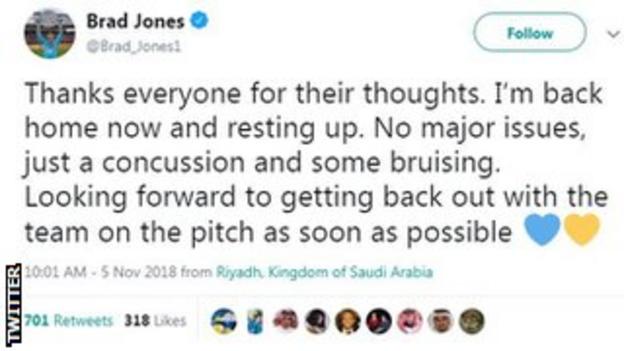