Manager Mauricio Pochettino believes Tottenham can qualify for the Champions League knockout stage after coming back from the brink of elimination during their win against PSV Eindhoven.

With 12 minutes remaining Spurs looked down and out before Harry Kane helped turn his side's fortunes around with two goals.

Their first win of the competition this season means the Premier League side sit third in Group B, three points behind second-placed Inter Milan, who come to Wembley next. Spurs then travel to Spain to face Barcelona in the Nou Camp.

"If we can beat Inter then we will both have seven points," said the Argentine. "Then in one game anything can happen. We will go to Barcelona [for the final group match] to try to win the game. The belief is still there. I am so optimistic."

They were then frustrated by a superb display from PSV keeper Jeroen Zoet, who kept them at bay with a mixture of brilliance and good fortune, utilising all parts of his body to make a succession of crucial saves.

And then, with time running out Kane, as so often before, came to their rescue, leaving their fate in their own hands but with tough tasks to come in their final two games.

The England striker brought the disgruntled home fans alive with a low shot that finally broke the defiant resistance of Zoet - then fashioned a victory that looked unlikely for such a long time when his close-range header was deflected past Zoet by substitute Trent Sainsbury with one minute left.

Kane the hero once again

Spurs may still be outsiders to make progress from Group B - they may need to win both their remaining fixtures - but it is thanks to their captain fantastic Kane that they are still in a position to navigate a route through to the knockout phase of the Champions League.

This was a tough, attritional night for Spurs, who were nowhere near their best and confronted by opponents in the Dutch champions who got exactly what they wanted with that early goal and set about protecting it as if their lives depended on it.

Pochettino's side were off colour and even the hugely popular manager felt the fury of the home gallery when his decision to substitute the dangerous Lucas Moura with Erik Lamela was greeted by loud jeering around Wembley.

It was approaching crisis time for Spurs as PSV held out but once again it was Kane who was their man of the moment, shrugging off what had been a sluggish personal performance up to that point to ensure he was the architect of what may yet prove to be a crucial win.

Kane was the predator in the box for the first and then produced the header that took that vital deflection off Sainsbury to end what had been a night of frustration in sheer elation. It also ended PSV's hopes of qualification.

A word of praise, too, for keeper Gazzaniga, given the vote over Michel Vorm in Lloris's absence. He produced crucial saves when needed and certainly played his part in keeping Spurs in the hunt for a place in the last 16 of the Champions League.

Spurs must improve to survive

Spurs and their fans greeted the final whistle with a mixture of elation and relief as they fashioned a turnaround that was starting to look increasingly unlikely to revive their fading Champions League aspirations.

Pochettino and his players know, however, that they simply must move their game on to another level if they are to get the results they need at home to Inter Milan and then that most daunting of tasks, away to Barcelona, to go through into the knockout stage.

It will be far from easy, but Spurs have matters in their own hands. If they beat Inter next time out by two goals - or a scoreline better than 2-1 - they will go into their trip to Spain knowing they need to match Inter's result at home to PSV to progress.

This was a victory that was a tribute to persistence rather than high quality in a Wembley atmosphere subdued by the struggles, for much of the time, of the home team and the swathes of empty red seats in a crowd of 46,588 that was down on the night's capacity of 51,000 and meant barely half the seating was used.

Wembley has been a somewhat eerie place for Spurs in their past two games, against Manchester City in the Premier League and for this game but their difficulties in the Champions League have been very much of their own making.

Late goals away to Inter and PSV cast aside winning positions that would have made their lives so much easier.

The good news for Pochettino and Spurs is that they are still in with a fighting chance but Wembley must be a cauldron against Inter and they simply to have to find other gears if they are to make the most of this late reprieve.

Wembley's playing surface - such a talking point for the home defeat by Manchester City - at least looked better. The pitch did not appear as cut up and the NFL markings, visible when they played City just a day after the Jacksonville Jaguars v Philadelphia Eagles clash, had been removed.

This was not, however, a game that flowed and the battle-hardened PSV coach Mark van Bommel demonstrated a colourful command of English to describe its condition in very straightforward terms.

Van Bommel said his players were complaining after training at Wembley, although the pain of this late defeat may have coloured his view.

Spurs will not be complaining - but they will hope it is soon back in peak condition, especially for the pivotal last home Champions League group game against Inter Milan. 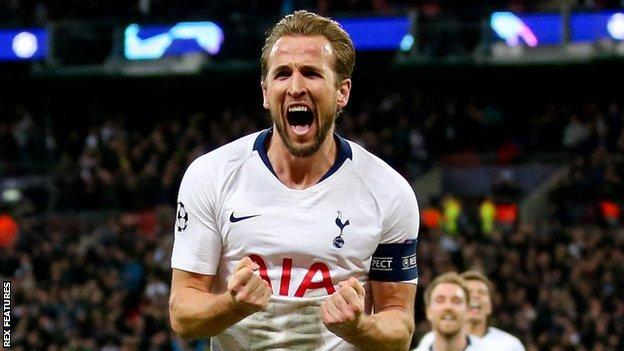 Tottenham manager Mauricio Pochettino: "The team deserved the victory. We won and suffered a lot. It was a massive effort so I was pleased. We played a lot in eight days. Now we need to try to recover for Saturday [at Crystal Palace].

"The team is growing up. We have the character of never giving up, which is so important."

PSV Eindhoven manager Mark van Bommel: "We fought like lions. After one minute we got a goal and we tried to defend it until the end.

"It's a very difficult group. We played four games and three times we've been leading. Our fans were behind us for the entire match; they were the only ones I could hear singing. We got a standing ovation from them at the end, which I think says it all."

Tottenham are back in Premier League action on Saturday as they face Crystal Palace at Selhurst Park (17:30 GMT).