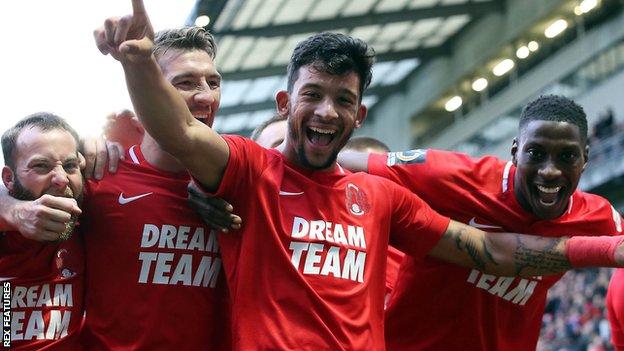 You can catch up with all of the National League news from October here. Meanwhile, check out the gossip page for the latest rumours and see our list of the latest manager ins and outs.

Midfielder Astley Mulholland has been released from his Barrow contract by mutual consent. The 30-year-old made three league appearances for the club this season.

Maidstone United have signed Ebbsfleet United winger Sean Shields on an initial one-month loan deal, with the view to a permanent transfer.

Dagenham & Redbridge have signed Ebbsfleet centre-back Kenny Clark, 30, on a deal until June 2021. Clark began his career with the Daggers before leaving the club in 2006.

Meanwhile, Ebbsfleet have added ex-Gillingham striker Cody McDonald, 32, to their squad. McDonald was a free agent after leaving AFC Wimbledon at the end of last season.

Aldershot have brought in striker Reece Grant from Braintree Town. Grant scored 17 goals in all competitions for the club.

Sutton United have signed striker Darren McQueen from Ebbsfleet United on a permanent basis. The 23-year-old joins for an undisclosed fee. Sutton have also signed Brandon Thomas-Asante from MK Dons on a two-month loan deal.

Meanwhile, Dover Athletic have extended striker Bobby-Joe Taylor's loan from Bromley until the end of the season. The 23-year-old has made four appearances since moving to the Crabble in October.

Chesterfield have signed forward Jordan Hallam, 20, on a one-month loan deal from Championship side Sheffield United, while Bradley Barry has been recalled from his loan with Dover Athletic.

Harrogate Town have signed long-serving Hartlepool United midfielder Michael Woods. The 28-year-old leaves Pools after four years - he made 160 appearances and scored 18 goals for the club.

Maidstone United defender Seth Twumasi has left the club to join National League rival Maidenhead United. The 28-year-old made 14 appearances for the Stones this season.

Striker Craig Dundas has returned to Sutton United for a third spell. Dundas, 37, who played for United from 2007-09 and 2010-18, rejoins the club from National League South side Hampton & Richmond.

Forward Joe Leesley, 24, has agreed a two-year contract extension with Harrogate Town, extending his stay with the club until 2022.

Accrington Stanley winger Erico Sousa, 23, has had his loan with Barrow extended by a further month. The Bluebirds have also signed former Swansea City midfielder Kemy Agustien, 32, on a short-term deal until January.

Defender Tyrone Williams has signed a new contract with Solihull Moors, keeping the 24-year-old with the National League side until the end of the 2019-20 season.

Doncaster Rovers winger Alex Kiwomya, 22, has had his loan spell with Chesterfield extended until 12 December.

Forward Mohamed Bettamer, 25, has joined Barnet from fellow National League club Braintree Town on a deal until the end of the season.

Hartlepool United have signed forward Tyrone O'Neill, 19, on loan from Middlesbrough until the end of December. He could make his debut against Gillingham in the FA Cup first round.

Midfielder Jonathan Smith has joined Chesterfield on an 18-month deal after having his Stevenage contract terminated by mutual consent. The 32-year-old had been on loan with the Spireites.

Stoke City have loaned defender James Butler to Hartlepool United on a deal which will expire in mid-January. The 18-year-old centre-half came to the attention of Pools while on-loan to FA Cup opponents Kidsgrove.

Braintree Town have re-appointed Hakan Hayrettin as manager following a successful spell in caretaker charge. The 48-year-old was sacked in his first spell following Braintree's relegation from the National League in 2017 - read more.

AFC Fylde midfielder Joe Cardle, 31, has left the club by mutual consent. The Scot made 17 appearances after joining the Coasters in the summer.

Eastleigh have appointed Ben Strevens as their new manager. Strevens, 38, had been in caretaker charge following Andy Hessenthaler's move to Dover - read more.

National League side Dagenham & Redbridge have signed striker Conor Wilkinson on loan from League One club Gillingham until January.

The 6ft 3in, 23-year-old Republic of Ireland youth international began his career as a trainee at Millwall and has gone on to feature for clubs including Bolton, Oldham and Barnsley.