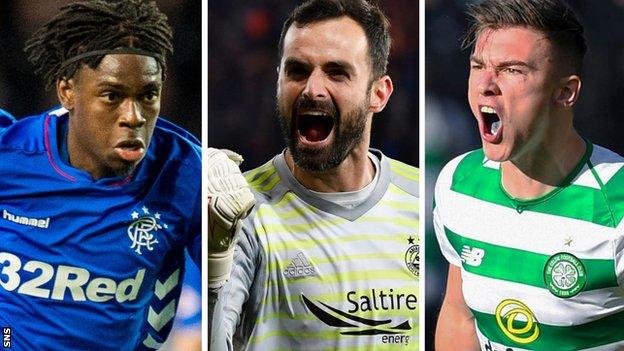 Which Scottish Premiership team picks the tallest players? Which side gives young talent the most minutes? And which clubs rely most heavily on foreign recruits?

The Football Observatory, a research group within Switzerland's International Centre for Sports Studies, has produced a detailed set of data that provides the answers.

The study covers 31 top-flight European leagues this term, so we can see how the Premiership stacks up against the rest of the continent.

Armed with towering figures such as 6ft 5in goalkeeper Joe Lewis and defender Andrew Considine - who is an inch shorter - Aberdeen have fielded the tallest players on average this season. Being a taller team might have its advantages - four of the current top six Premiership sides are also in the top six for height.

At the other end of the vertical scale, the bottom two clubs in the table, Dundee and St Mirren, are also the shortest overall. The Buddies' average height this term is just 178.14cm (5ft 10in) - the fourth-shortest among all of the European teams studied.

The average height of all Premiership players this season stands at 181.35cm (5ft 11in)- almost three-and-a-half centimetres shorter than the Danish Superliga, which has the tallest average player height.

Of the leagues examined, the Scottish top-flight sits among the small fry in 25th.

On average, Kilmarnock have selected the oldest players in the division this season. Even with veteran striker Kris Boyd spending more time on the bench than the pitch, Steve Clarke has routinely used 34-year-olds Kirk Broadfoot and Chris Burke, as well as Gary Dicker, Jamie MacDonald and Scott Boyd, all of whom are 32.

A lack of experience might be hurting struggling Dundee, who have fielded the youngest players on average. Captain Glen Kamara and vice-captain Cammy Kerr are both just 23, while Celtic loanee Calvin Miller and summer signing Benjamin Kallman are only 20.

The Football Observatory defines a "club-trained" player as a footballer who has "been in the employer club for at least three seasons between the ages of 15 and 21".

Hibernian top the chart as the team who has given the greatest percentage of its playing minutes to club-trained players.

Hearts gave plenty of game time to young prospects such as Harry Cochrane and Anthony MacDonald last term. But, given the arrival of 16 new recruits this summer, it is perhaps unsurprising Craig Levein's league leaders have given the lowest percentage of playing minutes to club-trained players.

Again, Scotland's top flight is pretty much in the middle, with Slovenia's PrvaLiga offering the biggest average chunk of match minutes to club-trained players and the Cypriot First Division the smallest.

Any footballer playing outside "the association where he grew up" is defined by the Football Observatory as an "expatriate".

This season, Motherwell have given the greatest percentage of game time to expatriates. Only four of the starting XI that lost to St Johnstone last month, for example, are Scots.

Newly-promoted Livingston have given just 10.07% of their match minutes to expatriates this season. Only seven of their 25-strong first-team squad are from somewhere other than Scotland.