Liverpool manager Jurgen Klopp said he is "winning average games" for the first time in his life after Mohamed Salah sealed a narrow victory at Huddersfield that keeps them level on points with Premier League leaders Manchester City.

Salah's 50th goal in English football came courtesy of a smart low finish, as he put away Xherdan Shaqiri's 24th-minute through ball to dampen a mood matching Huddersfield's bright start.

Egypt forward Salah was visibly buoyed, having failed to score in his previous four appearances, but Huddersfield reacted positively as they twice went close to equalising before half-time.

Captain Jonathan Hogg smashed a long-range drive against the post before Alex Pritchard was marginally offside when lifting a finish past Alisson, while a penalty appeal for handball against James Milner was turned down.

After the break, Laurent Depoitre saw a header well held with Huddersfield's only attempt on target, while Salah fired wide when presented with a tough chance to finish at speed on the counter-attack.

There was a league debut for the Reds' £39m former Monaco midfielder Fabinho but, even with his introduction, Liverpool failed to totally assume control of a game that Huddersfield substitute Steve Mounie almost snatched away from them.

With eight minutes to play, the Benin striker rashly blazed over from inside the box after a cross spilled through unconvincing blocks from Virgil van Dijk and Dejan Lovren.

"It is the first period in my life that we can win average matches," Klopp said. "I prefer the spectacular way, but I would take that today completely.

"When you come back from the international break there are many things no-one asks about, like the time difference.

"That is why I was a bit more animated on the touchline today because if you are tired, you at least need to be afraid of your manager."

Victory lifted Liverpool into second in the table. They trail Pep Guardiola's side on goal difference, with the defending champions 10 goals better off after a 5-0 win over Burnley earlier on Saturday.

Huddersfield, who last season defied the odds to avoid relegation, remain without a victory this term and are now two points from safety in 19th.

One touch is enough - just

This was not a vintage performance from a Liverpool side who many recognise as the most likely challengers to City, but, having drawn away to Chelsea and at home to the defending champions in their previous two league games, getting three points was what mattered most.

Without regulars Sadio Mane and Naby Keita - both were injured over the international break - at times the link-up play between midfield an attack was flat, and there were plenty of errors in possession.

In fact, Liverpool made the most failed passes they have all season - 111 - a statistic which also helps reflect Huddersfield's combative display. 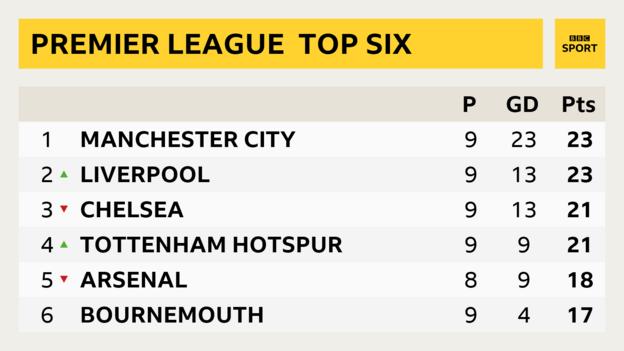 David Wagner's side often forced errors, but they were lacking in quality when chances presented themselves. The same was not true of the Reds in the one moment that ultimately mattered.

Salah's goal, tucked home first-time from Shaqiri's clever pass, decided the contest, as this Liverpool team became the first in the club's history to concede as few as three goals in the opening nine matches of a league campaign.

The dry run goes on

Huddersfield are now without victory in 13 league games, having drawn five and lost eight since a 1-0 victory at home to Watford on 14 April.

In failing to score once more, they equalled a top-flight record by going five consecutive home fixtures from the beginning of a season without a goal.

Might things have turned out differently? Had Hogg's blistering strike found net instead of post, they may well have grown further and capitalised against a side that looked vulnerable despite their lead.

In the end, Depoitre's 55th-minute header was comfortably saved by Alisson. Mounie appeared to lose his head when presented with a golden chance to equalise late on.

Only Huddersfield and bottom club Newcastle have failed to win since August's opening day, and neither can rely on the poor form of those around them any longer.

Huddersfield boss David Wagner: "This handball situation was a huge situation and I don't understand why it wasn't a penalty. I haven't spoken to the referee.

"It was a clear handball and the ball changed direction because of this handball and Laurent Depoitre couldn't receive the ball. It is handball. That could easily decide the direction of the match.

"But apart from this we limited them and they're a top class team. We were with them and we can take this forward with us."

Liverpool manager Jurgen Klopp: "The basis we have created so far is brilliant - 23 points. I don't think I've had that after nine games. And there is still space for improvement, which is good as well, so let's get home and work on improving.

"Huddersfield did well. They defended well and were very aggressive around the second balls. After this game, everybody knows how good they are and how good they will be in the future."

Liverpool next play in the Champions League, at home to Serbian champions Red Star Belgrade on Wednesday. Next Saturday they play at home to Cardiff in the Premier League.

Huddersfield travel to Watford in the Premier League next Saturday.