A clip of Paul Pogba and Jose Mourinho having a training ground exchange - described as "frosty footage" on social media by one broadcaster - had two million views in just one hour on Wednesday.

The level of scrutiny and interest in the two men's interactions has spiked again after another bleak few days at Manchester United.

There was an unexpected home draw with Wolves, more criticism of the manager's tactics and an EFL Cup exit on home soil to Championship club Derby.

In the last two months alone, media storms have erupted over the club's transfer policy, manager Mourinho's treatment of striker Anthony Martial and now, what appears to be, his broken relationship with £89m record signing Pogba.

Mourinho says there is "no problem".

Is that true? And where do United go from here?

Can we believe Jose when he says there has been no fall-out?

If it is true there has been no fall-out, it would suggest Pogba does not care, which would be a terrible situation for United to find themselves in.

Pogba returned to United in August 2016 in a blaze of publicity, with an expensively-produced video featuring rapper Stormzy, the social media hashtag Pogback and a vow to complete the journey he appeared to be on towards success at Old Trafford before Sir Alex Ferguson fell out with his agent Mino Raiola and he left for nothing to join Juventus in 2012.

His performances have been erratic, his best period coming at the start of last season before his campaign was interrupted in September by injury.

However, hopes Pogba's role in France's World Cup triumph last summer would be the springboard to the player fulfilling his immense promise on a more regular basis have been dashed.

Instead, the relationship between Mourinho and his most expensive player has unravelled to the extent he might end up being sold in the January transfer window.

Mourinho's response to Pogba's success in Russia was lukewarm.

He started by saying it was important Pogba understood why he had done so well, a comment taken by many as a sign Mourinho wanted to claim some of the credit.

However, the United boss later clarified: "The World Cup is the perfect habitat for a player like him to give (their) best. It's closed for a month. He can only think about football."

The implication was clear. Pogba was too easily distracted and spent too much time on non-football activities.

The problem with that is United - through their vast and expanding commercial arm - champion their social media reach in particular as evidence of their status and value and are not afraid to use it in negotiations with potential signings.

Not surprisingly, Pogba was unimpressed.

On 6 August, three days before the English transfer window closed, Raiola tried to engineer a move out of Old Trafford amid interest from Barcelona.

Even for a man as adept at doing deals as Raiola, it was impossible. United would not even contemplate a transfer and wondered instead if it was a ploy to engineer a wage rise, something that was strenuously denied.

Yet the issue did not go away.

Speaking after United had beaten Leicester in their opening Premier League game, when he had been named captain in Antonio Valencia's absence, Pogba said 'If you are not happy, you cannot give your best', adding that if he said any more he would be fined.

Mourinho dismissed the comments. But when Pogba inflamed the situation a second time at the weekend, when he responded to a 1-1 draw with Wolves by stating United needed to stick with their traditions to "attack, attack, attack", his manager decided the situation had to be addressed.

Pogba - and his team-mates - were told on Tuesday his status as 'second captain' to Valencia was being removed. 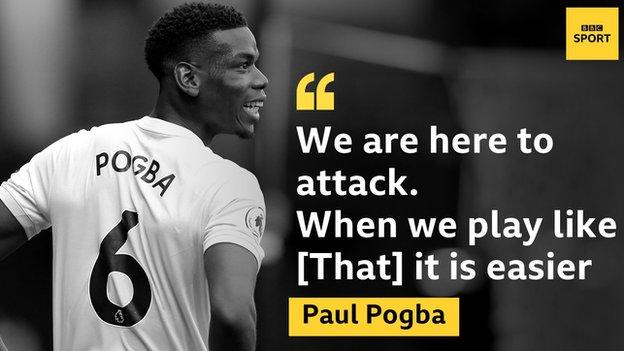 What happens with Pogba now?

In the short term, there is no decision to make and stability needs to be restored. Pogba cannot leave until January no matter how unhappy he is. Manchester United cannot do without their best midfield player no matter how irritated some senior club figures are with his behaviour.

It has to be asked if Pogba is doing his bit to diffuse the situation.

At Old Trafford on Tuesday he sat with non-playing team-mates in an executive section of the Sir Alex Ferguson Stand wearing a top so dazzlingly white it was possible to pick him out in the crowd from the other side of the ground. That is not the work of a man trying to avoid attention.

It would seem, therefore, any attempt to get Pogba to tone his behaviour down is doomed to failure.

That means the onus is on Pogba to live up to his own hype and deliver the performances United fans expected when he returned from Juventus in the first place.

If he does that, when it gets to January, executive vice-chairman Ed Woodward will be facing a very tricky choice.

It is fair to assume the Barcelona interest will remain. Pogba is understood to be keen on the move and competition regulations now allow players to appear for more than one team in a single Champions League season.

So, does Woodward say yes to the Catalan cash? Or does he stick to his previous stance and say no and hope to persuade Pogba to stay?

If he takes the latter option, the question mark would then hang over Mourinho.

Ed lays out his masterplan

Every three months or so, Woodward has to do a conference call for the investors that have helped propel United's share price skywards to $23.40 (£17.80) at the start of trading on Wednesday.

Usually, his words revolve around commercial operations at Old Trafford, or what plans are in place to squeeze even more out of what Woodward calls "the biggest sports team in the world".

On Tuesday, Woodward said he wanted to "take a step back". He then said the United "board, investors and everyone at the club are aligned with the fans on what we need to do on the pitch. That is to win trophies. That's one of the reasons we hired Jose".

That is not all though. In a prepared statement released an hour earlier, Woodward said this: "We are committed to our philosophy of blending top academy graduates with world-class players."

It couldn't be any clearer. Jose Mourinho has been appointed not just to win, but to do it the 'United way'.

This was why Mourinho's demand to bring in an experienced defender with a dodgy injury record and little resale value in Jerome Boateng was blocked in the summer.

It is also why United continue to have faith in 22-year-old Anthony Martial rather than offload him in favour of Inter Milan's 29-year-old Croatian Ivan Perisic as Mourinho would prefer.

And, given the job description, the bottom line from defeat by Championship side Derby is that United now have no chance of winning one of the four competitions available to them this season, having already fallen eight points behind leaders Liverpool in a Premier League campaign that is just six games old.

So, what is the future for Jose?

Mourinho signed a contract extension in January that runs to 2020.

At the moment, the date seems a very long way off.

Undermined over transfers, repeatedly critical of his players, concerned about the 'bad' season he predicted in the summer, when he warned of the consequences of not getting the squad he wanted, and without his right-hand man Rui Faria, who quit at the end of last season for personal reasons, Mourinho seems a more distant and isolated figure than at any stage of his United tenure.

Away supporters cruelly taunt 'You're getting sacked in the morning' when games turn against him, very rarely these days do we see the smile and mischievous humour that so characterised his first arrival in England 14 years ago.

The big question is, does Mourinho have the desire to fight the battles - internal and external - that need to be won if he is to re-establish both himself and his club at the top of the English game. And could Woodward really get rid of a third manager following the dismissals of David Moyes and Louis van Gaal.

United routinely play matches with players signed by four different managers, including Sir Alex Ferguson. United have never employed a technical director, so the players are remnants of previous philosophies.

It is one argument as to why they seem to lack cohesion on and off the pitch, whereas at Manchester City, Liverpool and Tottenham in particular, squads have been pieced together with an overall plan in mind.

History suggests that whilst Woodward's aim was laudable, the technical director model was the route to go down post Ferguson, and almost certainly will be when Mourinho eventually leaves.

The unknown for United fans right now is whether that exit will be in 2020, 2019 or even earlier, as unlikely as that may seem.