Every week the BBC Football Daily Euro Leagues podcast panel will select a promising youngster to focus on. This week our subject is...

He was billed as the "next Lionel Messi" by his boyhood club's owner when still a schoolboy, broke records in his debut season in Serie A and has since earned a big-money move to Monaco.

Pietro Pellegri, 17, is one of Europe's brightest young talents.

The Italian striker came through the ranks at Genoa and made his debut in December 2016, becoming the joint-youngest player in Serie A history at 15 years and 280 days.

He scored his first goal for Genoa the following May in his first start for the club - away at a sold-out Stadio Olimpico against Roma in Francesco Totti's farewell game - and in doing so became the first Serie A goalscorer born in 2001.

In September 2017, he netted a double against Lazio, making him the youngest player to score twice in an Italian top-flight match, and his father Marco, the club's assistant manager, cried in the dugout.

Manchester United, Inter Milan and AC Milan were all linked with Pellegri, but he joined French club Monaco in January 2018 for a reported £17.1m - the second-largest fee for a 16-year-old in history.

The teenager was hampered by injury for the remainder of the 2017-18 season, but scored his first Monaco goal in a 2-1 defeat by Bordeaux in August.

Earlier this month, he was called up to the Italy squad for the first time but did not feature in their matches against Poland and Portugal because of a minor injury. 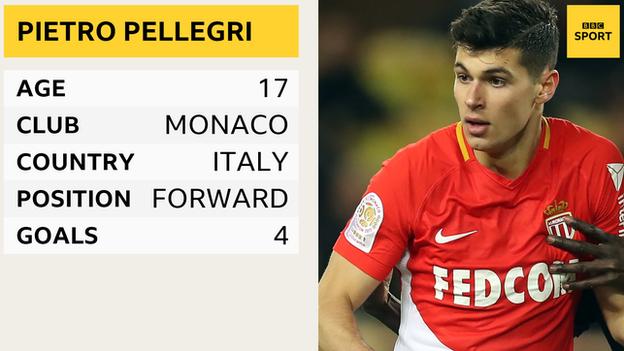 French football journalist Julien Laurens said: "Pellegri moved to France from Genoa where he was born and had come through the academy for 25m euros, which at the time raised a few eyebrows in France, where he was not known.

"He is an incredible talent. The guy is so young but so mature. He is a tall player but is very good with the ball at feet.

"His idol is Zlatan Ibrahimovic and I think you can see that. He has got an amazing future ahead of him."