Celtic had to settle for a draw after Olivier Ntcham's first-half red card blotted an unconvincing display against a vibrant St Mirren in Paisley.

Celtic saw Dedryck Boyata's header cleared off the line, with the Belgian looping another late effort over.

Substitute Leigh Griffiths and Callum McGregor also wasted second-half chances in a lethargic display by Brendan Rodgers' side, who moved to within two points of early pace-setters Hearts.

But defeat would have been harsh on St Mirren, who were instantly galvanised under new manager Kearney after conceding 12 goals in their last four games under Alan Stubbs.

During the week the new St Mirren manager brought in a magician-cum-motivator called Rod Hogg to entertain his players and lighten the mood around them.

Hogg said he did a few tricks and conducted a bit of hypnosis. Not half. Compared to the error-ridden, soft touches of before, this was a stunning transformation.

In the first minute, Ryan Edwards clattered into Kieran Tierney. He got a booking, but he set an agenda. St Mirren, with five changes from their 4-1 loss to Hearts, worked like demons. They were organised and energetic, they were committed and dangerous. There was a clarity about them all night. Celtic were troubled from early on.

Ntcham committed two fouls before he finally got booked, then committed another, then another, a ridiculous lunge on Stephen McGinn seven minutes before the end of the half that brought a deserved red card.

By then Kearney's team had created five reasonable chances. Craig Gordon punched clear from Smith's free-kick, Flynn headed over, Gordon saved again from Smith, Jack Baird fired wide and Hodson had his low drive tipped away by the Celtic goalkeeper.

The visitors had one chance, a Boyata header from a corner that was cleared off the line by Flynn.

The hosts had a numerical advantage and they warranted a goals advantage, too. They did not just contain Celtic in that opening half. They were better than them.

Griffiths joined Odsonne Edouard up front for much of the rest of the game. Instead of playing to win, St Mirren were pushed back and played not to lose. This was bodies behind the ball and bodies on the line.

Celtic just were not good enough to break St Mirren's new-found resolve. Callum McGregor had a big chance with six minutes left but his shot could not beat Craig Samson, while Griffiths did find the net in injury-time, but was flagged offside. 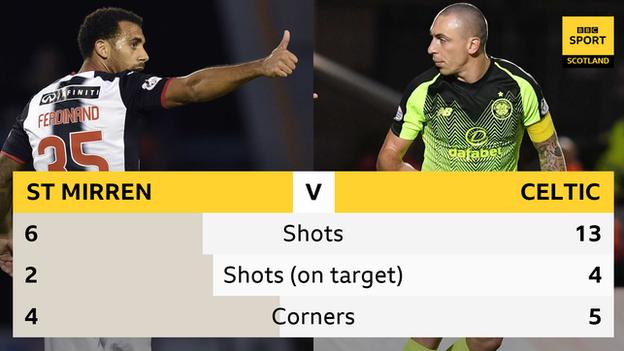 'To a man, St Mirren were absolutely superb' - Analysis

You can't under-estimate just how brilliant a performance that was from St Mirren - physically, emotionally, tactically. They thoroughly deserved a point, even if I felt psychologically they settled for it early in the second half, when they might have been a bit braver. But to a man, they were absolutely superb.

Celtic's first-half performance was abject. They huffed and puffed in the second half, but never really threatened to break St Mirren down. It looked like Celtic had turned a corner with their Old Firm victory, but the international break came at a bad time for them.