West Ham "should be very worried" by their poor start to the season, says manager Manuel Pellegrini.

The Chilean's side lost 1-0 at home to Wolves, leaving them without a point after four games and bottom of the Premier League table.

In 2010-11, the only other time West Ham lost their opening four games, they went on to be relegated.

"I don't think it is a bad start, it is a very bad start," Pellegrini told BBC's Match of the Day.

"We can't lose six points here at home like we have. Playing away against Liverpool and Arsenal, if you don't play so well is understandable. Here at home to lose we must be very worried."

"On the training ground we are doing well, no lack of attitude," added Pellegrini, a Premier League winner at his first attempt with Manchester City in 2013-14.

"We have to take that work during the week to a game where there is that added pressure. It is just four games, we won't stop fighting now. We are just starting and will resolve that problem."

West Ham captain Marko Arnautovic also warned that his side are in trouble despite the early stage of the season.

"This is unacceptable. I know what we have in the squad. We have quality but we need to show it. We will try to get our heads right and come back together in the international break," said the Austrian.

"The club and fans expect a lot more from us. We need to stick together and believe in each other and get confidence to turn things around. But we need to do this ASAP otherwise there is going to be big trouble." 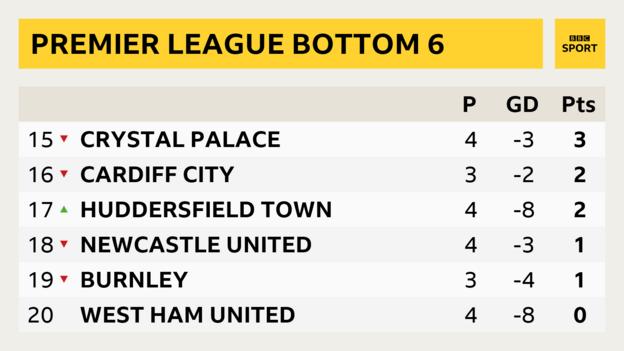 Saturday's result means West Ham have lost their first four league games in a season for only the second time in their history and first since 2010-11 when they were relegated.

In addition, Pellegrini is the first West Ham manager to lose his first four Premier League games in charge since Avram Grant, who won just seven games during the 2010-11 season.

However, the last three sides to lose their first four games in the Premier League have all stayed up.

Crystal Palace and Bournemouth were pointless at the same stage last season and finished in 11th and 12th place respectively. Southampton also survived after the same scenario in 2013-14.

Of the 10 sides to fail to win a point in their opening four games in the Premier League, four have been relegated at the end of that season - Swindon in 1994, Sunderland in 2006, Portsmouth in 2010 and West Ham a year later.