Alex McLeish suffered his fourth defeat in five games in charge as Scotland were thrashed 4-0 by ruthless Belgium.

The Scots competed in the first half, albeit they trailed at the break after John McGinn was robbed at the edge of his own box and Romelu Lukaku scored.

But they collapsed after the interval. Eden Hazard lashed in before Michy Batshuayi added two more - both after the Scots gave away the ball.

It was Scotland's biggest home defeat since England won 5-0 in February 1973.

McLeish's side begin their Nations League campaign on Monday, with early group leaders Albania visiting Hampden after they beat Israel 1-0.

A victory in Hungary is the only success of McLeish's second stint in charge, with the Scots failing to score in defeats by Costa Rica, Peru, Mexico, and now Belgium.

Belgium took a little while to catch Scotland with the first of the howitzer blows, but when the first one landed there was a certainty of more. Many more.

The Belgians, with Hazard lording it over all others, are good enough to unpick most defences, but when those defences have a death wish, as Scotland had, then a rout is guaranteed. As sure as a greyhound courses a hare, McLeish's team were chased around a sparsely attended Hampden in front of 20,196 spectators.

If you were a Belgian, it was pretty and what you would have expected from your boys. If you were a Scot it was painful, an evisceration of McLeish's notion that his team were good enough to go "toe-to-toe" with the third best team in the world. Delusional.

Just before the half-hour, Belgium got their first. Craig Gordon unwisely rolled the ball out to McGinn, who was facing his own goal and unaware of the danger he was in. His first touch was a total calamity and allowed Mousa Dembele to ransack him and feed Thorgan Hazard, who calmly rolled it across for Lukaku to score his 41st international goal.

The torture was only just beginning. Gordon took out Timothy Castagne and yet, by some miracle, Italian referee Luca Banti did not give a penalty. Then Gordon turned an Eden Hazard header on to a post.

A minute into the second half, Hazard blasted the second goal right over Gordon's head and into his net. Soon after, Charlie Mulgrew's aimless ball out of defence fell to Dembele, who gave it to Hazard. The attacker slipped in Batshuayi in for the third.

More soft touch stuff cost Scotland a fourth when Ryan Jack was robbed by Youri Tielemans and the Monaco man teed up by Batshuayi to blast a shot low past Gordon.

At 4-0, Belgium relaxed and the Scots carved out a few chances. They did not give up. That is about as much as you can say for them. 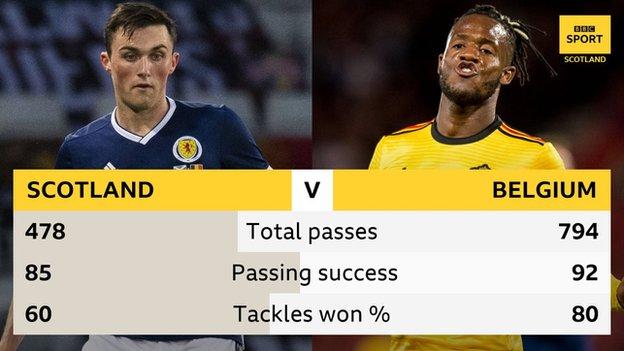 'McLeish has psychological job to do' - analysis

That Scotland got annihilated by the Belgians is not a surprise. They are not the first side to suffer at the hands of Roberto Martinez's team and they will not be the last.

There is a very legitimate question to ask about why the Scottish Football Association offered up the national team as lambs to the slaughter against such a lethal team just a few days before their opening Nations League fixture, but the damage has been done. It is too late to bemoan that. What is relevant now is the impact all of this might have on the confidence of the team before the arrival of Albania.

The Albanians have a world ranking of 58, but even a side of fairly modest talents would surely have taken advantage of the kind of crass mistakes that Scotland made on Friday.

McLeish could have done without this match against a formidable opponent. It has done nothing but damage. The Scotland manager does not just have a tactical game plan to put together before Monday. After such a chastening experience, he has a psychological job to do, too.

The game in numbers