For the first time in more than a decade, two Scottish clubs will take part in the group stage of a European competition this season.

The last time it happened was when Rangers and Celtic were both in the Champions League in 2007/08. This time, the Old Firm will be in the Europa League together after taking significantly different routes to get there.

The draw takes place in Monaco on Friday at 12:00 BST. The Glasgow clubs cannot play each other, but who else might they face? How much money will they make? And when are the games?

Who else is in the group-stage draw?

The likes of La Liga sides Sevilla and Villarreal, Premier League pair Arsenal and Chelsea, Italy's Lazio and Bayer Leverkusen of Germany could all come to Glasgow as top seeds.

Celtic will dodge their fellow Pot 2 sides such as Marseille and AC Milan, but Rangers could welcome those teams, or the likes of Sporting or Fenerbahce.

Spain's Real Betis, Germany's RB Leipzig and Spartak Moscow of Russia are all dangerous propositions for both Scottish sides from Pot 3.

And from Rangers' Pot 4, Brendan Rodgers' side could face a rematch with Rosenborg, who they beat in the Champions League qualifiers.

How much do they stand to make?

Both Scottish clubs will claim an immediate £2.6m for reaching the group stages, from a total Europa League prize pot of £455m.

Each group win is rewarded with £320,000, with a further £105,000 on offer for each draw. Add in gate receipts, television money, and a share of the coefficent ranking pot will add to their bounty.

When are the matches?

Games will kick off at either 17:55 or 20:00 BST/GMT on Thursday evenings, which means that subsequent Premiership games will be moved to Sundays. 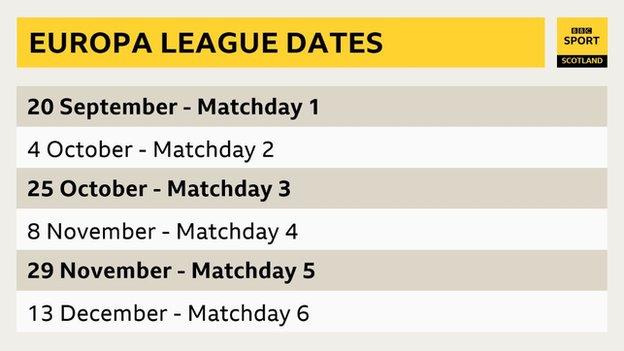 Rangers are one of just four teams from the 94 who entered first-round qualifying to reach the group stages, along with Sarpsborg of Norway, Cyprus' Apollon Limassol and Copenhagen of Denmark.

Manager Steven Gerrard said he "always had one eye on this moment". He added "It was the first thing we could achieve as a group and the players deserve all the credit."

And while Celtic were hoping for a Champions League campaign, manager Brendan Rodgers was keen to accentuate the positives.

"This is a competition of great prestige with historical clubs like Arsenal, AC Milan and Lazio," he told BBC Scotland.

"It's a great reward and I'm very much looking forward to the games. It's maybe not the glamour competition but we need the support and it was great to see nearly every seat full tonight."