A decision on whether Scotland will play their home matches at Hampden or Murrayfield from 2020 has been delayed.

The seven-strong Scottish FA board met for several hours on Wednesday but were unable to come to a conclusion.

Proposals were submitted in July by Queen's Park - the League Two club who own Glasgow's Hampden - and by Scottish Rugby, who want to host games in Edinburgh once the lease expires.

Both parties have been asked to provide more information within the next week.

It is now unlikely there will be a decision until after Scotland host Albania in their opening Uefa Nations League match on 10 September.

Scottish FA chief executive Ian Maxwell said the outcome "will have a significant bearing" on Scottish football and that the additional information will "allow a final decision to be made".

The board had final tours of Hampden and Murrayfield on Tuesday, having spent several days poring over thick dossiers on each bid.

The Scottish FA has an option to renew their lease on Hampden - the national team's home since 1906 - but it commissioned a feasibility study to assess all the options.

After rejecting a proposal in January from Celtic and Rangers to share hosting of internationals and domestic cup matches, the choice boiled down to remaining at Hampden or moving to Murrayfield.

Queen's Park agreed in principle in March to sell Hampden to the Scottish FA - a development thought to make it more likely the governing body would keep hosting games there.

But various hurdles - including the cost of such a deal - do not make it a foregone conclusion.

'The clock is ticking' - analysis

The delay comes as no real surprise, because the noises coming from Hampden leading up to the meeting suggested a straight outcome was unlikely.

Onlookers may wonder why, after months of looking at both options, they can't press the button on one and move forward. Simply, the SFA knows this is a decision it cannot afford to get wrong.

The can can't be kicked down the road very far though. For logistical reasons, the clock is ticking. The delay does suggest there is no runaway favourite - that either provides hope or jangles the nerves, depending on which side of the debate you fall.

Another seven days and we will finally get clarity, maybe. 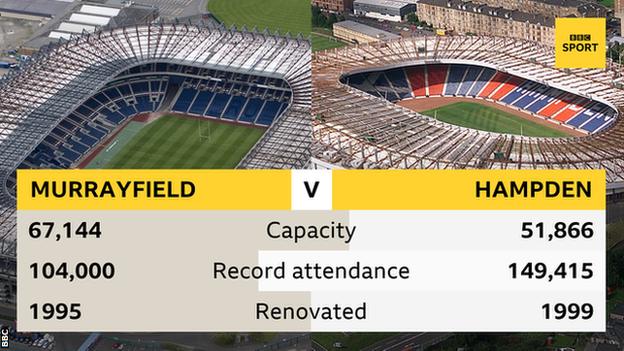