The perception is that Steven Gerrard has helped Rangers move closer to Celtic. That the Ibrox club have a good chance of winning the first Old Firm game of the season. That a title challenge will follow.

But is any of that true?

Rangers are undefeated in Gerrard's opening 11 games. Celtic have lost twice in that time and been knocked out of the Champions League. Both will be hopeful of reaching the Europa League group stages this week. Is one thriving and the other foundering?

Before the sides meet at Celtic Park on Sunday, BBC Scotland has looked at their domestic records, European exploits and recruitment. Then you can vote to decide if the gap has narrowed or not.

Little to split them domestically

On the face of it, Celtic's ratio of points per game has declined in the three seasons in which Brendan Rodgers has been in charge. But it's not as simple as that.

Their average was always going to drop from the 2.78 points per game harvested in the 'Invincibles' season. This season - which is only three games old - it sits at exactly two points per game.

Rangers, despite the general feeling of positivity and progress, are actually down on each of the past two seasons at 1.66 points. Again, the caveat is that there have only been three matches and two of those have been at Pittodrie and Fir Park.

Dig a little deeper into the data and Celtic and Rangers are broadly similar defensively in terms of goals conceded and shots faced, but one area they differ is in attack.

While Rodgers' side have taken significantly more shots at goal in their matches against Livingston, Hearts and Hamilton Academical, the sides have hit the target the same number of times. 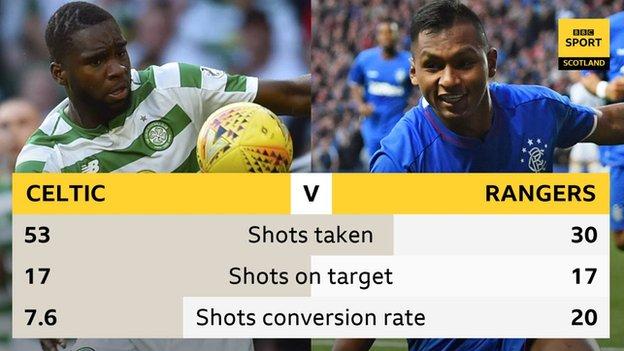 Has Europe skewed the perspective?

While the two sides have fared equitably at home, it is perhaps their fortunes in Europe that have shaped the narrative around them.

Celtic have failed to reach the Champions League for the first time under Rodgers, their familiar flaws in defence to the fore as they were knocked out by AEK Athens in the third qualifying round.

A similarly shaky display against Suduva in their Europa League play-off round first-leg draw in Lithuania last week has contributed to the feeling of unease.

Gerrard's Rangers, meanwhile, have only won one game more but are yet to be defeated in continental competition and have kept three clean sheets away from home.

And has transfer activity played a part?

Celtic's on-field stumbles have been exacerbated by the almost constant noise swirling around the club's movements in the market - or lack thereof.

Rodgers has been vocal about his frustrations after missing out on Hibernian midfielder John McGinn during a summer in which the only signings have been Odsonne Edouard, Scott Bain, Emilio Izaguirre and Daniel Arzani - two of whom were on loan at the club last season.

To add to that, midfielder Stuart Armstrong was allowed to leave for Southampton and has not been replaced.

Rangers, conversely, have recruited 12 players since Gerrard took charge and revitalised a squad that finished in third place in the Premiership last term and was knocked out of the Europa League in the first qualifying round by Luxembourg minnows Progres Niederkorn.