Harry Kane finally ended his August scoring hoodoo as Tottenham moved top of the table but big-spending West Ham are nestled at the bottom.

Everton's £50m signing of Richarlison raised more than a few eyebrows in the summer.

The Brazilian moved from Watford, where he failed to score in his last 26 Premier League games.

However, Richarlison has hit the ground running with the Toffees as he followed up his double against Wolves last weekend with a goal in Saturday's 2-1 win against Southampton.

We have, to a certain extent, been here before - Richarlison scored five goals in his first 12 games for the Hornets in his debut Premier League season before his form hit a sudden and sharp decline.

But the bigger picture is that Richarlison is already a key part of an Everton side that appears to be rediscovering its identity.

Against Southampton, they pressed high and attacked with intent - a far cry from the sometimes ponderous football played last season.

Early days but there are encouraging signs of something positive developing at Goodison Park. 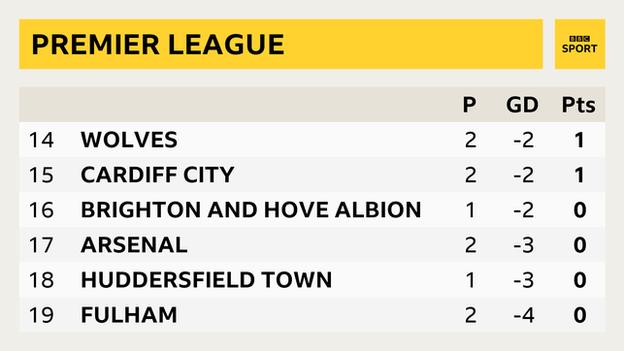 It's been a tricky start to life in the Premier League for the three promoted teams.

Fulham signed 12 players and spent more than £100m to assemble a squad they hope can keep them in the top flight but, two games in, they are yet to pick up a single point following defeats by Crystal Palace and Tottenham.

Wolves, like Fulham, spent big to make sure they avoid an immediate return to the Championship but are also yet to record their first win of the campaign, following up their 2-2 draw with Everton with defeat at Leicester on Saturday.

Cardiff, the bookmakers' favourites to finish bottom, were the only side of the three to pick up anything this weekend - drawing 0-0 with Newcastle - but even then needed a 96th-minute penalty save by Neil Etheridge from Kenedy.

It is, of course, far too early to push the panic button. Neither Newcastle nor Brighton managed to pick up any points from their first two games on their return to the Premier League last season but stayed up comfortably in the end.

Speaking of spending big, West Ham are showing that it doesn't always guarantee success. At least, not immediately.

The Hammers, like Fulham, spent in excess of £100m during the summer in an effort to ensure they are not looking over their shoulders quite as much as they were last season.

However, Saturday's 2-1 defeat at Bournemouth leaves them pointless after their opening two games. They have now conceded six and scored just one goal after losing 4-0 to Liverpool last weekend.

They say money isn't everything and that would certainly appear to ring true if you glance at the Premier League table. Propping up the standings is West Ham, while joint top is Tottenham, who did not spend a penny in the summer.

You'd be forgiven for thinking that James Maddison and Ryan Sessegnon were seasoned Premier League pros, not top-flight newbies.

Maddison, who joined Leicester City from Championship side Norwich in the summer, scored his first Premier League goal in just his second game at this level as the Foxes beat Wolves 2-0 on Saturday.

Meanwhile, 18-year-old Sessegnon grabbed an assist as Aleksandar Mitrovic scored Fulham's first goal on their return to the Premier League.

Up and down day for World Cup stars

There was mixed fortunes for a trio of England's World Cup players.

Kieran Trippier was one of the Three Lions' standout players in Russia thanks to his driving runs down the flank and dangerous set-pieces. He picked up right from where he left off as he made his first Premier League start of the season against Fulham.

The full-back was a constant thorn in the Cottagers' side and grabbed Spurs' crucial second in the 3-1 win, slamming home a free-kick that further enhanced his credentials as 'the Bury Beckham'.

Meanwhile, Trippier's team-mate Harry Kane finally ended his August hoodoo, scoring his first goal in the month after failing to find the back of the net in his 14 previous games.

But it was a day to forget on a personal level for Jamie Vardy as the Leicester striker was sent off against Wolves. The Foxes still managed to win 2-0 in his absence.