The Bluebirds secured their first point of the season after Kenedy's injury-time spot kick was saved by goalkeeper Neil Etheridge - his second penalty save in as many games.

The Brazilian was lucky not to be sent off in the first half for kicking out at Cardiff's Victor Camarasa.

"It would have been devastating to lose at that stage," said Warnock.

"My dad used to say 'what goes around comes around' so I think that was poetic justice, the penalty miss."

Chelsea loanee Kenedy, who joined the Magpies on loan last season before re-signing in the summer, escaped being sent off after 33 minutes after referee Craig Pawson missed his wild swipe at Camarasa's legs.

"Kenedy was a lucky lad [when he kicked out]," added Warnock.

"I never even saw that Kenedy should have been sent off in the first half, like the referee I looked away and missed it. The fourth official saw it to give a foul but it was one of those things.

'I am confident I can score goals' 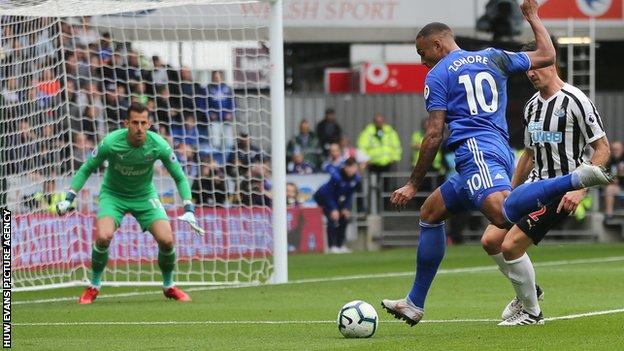 Warnock is hopeful the Bluebirds can start to look like more of a goal threat now that striker Kenneth Zohore has returned to fitness.

Despite an improved performance against Newcastle, Cardiff are yet to force an opposing goalkeeper to make a save this season after also drawing a blank at Bournemouth.

"I'm quite pleased with the whole afternoon apart from not scoring," he said.

"The last third we could have done better with the ball and create better chances and our free kicks were poor today, so things to work on there.

"Ken hasn't trained for two and a half weeks and he's such a big lad he's got to train. He's looked a lot sharper. I thought he did well.

"They knew they were in a game, the centre-backs. I was really pleased with him. So the only thing is we've got to get him a bit fitter so he can last 90 minutes."

Zohore, who missed the target with two good headed chances, says he is confident he can score goals for Cardiff in the top flight.

"We are going to learn as this season goes on. I am sure we will get some wins here at home as the home support is amazing, I love playing here in front of our crowd, it is the best," he said.

"We need to create some more chances, of course, but I am confident I can score goals, I am sure they will come.

"The chances come so fast (in the Premier League), it has been a long time since I have played in a league game, but I thought I did well today."