Manager Gareth Southgate saw "a glimpse of the future" as England celebrated Wayne Rooney's final international appearance with a comfortable friendly win over the United States at Wembley.

Southgate gave debuts to three players and they all impressed, with Bournemouth forward Callum Wilson's goal capping an industrious performance up front.

Brighton defender Lewis Dunk and Southampton goalkeeper Alex McCarthy, a second-half substitute, were barely tested but both were solid on their first appearances, while Borussia Dortmund's Jadon Sancho played the full game as he won his second cap.

Rooney, winning his 120th cap in a fund-raiser for his charitable foundation, made a 33-minute appearance on a night England showed their appreciation for their 33-year-old record goalscorer.

But it was the players at the start of their international careers who stole the show, as Southgate fielded England's most inexperienced starting XI in nearly 40 years.

The team that began the game had only 94 caps between them coming into the match - the last time England fielded a more inexperienced side was in May 1980 against Australia.

"We wanted to use this game to look at young players," he told BBC Radio 5 live. "We had a glimpse of the future, and were able to get Wayne on to show some wonderful touches.

"We had a really inexperienced team out there, so they've come through and learned a lot, and we've paid our respects to one of our greatest ever players.

"Some of our attacking play in the first half-hour in particular was really exciting."

The young side were 2-0 up by the time Rooney was finally introduced - Jesse Lingard opening the scoring with a spectacular curling effort, and Trent Alexander-Arnold adding a low, angled drive for his first international goal.

If it was a memorable night for Rooney, who was denied a dream goal by Brad Guzan's stoppage-time save, it was the same for the hard-working Wilson when he produced a near-post finish 13 minutes from time.

It set England up nicely for Sunday's Uefa Nations League game with Croatia at Wembley, which takes on great importance after the World Cup finalists' 3-2 victory over Spain in Zagreb.

If England win they will finish top of Group A4 and qualify for next June's semi-final and final. If they lose, they will be relegated.

For all the mixed opinions evoked by the Football Association's decision to give Rooney a sentimental final run-out for his 120th cap, there appeared no doubt in the minds of the Wembley crowd that this was a worthwhile exercise.

When the former England captain appeared before kick-off with his four children through a guard of honour formed by both teams to receive a presentation from FA chairman Greg Clarke and Harry Kane, it was the start of a genuine show of affection.

And Rooney beamed in appreciation as he warmed up near the touchline when Liverpool youngster Alexander-Arnold - another Merseysider - drilled in his first England goal.

The DC United striker was given a standing ovation when the big moment arrived, and he came on for Lingard for that final 33-minute appearance.

Rooney, who has excelled in Major League Soccer, looked trim and fit as the crowd cheered his every move, willing him to produce one more special England moment.

He almost delivered the dream finale in stoppage time when only the outstretched right arm of Guzan stopped him adding a 54th goal to his all-time England record. And, agonisingly, he was just unable to stretch enough to meet a cross six yards out seconds later.

Rooney took the acclaim of the crowd at the final whistle as the curtain came down on his England career.

Good night for Southgate and England

England's night may have been partly ceremonial as Wembley paid that final tribute to Rooney, but it was also a night of serious business for Southgate.

He and his players needed to build on the momentum delivered by the superb win against Spain in Seville, which was one of the factors leading to the criticism this was effectively turned into a Rooney testimonial.

Southgate can certainly be satisfied with plenty of what he saw, albeit against a United States side that looked very poor, despite Christian Pulisic forcing a fine save from Jordan Pickford at 0-0.

England, though much-changed, played with pace and there was certainly plenty to be encouraged by from the new-look side.

Southgate is now likely to select his strongest available side for what is a winner-takes-all final Nations League fixture here against Croatia on Sunday.

Croatia inflicted a second successive defeat on Spain while England were winning here so the equation is clear cut - and the World Cup finalists have demonstrated once more what a dangerous side they can be.

"We knew tonight would be tough for Spain," Southgate said.

"Croatia have shown again their resilience, it sets Sunday up to be a very special tie. I'm sure whoever devised the Nations League is sitting smugly somewhere in Switzerland.

"We know not to underestimate Croatia, they have a huge lift tonight and the great thing is it sets up a brilliant game at the end of what has been a really exciting year." 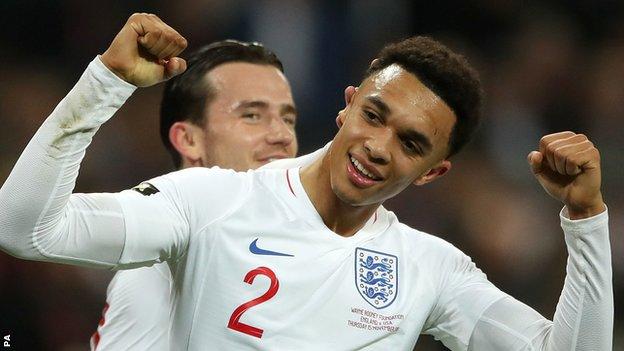 England manager Gareth Southgate said: "The players will have taken on board Wayne Rooney's humility, even after everything he has given to the game. He mucked in during training and worked hard in the five-a-sides and in the game he was tracking back.

"We've got really good competition for places and it was a good test for them. We've got a brilliant game to come now, this is what the Nations League is all about."

England debutant and goalscorer Callum Wilson: "There was a chance just before the goal when Trent Alexander-Arnold slid the ball in and I thought the chance might have gone because I saw Marcus Rashford on the side of the pitch warming up.

"But there was one last opportunity and I managed to get my foot around it, which is one of the hardest finishes, so I'm delighted it went in."

Man-of-the-match Trent Alexander-Arnold: "A dream come true, first game at Wembley and for my country. It was exciting and we want to show what we are made of.

"It's been exciting, looking back on Wayne Rooney's career, he was one of the best players for the country and it was good to share the pitch with him. As a Liverpool lad, it is good to show people in Liverpool that it is possible."

Wilson's Cherry on the cake - the stats