A full-blooded and evenly contested first half contained chances at both ends, and Kenedy was lucky not to be sent off for kicking Victor Camarasa off the ball.

Backed by a raucous home crowd, Cardiff dominated after the break and should have led when Kenneth Zohore headed wide, before Newcastle substitute Isaac Hayden was dismissed for scything down Josh Murphy from behind.

Zohore had another chance to score with a close-range header that was cleared off the line by Jacob Murphy, but Rafael Benitez' side reorganised efficiently and were awarded a penalty deep into added time when Bluebirds captain Sean Morrison handled a cross from Yoshinori Muto.

However, for a second match in succession, Etheridge saved a spot-kick to prompt jubilant celebrations among Cardiff fans who minutes earlier had seemed disappointed by the prospect of a goalless draw.

It was a memorable moment for the home side, albeit one which perhaps masked their attacking deficiencies as they failed to score and managed just one shot on target for a second game in a row. 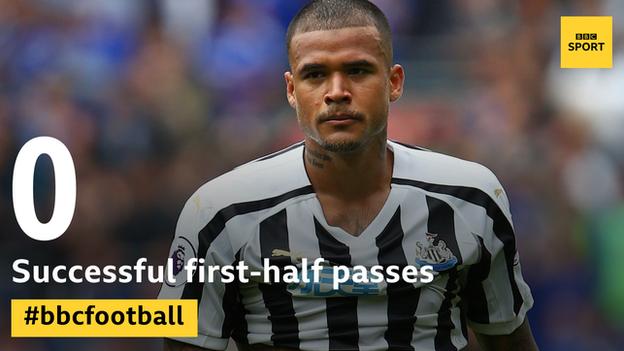 Newcastle's loss to Tottenham on the opening weekend was set against a backdrop of discontent among the Magpies' supporters, who protested against Mike Ashley's ownership before kick-off after another acrimonious summer during which the club had to defend their transfer strategy.

That ill feeling was offset slightly by the team's competitive display against Spurs, though they struggled to play at the same level in south Wales.

Benitez's men created a handful of chances - with Etheridge making some decent saves - but they were fortunate not to be reduced to 10 men before half-time.

After losing possession, midfielder Kenedy lunged towards Cardiff's Camarasa and, after the ball had gone, he took a wild swipe at the Spaniard's legs - which referee Craig Pawson somehow missed.

It capped a first half the Brazilian is likely to want to forget - as he became the first player since 2010 to play 45 minutes or more in a Premier League match without completing a single pass.

Keeping Kenedy on the pitch was a reprieve for Newcastle, but they had no such fortune when Hayden - filling in at right-back after replacing the injured Javier Manquillo at half-time - caught Murphy above his ankle with a reckless lunge from behind.

Hayden may have trudged off the field fearing he would be cast as the villain of the piece, but Kenedy's final act of the game - a tame penalty comfortably saved by Etheridge to deny Newcastle an improbable win - meant that role would be his.

"Kenedy struggled today, he didn't complete a pass in the first half" said former England defender Alex Scott on Final Score. " Sometimes as a player when things are not going your way you think 'I'll step up and score to get me on my way', but that didn't happen for him today.

Cardiff had endured a chastening re-introduction to the Premier League when they were outplayed for much of their 2-0 defeat at Bournemouth on the opening weekend.

Their brief moments of encouragement on that occasion came from set-pieces - and it was a similar tale here, with Sol Bamba close to scoring with a header which was blocked by Ayoze Perez.

While their threat from corners and free-kicks remained, Cardiff were vastly better in open play on Saturday.

Debutants Harry Arter and Camarasa gave them control and a greater share of possession in midfield, while winger Josh Murphy - twin of Newcastle's Jacob - was a handful on his first start for the club.

And although the new signings were integral to Cardiff's improvement, it was one of the players who helped them win promotion from the Championship who proved to be their saviour.

Etheridge had marked his top-flight debut with a penalty save from Callum Wilson last weekend, and while that did not affect the outcome, his stop from Kenedy was a match-defining intervention.

Having become the first Filipino to play in the Premier League against the Cherries, it was also another bit of history for the goalkeeper - denying Kenedy made him the first keeper to save a penalty in each of his first two appearances in the division.

Man of the match - Josh Murphy

Newcastle manager Rafael Benitez on Match of the Day: "It was a difficult game against a physical team, and we played a lot with 10 players.

"We had Javier Manquillo who was injured and then Hayden came in and got sent off - so we had too many problems. In the end to get a point, it could be better, but we cannot complain too much."

On Kenedy's miss: "It was a poor penalty, he's not happy he missed a good chance. We win as a team and lose as a team. I am not concerned about the fact he missed a penalty - he has to take responsibility."

Cardiff boss Neil Warnock on Match of the Day: "I don't think the lads deserved to lose with a penalty like that.

"Kenedy was a lucky lad [when he kicked out]. There is stuff to work on for us - we were disappointing with our free-kicks.

"No disrespect, but having watched Birmingham last night, thank goodness we came out to a full house to play Newcastle in the Premier League."