Chris Gunter is confident of overcoming an injury for Wales' Nations League games against the Republic of Ireland and Denmark on 6 and 9 September.

The 29-year-old defender injured a hamstring during Reading's 4-0 friendly defeat by Crystal Palace on Saturday.

Reading manager Paul Clement initially said the full-back would "be out three to six weeks", which could have ruled him out of Wales duty.

But Gunter suggested his injury is not serious, tweeting "I'll be just fine".

After playing the Republic, who ended Wales' World Cup qualification hopes by winning 1-0 in Cardiff the last time the two sides met, on 6 September at Cardiff City Stadium, Wales travel to Aarhus to face Denmark.

Gunter, who has 88 caps, has not missed an international game for eight years and his confidence that he will continue his impressive run in a Wales shirt will be a boost for manager Ryan Giggs.

The Wales boss does still have a concern over midfielder Aaron Ramsey, who was withdrawn from Arsenal's friendly against Chelsea on Wednesday after an issue with his calf during the warm-up. 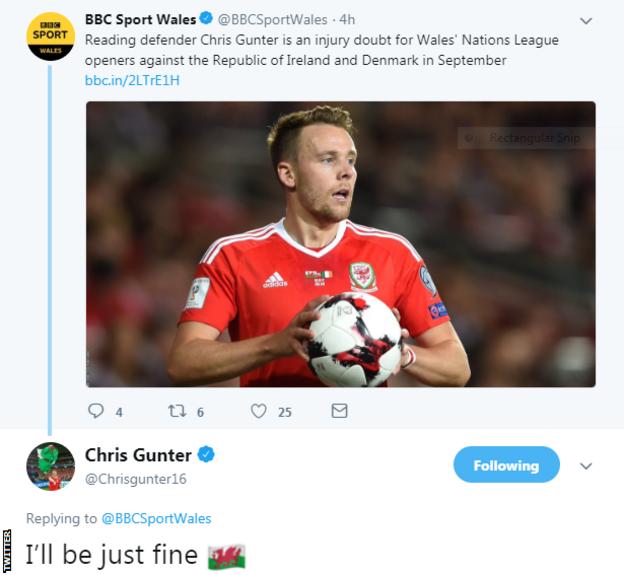 The Gunners are waiting on medical reports to see the extent of the problem, but boss Unai Emery does not think it is too serious.

"He has one little muscular pain and we decided not to start him in the match because it's maybe a big risk for him," said Emery.

"I'm waiting for the medical analysis and I don't think it will be a big problem."

Fellow midfielder Billy Boden, who made his Wales debut in the China Cup last March, is definitely out after the Preston North End player suffered a knee ligament injury in training this week that is expected to sideline him for up to six months.