Celtic should take an "aggressive" approach against AEK Athens in Glasgow next week to enhance their Champions League ambitions, says Brendan Rodgers.

Rodgers' men moved to within two rounds of the group stage after following up their 3-1 home win over Rosenborg with a goalless draw in Norway on Wednesday.

Celtic host AEK next Wednesday and travel to Greece the following week.

"I always say if you've got your first leg at home, you can bring a score that can get you through," Rodgers said.

The Celtic boss told BBC Scotland he was "unsure" how great a challenge AEK will present his players.

He says he will now study the Greek champions but that "they are 11 human beings, like us".

He added: "After this game there are another two rounds to go, but if that's what it takes to get through, then that's what we will do."

'To keep a clean sheet was very pleasing'

Rodgers admits Celtic lacked accuracy in their passing in Trondheim, but he was pleased by the strength of his inexperienced central-defensive pairing.

Scotland international Jack Hendry, 23, was paired with 20-year-old Norwegian Kristoffer Ajer and, despite a few shaky moments, Celtic's goal was not unduly troubled.

"Young centre-halves, you've got to defend and win headers," Rodgers said. "To come away and keep a clean sheet was very pleasing.

"We've shown the maturity of the players and how they're developing. I said to them afterwards, I'm very proud.

"Okay, we'll play better football, we need to be cleaner with our passing and build-up play, but what you've got to show, especially in Europe, is a mentality to defend, and we did that exceptionally well." 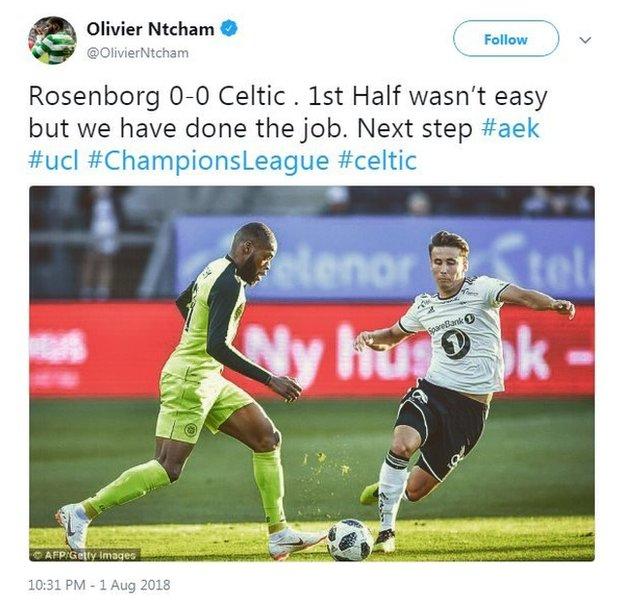 I want to see Celtic coming to these places and controlling the game. In that first half, they just didn't.

They'll have to improve against these higher-level teams, like AEK. They will create things around the edge of the box, they will be quick and sharp in bursts, and Celtic will have to defend better against that.

Rodgers will still be disappointed, but they were comfortable. I can't really think of too many chances that Rosenborg had. I think they just ran out of ideas.

The job was done in the first leg. They will just have to be more aware against AEK, sharpen up defensively and make sure they are more compact. The first leg is at Celtic Park and if they perform as they did against Rosenborg, they will be in good shape. 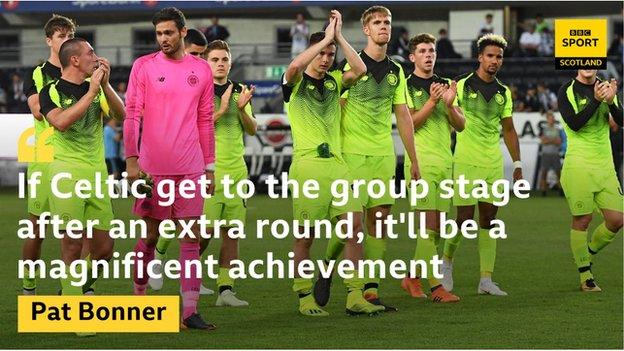