John McGinn's low 44th-minute drive put the visitors ahead, and Asteras lost Michalis Manias to a second yellow card early in the second half.

But Kosmas Tsilianidis levelled, and Adam Bogdan had to make several vital saves to keep Hibs ahead on aggregate.

Neil Lennon's men host Molde in the first leg of their tie next Thursday, before making the trip to Norway the following week.

Trailing 3-2 from last week's opening game, Asteras know they had to score. The hosts had much of the early possession, but spearheaded by captain David Gray, Hibs' rearguard repelled all that was thrown at them.

At the other end, Martin Boyle failed to capitalise on a lovely floated ball from Vykintas Slivka, his effort deflected high and wide.

With half-time looming, there came a pivotal - and breathless - two minutes.

Tsilianidis crashed a header off the crossbar from just six yards as Asteras sought the goal that would nudge them ahead.

The Greek fans probably should have been celebrating, but instead watched in horror as their team fell behind.

Captain Matias Iglesias was pick-pocketed inside his own half by Florian Kamberi, who slid in McGinn on the left to rasp the ball into the opposite corner.

Things got worse for Asteras three minutes into the second period.

Manias broke through on goal, but his shot was well blocked by Bogdan, and as the forward hared after the rebound, he lunged recklessly into Paul Hanlon, earning himself a second yellow card. 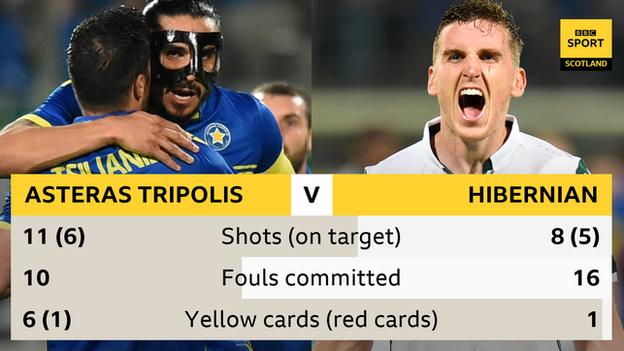 At that stage, Hibernian were firmly in command of the tie, two goals and a man up. McGinn and colleague Steven Mallan were gaining control of the midfield. And seldom did Lennon's backline look troubled.

But infuriatingly for the Hibs boss, his players made seeing the match out a fraught and at times desperate undertaking.

It started when Hanlon and Lewis Stevenson let an innocuous ball to roll into the feet of Tsilianidis. Efe Ambrose committed himself and was easily spun, allowing the Greek to saunter into the box and slot past Bogdan unchallenged.

The on-loan Liverpool goalkeeper was maligned for the manner of Asteras' goals a week ago, but emerged as the Hibernian totem in a nail-biting final quarter.

And best of all, the Hungarian sensationally flicked away a goalbound header from the teenage Greek forward.

In among all this, there were fleeting chances for Kamberi and Boyle on the break. McGinn was a magnificent bundle of brawn and brain, surging his team out of trouble over and over.

Ultimately, another engrossing Hibs battle ended with success for Lennon and his team.