Aberdeen's Europa League qualifier with Burnley was a "mismatch off the pitch" but "very, very close" on it, according to former Celtic striker Chris Sutton.

Sam Vokes' 80th-minute effort gave the English Premier League side a precious away goal at Pittodrie.

But the Scottish Premiership runners-up led for much of the contest after Gary Mackay-Steven's 19th-minute penalty.

"Nobody really gave Aberdeen a chance but this was a good advert for British football," Sutton said.

Speaking on BBC Radio 5 live, he added: "Pittodrie was full to the rafters. England v Scotland, the Battle of Britain; what a great advert for the game.

"We talk about the budgets, the markets that both teams work in and there are some knockers down south of the Scottish league but Aberdeen did Scotland proud."

That sparked debate over the health of the Scottish game, with Aberdeen boss Derek McInnes and Motherwell manager Stephen Robinson among those to point to the financial disparity between Scotland and lower-league clubs in England.

That contrast was further illustrated by the fact that Aberdeen striker Sam Cosgrove - who was up against England international James Tarkowski - cost just £20,000 from Carlisle.

However, Sutton - who spent six years with Celtic until 2006 - refuses to entertain reports from England of the Scottish game's demise.

He said: "You've got Hearts on the up, Hibs on the up. Steven Gerrard has gone into Rangers, you've got Brendan Rodgers at Celtic... the game is on the rise, attendances are on the rise. They're smiling, they're enjoying Scottish football. It's not all about money.

"I don't like the flak that flies both ways, from Scotland to England and vice versa. They're both good leagues in their own right. They both have things going for them.

"Why can't we just admit that, respect each other's leagues and get on with things?"

'Burnley just seemed to get bigger and bigger' 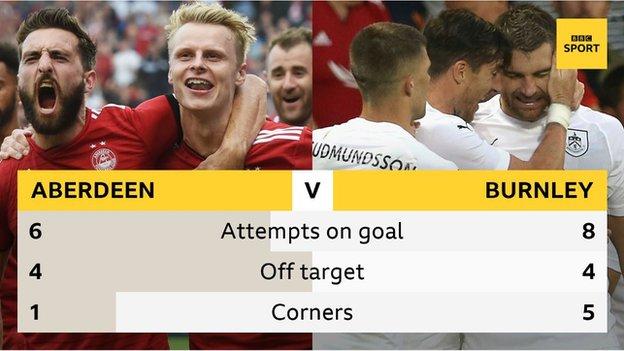 In front of a raucous capacity crowd of 20,313, Aberdeen continued a trend of draws in European games between clubs from England and Scotland.

Six of the past nine cross-border contests have not had a winner, with Celtic holding Manchester City home and away in the Champions League group stages in 2016-17, Hearts drawing on their travels against Tottenham and Liverpool in the Europa League in 2011 and 2012 respectively, and Rangers earning a Champions League point against Manchester United at Old Trafford in 2010.

McInnes thought Aberdeen could have won the game, having led for so long, but was content that his side remain in the tie.

"I'm not frustrated because Burnley were excellent in terms of asking the question in the second half," he told BBC Radio Scotland. "It's half-time in a cup tie and we're still in it.

"We probably put too much into the second half and it came back to bite us a bit, but when they bring players off the bench and they seem to get bigger and bigger, it's tough.

"I know where we are in the game and we are proud of what we are. We are in a league that doesn't allow us to compete fairly with teams like Burnley but we've shown we've got good players here."

The second leg will be next Thursday, with the winners playing Turkish side Istanbul Basaksehir in the third qualifying round.

Burnley boss Sean Dyche insisted the "game is not over", but he was content with a draw given how his side started the game.

"We deserved to edge it but I'm not taking anything away from an Aberdeen side that certainly made it a proper game," he told BBC Scotland.

"The atmosphere was great, fans of both sides were excellent and it felt like a real, real game."