On Thursday, Maxwell apologised for the "abhorrent" abuse suffered by young people under its care. But he said Scottish football was "a safe place".

Maxwell was responding to the findings of a review set up 18 months ago after allegations of decades of abuse.

He has since been in touch with some of the victims to clarify his comments.

Haynes waived his anonymity to the BBC in December 2016 to accuse a former youth coach and top-flight assistant referee of a catalogue of child sex offences over a three to four-year period from 1979.

In response to Maxwell's interview with BBC Scotland, Haynes tweeted: "Did you even read the report? Shame on you. 40 years of hurt to be told SFAs policies on child safety are a success. Go."

The report - commissioned by the Scottish FA in December 2016 - found child protection policies are "not fit for purpose" and must change to prevent future cases of abuse.

Maxwell - who was appointed in April - said the recommendations would be implemented where possible.

"I would like to apologise to the survivors and anyone who has been the victim of abuse in Scottish football," he said. "It is abhorrent in football and society that these things still occur.

"It is important that we take the right steps by commissioning this review to understand the best way to stop them happening in future."

The governing body's chief executive said "significant strides" had been taken to address issues in the past 18 months. 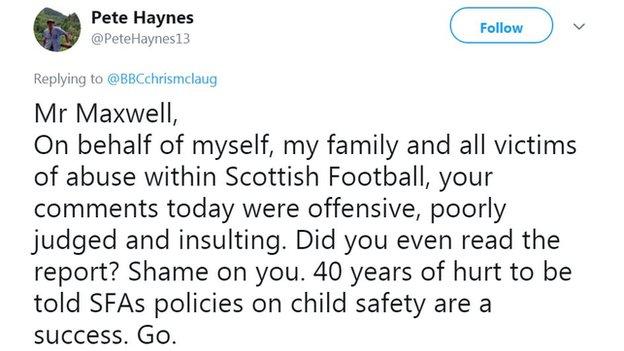 'Vast majority have yet to come forward'

He told BBC Scotland the "vast majority" of victims affected by historical abuse in Scottish football had not yet come forward.

The former children's charity executive said many victims had paid a high price by deciding not to participate in football while others had had careers in the game but hidden the past.

As of November 2017, a total of 298 criminal cases have been recorded with Police Scotland linked to sexual abuse in Scottish football.

Henry said: "A lot of the people who did come forward talked about their pals, about people that they knew who they believed had been affected by this issue but had never spoken or come forward about it."

The report cannot be published in full until legal proceedings, in some cases relating to the report, have been concluded.

Among its findings, it highlights:

In light of the interim findings, Haynes told BBC Scotland: "Rather than this being a burden, I feel now that I have a legacy.

"I think the Scottish Football Association, senior clubs and clubs down to grassroots level would do well to take heed of the recommendations in the review or ignore them at their peril."

Asked if his abuse could have been prevented if the recommendations had been in place when he was playing, Mr Haynes said: "Absolutely, absolutely.

"And if the SFA and the other clubs in Scotland do not act on these recommendations it will continue to happen to other people's children." 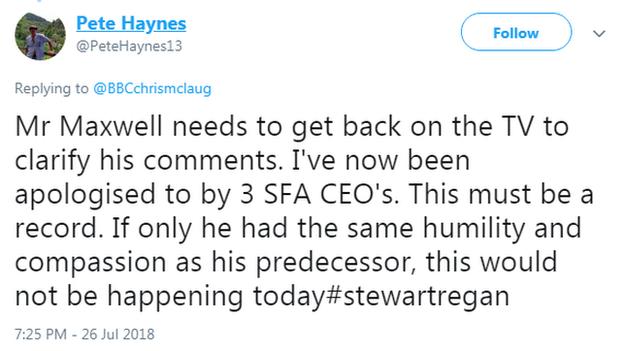