The Scottish champions play in Norway on Wednesday with a third qualifying round tie against AEK Athens the prize.

"It was a joy to watch," said Rodgers, who took the blame for the slow start.

"It's not always clean and pure and scoring five or six goals. You judge your team as well when they are down and they were absolutely fantastic in that.

"It was a real demonstration of maturity and staying calm under pressure, and at the end of the day could have had five or six goals."

Rodgers conceded that a change of shape hindered the Scottish champions in the opening quarter of the match, but was delighted with how his players reacted.

The sides drew 0-0 at Celtic Park a year ago in the third qualifying round - with Celtic going on to win 1-0 in Trondheim - and Rodgers considers that to be progress.

"I sit in a much better place, in how we played and with a two-goal advantage, than we did at this stage last year," he said.

"We feel we can go out there, defend and then score goals. It is half-time and we know it will be tough over there but it's a good one for us." 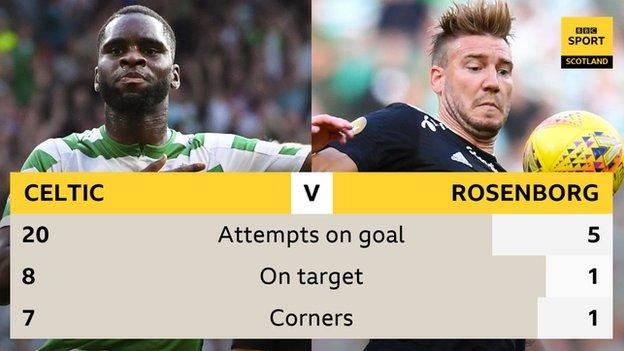 'Edouard is a class player'

Edouard's double took his tally for the season to three in three Champions League appearances.

The 20-year-old, who completed a permanent club record move from Paris St-Germain in June, was Celtic's sole striking option in the absence of the injured Moussa Dembele and Leigh Griffiths.

And Rodgers was full of praise for the Frenchman, describing him as "a class player".

"The first goal looks so simple, but you watch again and you see his movement just to create the space and then pass it in," added Rodgers. "The second, he times his run perfectly.

"The mark of top strikers is to have that confidence on the big occasion and for him to show that under pressure was brilliant."

'Celtic can score in Norway' - reaction

I think Celtic have got more than enough to go and score as well [in the return leg]. Rosenborg have to come out and score and that will work in Celtic's advantage. Hopefully they can cut them open and make it a comfortable night.

Rosenborg did not do a single thing in an attacking sense after Rodgers changed things. Celtic caused their own problems early on. They were unlucky though as they deserved more than 3-1 tonight.