The 38-year-old joins on a free transfer after being released by Huddersfield, where he did not make a first-team appearance last season.

Green has played over 650 games for Norwich, West Ham, QPR and Leeds and has 12 England caps.

Chelsea say he will provide back-up to Thibaut Courtois and Willy Caballero at Stamford Bridge.

"It has been a whirlwind 24 hours," Green told Chelsea's official website.

"You are thinking about your career and where you want to go and then you get a phone call like this - and it is a short conversation.

"It has been a pretty dramatic time for me and it is a thrill and an honour to be here." 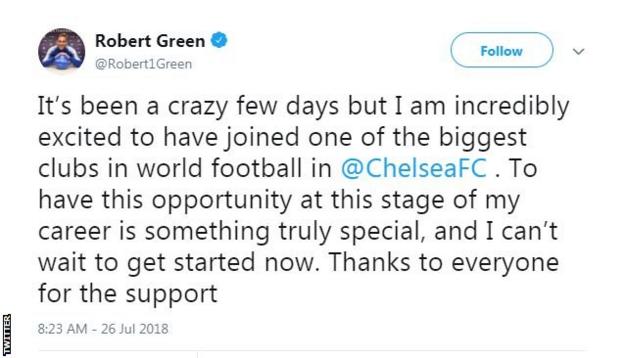 Green did not play for Huddersfield last season and featured once for Leeds United in a 5-1 victory over Newport County in the Carabao Cup in August.

However, he did play every minute of the previous season's Championship campaign with the Elland Road side.