England striker Harry Kane is in a commanding position to finish the 2018 World Cup as top scorer, with only the final left to be played.

Kane, 24, ended the tournament with six goals after failing to score as the Three Lions lost 2-0 to Belgium in Saturday's third-place play-off.

France strikers Antoine Griezmann and Kylian Mbappe have both scored three times so far in Russia.

Croatia, their opponents in Sunday's final, have three players on two goals. 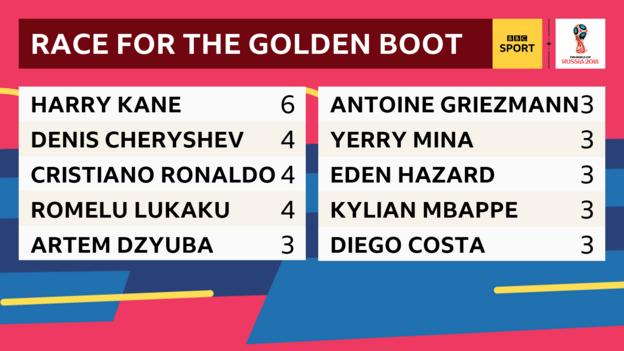 Kane, Premier League top scorer in two of the past three seasons, equalled Gary Lineker's England record for number of goals in a tournament, set in 1986.

The Tottenham player also became the first Englishman since Tommy Lawton in 1939 to score in six consecutive internationals.

Kane's goals all came in England's first four games, with three from the penalty spot, and he failed to score in his last three matches at the tournament.

"It shows we had a good group stage and scored a lot of goals," he told ITV after Saturday's match. "Obviously I'm disappointed I couldn't get a goal in the last few games.

"Sometimes it goes for you, sometimes it doesn't. But if I win it, it'll be something I'll be very proud of."

How Kane scored his goals

Only one of Kane's goals came from open play - here is how he scored them all.

Second goal (v Tunisia): Kieran Trippier's corner is flicked on by Harry Maguire and Kane heads in from three yards out.

Third goal (v Panama): From the penalty spot, high into the left-hand corner.

Fifth goal (v Panama): Kane's only goal from open play. Ruben Loftus-Cheek's low strike deflects off his heel and sails into the back of the net.

Sixth goal (v Colombia): Another from the penalty spot, straight down the middle.

The numbers behind Kane's goals

How Kane ranks among his peers