Luka Modric was the player of the tournament, Harry Kane bagged the most goals, Thibaut Courtois had the safest hands and Kylian Mbappe was the breakthrough star.

But did they impress you more than Cristiano Ronaldo and Lionel Messi? Were you blown away by their performances?

With captivating games, superb individual performances and huge shocks, Russia 2018 was a classic.

You supported the underdogs, praised the superstars and were unimpressed with the champions.

Here are the players you rated most highly in Russia...

Three Mexicans, two from Japan and no Frenchmen - Player Rater team of the tournament

France may have won the World Cup, but no member of Didier Deschamps' squad made it into the Player Rater team of the tournament, which is compiled from the highest-rated player in each position to have made at least four appearances in Russia.

We selected the team of the group stage last month but once the knockout rounds were taken into account the final XI sprung a few surprises.

Former Tottenham playmaker Luka Modric (7.17) may have thought that Croatia were "underestimated" by English journalists but the BBC Sport audience selected the Golden Ball winner alongside Spain's Isco (7.17) and Belgium's Kevin de Bruyne (6.90).

Up front, Golden Boot winner Kane slipped out of the side after failing to score in England's last three games, meaning that Mexico's Javier Hernandez is the surprise selection to lead the line (7.11). He is flanked by compatriot Hirving Lozano (7.37) and Belgium's Eden Hazard (7.35).

There was better news for Kane, though. He received more ratings of 10 than any other player in the tournament - 47,000 in total. This is 10,000 more than his nearest rival, team-mate and goalkeeper Jordan Pickford. 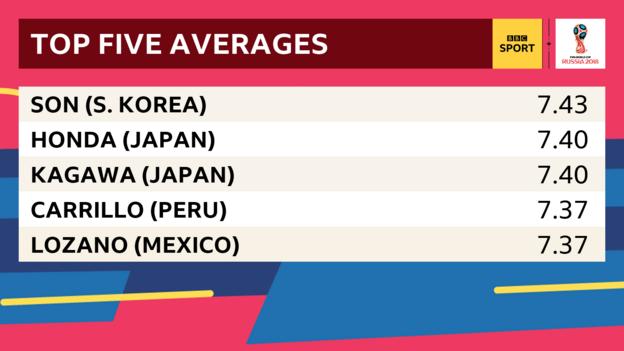 He wasn't in the running for the Golden Ball award for the best player in the tournament but Tottenham forward Son Heung-min actually boasts the highest average rating of all players to have appeared in three or more games at the World Cup.

Beating Germany seems to have carried a premium in your eyes - with all 14 South Korea players who appeared in the 2-0 win scoring over eight for that match.

Japanese pair Keisuke Honda and Shinji Kagawa are also surprisingly high in the list, with both scoring highly against Colombia and in the defeat by Belgium.

Completing the five are Lozano and Andre Carrillo, with the former Watford winger impressing for Peru throughout the group stage. 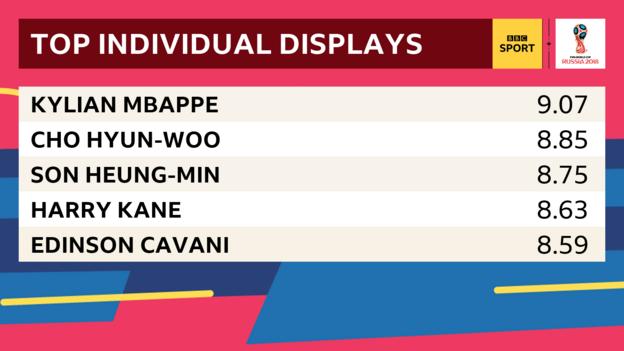 With four goals in the tournament and one in the final, it's perhaps a surprise not to see France 19-year-old Kylian Mbappe make the first XI.

The Paris St-Germain forward was marked down for his 12-minute appearance as a late substitute in the dire goalless draw with Denmark - his display gave him a score of just 3.61. How bad can you be in 12 minutes?

However, his two-goal showing against Argentina in the last 16 gave him a score of 9.07 - the highest individual rating of the tournament and the only player to end a game with a score of over nine.

South Korean goalkeeper Cho Hyun-woo was second for his display in that famous Germany victory, with Son in third place.

Kane clocked 8.63 for his hat-trick against Panama, while Uruguay's Edinson Cavani earns a place on the leaderboard after scoring twice to beat Portugal.

Other players to register scores over eight in matches include Iceland goalkeeper Hannes Halldorsson - when he saved a penalty from Lionel Messi, Modric, Isco and De Bruyne.

Pride of the Lions? England's players of the tournament

Trippier was the only England player to make the team of the tournament and the only one to end the World Cup with an average of more than seven.

Perhaps unsurprisingly, the players' scores dipped as England went on in the tournament. 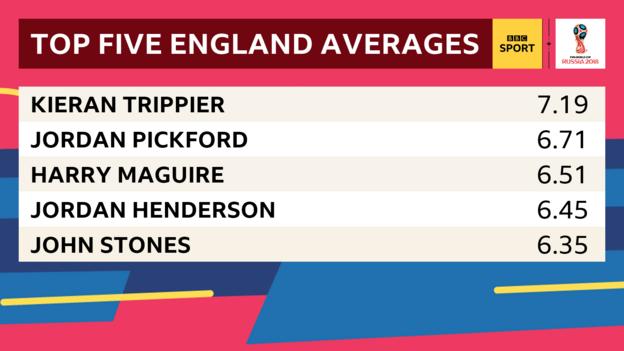 Congratulations to anyone who would have predicted that top five just a few months ago...

Kane scored six times but misses out after a dismal rating of 3.16 in the play-off with Belgium but his score of 8.63 against Panama was the highest individual rating for an England player.

No Ronaldo, Messi or Neymar

Russia 2018 was not the World Cup for the big names as Lionel Messi, Cristiano Ronaldo and Neymar all failed to reach the semi-finals.

Ronaldo did score a hat-trick in his opening game against Spain but ended the tournament with an average rating of 6.12, a score which ranked him 187th of all players in Russia to card a score.

His foe and rival Messi only recorded an average of score of 5.25, including a bad day at the office with a 3.9 against Croatia in the group stage. He ended down in 426th place.

And PSG forward Neymar really didn't impress you. The Brazil forward scored twice but only managed an average score of 4.47 - which left him the 542nd player on the list and below Panama's Armando Cooper.

The lowest-ranked player to play more than once was Germany's midfielder Sami Khedira with 3.19. His score of 2.25 against South Korea was the lowest score awarded - though 13 Germany players scored lower than three in that match.

South Korean full-back Ko Yo-han had perhaps the most remarkable World Cup from a statistical point of view. His only appearance was an 11-minute substitute cameo in the win against Germany, during which he touched the ball five times.

He scored 8.37 to rank number one in the ratings of all players to have featured in that game.

Why didn't you rate France?

France were champions but you didn't rate them too highly.

Mbappe was the best rated player of Didier Deschamps' side, ending the tournament with an average score of 6.54, just 0.01 ahead of Manchester United's Paul Pogba.

Sixteen of the squad averaged under six throughout the tournament, with Chelsea forward Olivier Giroud averaging 5.53 despite not having a single shot on target in the whole World Cup.

Your team of the tournament

We also gave you the chance to select your team of the tournament via our team selector.

Unsurprisingly, more of the established superstars made the cut, although there is some crossover with the Player Rater.

However, winners France are represented this time around, with defenders Raphael Varane and Benjamin Pavard, midfielder N'Golo Kante and forward Mbappe, who received the second most picks, all amongst the most selected. 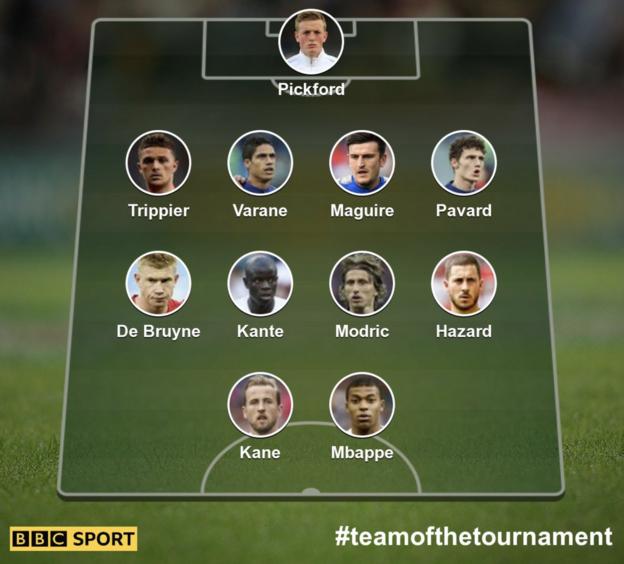 You can still pick your team below and share it with your friends...