A World Cup which began with low expectations for England ended with positivity and optimism, despite the pain of losing in the semi-finals to Croatia.

After failing to get out of the group in 2014 and losing to Iceland at the European Championship in 2016, the performances of Gareth Southgate's squad - both on and off the pitch - restored pride in the national team.

But now that the euphoria of what they achieved - a first semi-final appearance in 28 years and only the third in English history - is subsiding, what did we learn about this team?

And did their unexpected success mask some deficiencies?

Were England overly reliant on set-pieces?

England's dominance from set-pieces was one of the most striking aspects of their performances in Russia, with training-ground routines - the "love train", anyone? - regularly translating into important goals.

They clearly prepared extensively when it came to maximising free-kicks and corners and their nine goals from set-pieces was a record at a World Cup for any team since the data was first recorded in 1966.

Harry Kane scored three penalties, Kieran Trippier netted a free-kick and they scored from four corners and a free-kick routine.

But that does mean they only scored three times from open play in six games, one of which was a lucky deflection off Harry Kane against Panama.

So 75% of England's goals came from set-plays - more than any other team, excluding four sides in the group stages who only scored two goals.

So did that reliance on set-pieces hide other attacking deficiencies?

England had fewer shots on target per 90 minutes than half of the teams at the tournament, behind the likes of Tunisia, Iceland and Peru.

And while they had more shots on target from set plays than anyone else - an average of six per 90 minutes - only five teams created fewer from open play. 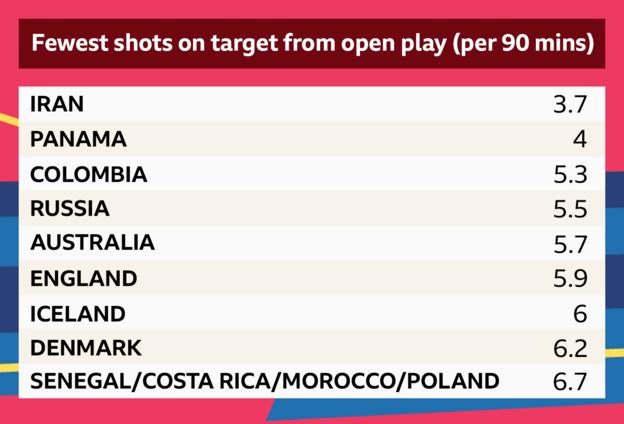 Did England lack a creative player?

For a team with the second-highest goals tally (12) and containing the likely Golden Boot winner (Kane), it seems strange to suggest they lacked creativity.

But take set-pieces out of the equation and England's key attacking stats show a team struggling to make a major impact in the final third. 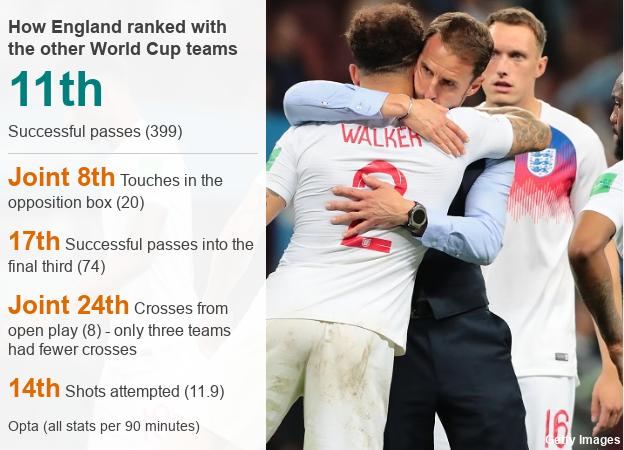 Remarkably, defender Harry Maguire had more touches (20) in the opposition box than any other England player apart from Raheem Sterling (22).

In fact, three of England's six goalscorers in Russia were defenders - with John Stones scoring twice against Panama and Trippier and Maguire netting in the knockout stages.

Even Kane, despite his six goals, struggled for scoring chances. After his two close-range finishes against Tunisia, his remaining four goals included three penalties and one fortunate deflection from a Ruben Loftus-Cheek shot for his hat-trick against Panama.

And he had only one shot on target in the knockout stages, his penalty goal against Colombia in the last 16. So not a single one from open play.

Was that down to service? England's lack of a world-class creative player - the other semi-finalists had the likes of Luka Modric, Ivan Rakitic, Kevin de Bruyne, Eden Hazard, Paul Pogba and Antoine Griezmann - had been highlighted as a potential weakness before the tournament, and that concern seemed to be borne out in Russia.

To overcome the absence of such a player in midfield, Southgate utilised the energy and running power of Jesse Lingard and Dele Alli as part of a midfield three. They worked tirelessly, but it is debatable whether they had the attacking impact that might have been expected. England ranked 16th of the 32 sides when it came to dribbles, with a relatively low 55.05% success rate.

The easy side of the draw?

England are not the first team in World Cup history to have had an unusually attractive route through the tournament - in 2002 Germany made it to the final after facing Paraguay, the United States and South Korea in the knockout stages.

In Russia England negotiated group games against Tunisia (ranked 21st in the world) and Panama (55th), but their first meeting against one of the tournament favourites ended in defeat, albeit they and Belgium made a combined 17 changes for a game with little at stake.

The bonus of finishing second in Group G was that England avoided the likes of Brazil and France, while Spain's shock loss to Russia meant they entered the quarter-finals as the only previous World Cup winner in their half of the draw.

In their first knockout game England came up against Colombia - ranked 16th - but even then fortune appeared to be on their side, as their opponents were forced to play without injured star forward James Rodriguez, the Golden Boot winner at the 2014 World Cup.

England went through on penalties after a 1-1 draw - their first World Cup shootout win.

That was followed by a routine 2-0 quarter-final victory over a limited Sweden, who are 24th in the world. Then in Croatia (ranked 20th) they faced arguably the only world-class players they came up against - outside the Belgium game they lost - and were knocked out in extra time.

So is that a series of results which represents an overachievement for the second youngest squad at the tournament? Or was it par for the course?

Did England get lucky with injuries?

No praying for metatarsals, no oxygen chambers. For once, England's World Cup was largely free of injury drama.

Discounting the Belgium game which saw a raft of changes, Southgate was able to name the same starting XI in four of the five other matches. The only other change he made saw Loftus-Cheek start instead of the injured Dele Alli against Panama.

Alli returned for the knockout stages, while Jamie Vardy was the only other player to suffer an injury which would have put his participation in doubt, and he was not a first-choice starter.

No players were suspended during the World Cup, with Fabian Delph missing the Colombia match so he could be with his wife for the birth of their daughter.

Whether that fitness record was down to luck or sound preparation and preventative work by the medical team, it was a rare instance of England playing at a major tournament with all of their key players at peak fitness.

But, ultimately, it was not enough to take them to the final.

So how should we view this team?

BBC's pundits all agree the future is bright for this England team.

"This bunch of players have brought the nation together and the fans haven't sung like this for years," said former defender Rio Ferdinand. "We wanted this team to come out with an identity and a philosophy of playing, and I think they have done that."

Ex-striker Alan Shearer said: "We said before the tournament that if they gave absolutely everything in every game, everyone at home would be happy.

"There are so many positives to take out of the tournament. We did not expect to get to the quarters and will go home after this with our heads held high. Finishing third would be excellent.

"After being embarrassed by Iceland to this, being applauded off, that is brilliant progress and something to work to. Well done guys, you have given us plenty to shout about."

And perhaps that positive mindset and reconnection with fans is the biggest takeaway.

So rather than look too hard at what has gone by, England should just heed what Kyle Walker said: