Anticipation is reaching fever pitch as England look to reach their first World Cup final since 1966 by defeating Croatia on Wednesday.

Millions of fans will follow the match, which takes place in Moscow's Luzhniki Stadium from 19:00 BST.

England's sole World Cup triumph came 52 years ago, and they are in the last four for the first time since 1990, when they lost to West Germany.

The winners will face France in the final at 16:00 BST on Sunday.

Streets are set to be deserted as people cram into pubs, gather around big screens or stay at home to cheer on the team.

Hundreds of England supporters have been arranging last-minute trips to Russia after the side booked their semi-final place with a 2-0 win over Sweden on Saturday.

Croatia have made the last four once before - losing to hosts and eventual winners France 20 years ago.

"We respect everyone - England, France. But none of the squads is better than us," said head coach Zlatko Dalic.

England will wear an all-white kit for the game, which is being refereed by Turkish official Cuneyt Cakir.

As the country enjoys a long heatwave, England's success has heightened the feel-good factor.

From ice cream vans to brass bands - the 'Three Lions' song has become the soundtrack to the summer and is set to top the charts again on Friday after a massive spike in streams and downloads.

Originally written by The Lightning Seeds and comedians Frank Skinner and David Baddiel for the Euro '96 tournament, its famous "football's coming home" chant has been resurrected.

Southgate has said he could not listen to the song for 20 years after his penalty shootout miss in the semi-final, but added: "It's nice to hear people enjoying it again."

Massive celebrations have followed England victories so far, and a crowd of 30,000 is expected to watch the match on a big screen at London's Hyde Park, with events in other cities including Manchester, Sheffield, Liverpool and Bristol.

However, police have warned fans not to "overstep the line".

They are hoping to avoid a repeat of the alcohol-fuelled scenes at the weekend when people clambered over cars, buses and emergency vehicles.

Ambulances dealt with as many calls as they traditionally do on New Year's Eve.

Bluffer's guide to the match

Huge numbers have been following England's progress through the tournament, and more are expected for Wednesday's showdown.

Television: Coverage of England games has been divided between the BBC and ITV, and the semi-final will be on ITV. Both channels will broadcast Sunday's final.

Radio: Build-up begins at 06:00 BST with Rachel Burden in Moscow, followed by Robbie Savage's World Cup Breakfast (08:30) and then Your Call (09:00). Mark Chapman continues coverage from Moscow from 16:00. John Murray is the match commentator, with reaction afterwards in 606 hosted by Kelly Cates.

Online: All the latest news, video clips, photos and rolling updates will be available on the BBC Sport website from 07:00 before full live text commentary on the match and highlights afterwards.

How the sides shape up

Southgate hopes to name an unchanged side as England look to continue the remarkable turnaround from their humiliating Euro 2016 defeat by Iceland.

With a young squad and muted expectation, they began the tournament as 16-1 outsiders with bookmakers, but the odds have plummeted to below 3-1 and they are rated favourites to beat Croatia.

England recorded their biggest victory at a World Cup when beating Panama 6-1 and won their first penalty shootout at the tournament to overcome Colombia. 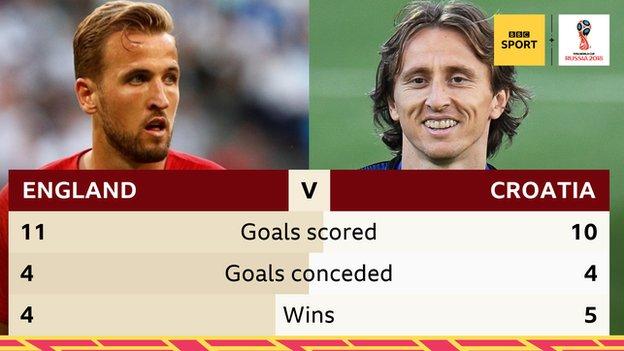 Croatia's previous semi-final in 1998 was their first World Cup as an independent nation.

They are 20th in world governing body Fifa's rankings - eight places below England - but impressed in a 3-0 victory over Argentina.

This is a massive opportunity for both sides - the first time in the tournament's history that none of Brazil, Germany or Argentina have made the semi-finals.

One fan who has split loyalties is BBC presenter Adrian Chiles, whose mother is Croatian.

"I want them both to win and neither to lose, but in the end, I am more English than Croatian. I feel quite strongly that England will prevail," he told BBC Radio 5 live.

But Croatia's 2001 Wimbledon tennis champion Goran Ivanisevic had a message for any England fans who underestimate his compatriots.

"I hope we don't lose to the English because you are already in the final, you have already won, you're coming home, you're bringing a trophy, you're so arrogant," he said.

Southgate has won plaudits for leading the team in a calm, assured manner and taking pressure off the players.

He has also become an unlikely style icon, and supporters are set to honour him with a fashion compliment on what has been described as 'Waistcoat Wednesday'.

Southgate, 47, may have helped to boost waistcoat sales but he has also fostered a more relaxed atmosphere in the England squad.

Players have taken on the media in darts matches, in contrast to the last tournament when they refused to reveal the winner of an in-house darts competition.

"Previously when we came to play for England, it was a national team, now it's like a club," said England defender Kyle Walker.

"We used to go and train and then sit and stare at the same four walls. Now we're in all of each other's rooms. That would not have happened previously and it's all credit to the gaffer."

The squad have embraced social media, had fun on inflatable unicorns in a swimming pool and even larked about with a rubber chicken during training on Tuesday.

When the BBC Sport website asked fans how they had been won back, or converted, to the Three Lions, there was a long stream of responses.

"The England team seem mostly like just ordinary guys, no huge ego or air of self-importance. No tantrums, sulks or bad behaviour on or off the field," said fan Nigel Howe.

What if England win?

Some supermarkets, including Aldi and Lidl, plan to close their doors early on Sunday if England are in the final.

But organisers of the Wimbledon tennis tournament say they will not change the time of the men's singles final, which starts at 14:00 BST and is likely to overlap with the World Cup final two hours later.

A petition calling for Monday to be made a Bank Holiday should England win the World Cup has passed 100,000 signatures.

Meanwhile, Lineker may be left to rue his declaration earlier in the year that he would be present the BBC's Match of the Day programme in a mankini should England triumph.