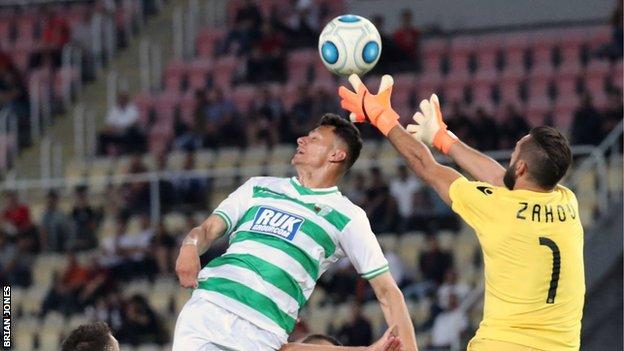 The New Saints face an almost impossible task in the first qualifying round of the Champions League after being outclassed by Shkendija in the first leg.

The Welsh champions trailed 2-0 at the interval in Macedonia through goals from Izair Emini and Besart Ibraimi.

The impressive Ibraimi scored three further goals in the second half to cap off a night to forget for Saints.

Saints host Shkendija in the second leg at Park Hall in Oswestry on 17 July.

Summer recruits Ben Carbango and Danny Redmond were handed their debuts as Saints embarked on their 12th Champions League campaign.

Scott Ruscoe's side were facing opponents which had won the Macedonian championship by a margin of 35 points and in doing so had scored 101 goals.

Saints made a nervy start as Shkendija, playing their home game in the national stadium in Skopje rather than their home city of Tetovo, applied the early pressure.

It came as no surprise that the hosts went ahead on 14 minutes when a well worked move down the left flank was deflected into the path of Emini, who netted from close range.

Ibraimi's effort from outside the box doubled their lead seven minutes before the break.

Ryan Brobbel had Saints' best chance of the game in the opening minute of the second half with his effort deflected wide, but two further goals put Shkendija firmly in control of the game and the tie.

Ibraimi's low drive from 30 yards beat Paul Harrison to make it 3-0 before the Macedonian international completed his hat-trick with a stunning free-kick.

Harrison had no chance with Ibraimi's fourth five minutes later, with the striker beating Harrison with a curling shot from the edge of the box to complete a comprehensive win for Shkendija.

The winner of the tie face Torpedo Kutaisi from Georgia or FC Sheriff of Moldova in the second qualifying round, with ties to be played on 24-25 July and 31 July-1 August, while the losers will drop into the Europa League.