Sweden stand between England and a place in the semi-finals of a World Cup for the first time since 1990.

Janne Andersson's side arrived in Russia without a win in six games, no goal in 337 minutes and without national hero Zlatan Ibrahimovic.

Yet Sweden, 24th in Fifa's rankings - 12 places below England - find themselves two wins from a first final since 1958.

We take a look at the Scandinavians as they prepare to meet Gareth Southgate's team in Samara on Saturday (15:00 BST) - Sweden's first World Cup quarter-final since 1994.

How Sweden got to the quarter-finals

This is Sweden's first World Cup since making it to the last 16 in Germany in 2006, a campaign which included a 90th-minute equaliser by Henrik Larsson in a 2-2 group draw with England.

They got to Russia the hard way.

Despite beating France, Sweden were runners-up to Les Bleus in their qualifying group although they did finish above the Netherlands.

They then beat four-time world champions Italy 1-0 over two legs in the play-offs to book their place at the World Cup.

In Russia, Sweden were placed in Group F along with world champions Germany, Mexico and South Korea yet finished top with six points before overcoming Switzerland 1-0 in the last 16.

No Zlatan but beware Sweden's ice-Berg

There was talk Ibrahimovic - one of the most decorated and iconic players of the modern game - could come out of international retirement for this tournament.

Ibrahimovic, who announced his retirement after Sweden were knocked out of Euro 2016, is not part of Andersson's squad yet Sweden are progressing nicely without the former Manchester United striker.

In total, they have scored 33 goals in 16 games in qualifying and at this tournament. Goals have come from all areas of the team. In qualifying, defenders Mikael Lustig, Victor Lindelof and Andreas Granqvist scored seven of Sweden's 27 goal between themselves.

Striker Marcus Berg was Sweden's leading scorer in qualifying with eight goals in 11 matches, including four in one game against Luxembourg, but has yet to find the net in Russia despite starting all four games.

Indeed, Berg has had 13 shots without scoring, the most of any player to fail to score at this World Cup.

However the 31-year-old, who plays his club football in the United Arab Emirates for Al Ain, did manage to win a penalty in the 3-0 group win over Mexico on 27 June.

Sweden have netted six times in four games at this tournament. However, only half of those have been scored in open play by a player in a Swedish shirt.

An own goal helped seal their win against Mexico, while former Wigan Athletic player Granqvist is the first Swede to score two or more goals in a single World Cup tournament since Larsson in 2002 after netting two spot-kicks against South Korea and Mexico.

Sweden also scored a further four penalties in qualifying, with Granqvist getting three of them.

Sweden revelling in their underdog status

It has not gone unnoticed that BBC Radio 5 live pundit Pat Nevin - a Scot, it should be noted - suggested the other day that 99 times out of 100 England should beat Sweden.

Indeed, in the Swedish camp near Krasnodar they are absolutely delighted with this kind of comment.

The players were discussing it the day after their win over the Swiss and see it as a sign that the message they love to spread is once again taking hold.

"Well, it is fun for England to have that sort of confidence," said captain Granqvist. "Let's just see how the game goes."

France and Italy in World Cup qualification, Mexico and Switzerland here in Russia - all have under-estimated Sweden, all lost. Germany were minutes away from the same fate in their group game.

Sweden know that they lack star quality, they know that their strength is that they are a team in the true sense of the word; a group of individuals working towards a common goal.

The Swedish players think they can frustrate the English by playing in a defensive, kind of boring way. They want to slow the game down, draw its sting.

Southgate's team showed that they could stay cool and focused against opponents who tried to spoil and aggravate in seeing off Colombia on Tuesday.

Now they must show that they have the intelligence to recognise the Swedish plan and the patience to overcome it.

'Lack of pace and short of ideas'

Granqvist made more clearances than anyone else against Switzerland but he is their biggest voice as well as their stand-out defender.

Granqvist is the man who organises everything for them at the back, and he does a very good job. That organisation is their obvious strength - they were really compact against the Swiss and denied them any space between their defensive lines.

But despite Sweden's impressive defensive record in Russia, I can see England causing them lots of problems in a way Switzerland could not do.

With the speed and mobility of England's attacking players, including their full-backs, I think they can move Sweden around in midfield as well as defence.

If they make the pitch as big as possible, and get Kieran Trippier and Ashley Young bombing forward, then I am sure they will find some gaps.

I don't see Sweden causing England many issues at the other end, though.

Pace is something that Sweden don't have when they come forward and they seemed short of ideas - they only had a handful of opportunities against Switzerland and had a little bit of good fortune with the deflected goal they scored.

I know they have momentum but, to be brutally honest, they don't really look like scoring goals.

England and Sweden have met each other 24 times, and things are very close with eight English wins, nine draws and seven Swedish successes.

However, England won six of the first nine matches, and have only won two of the most recent 15 games - with both coming in the 2011-12 season.

England won 1-0 in a Wembley friendly in November 2011 with Gareth Barry scoring the only goal, before England beat Sweden 3-2 in a thrilling Euro 2012 group game.

Andy Carroll scored a wonderful header to put Roy Hodgson's side ahead, Sweden scored twice to take a 2-1 lead, before goals from Theo Walcott and Danny Welbeck gave England the three points.

England and Sweden have twice met in the group stages of World Cup finals, drawing 1-1 in their first match of the 2002 World Cup in South Korea and Japan and then drawing 2-2 in Germany four years later.

The only other time England and Sweden have met during a major tournament came back at the 1992 European Championships, which were staged in Sweden.

Again it was a group match, with the winners going into the semi-finals. David Platt put Graham Taylor's England ahead early on, Jan Eriksson equalised before Tomas Brolin linked up with Martin Dahlin to score a late winner and seal a 2-1 victory to send the hosts through and knock England out.

That game was also Gary Lineker's last for England. He needed one goal to equal the then-record of most England goals, which was held by Sir Bobby Charlton on 49 goals, but with the score at 1-1, Lineker was taken off after 62 minutes and replaced by Alan Smith.

The last meeting between the two nations was an international friendly in November 2012, which included an England debut for 17-year-old Raheem Sterling. However, the game saw Ibrahimovic produce a stunning individual performance as he scored four times in a 4-2 Sweden win, including a spectacular 30-yard bicycle kick.

Former England manager Sven Goran Eriksson expects his home country to win the match. He told Swedish newspaper Expressen: "England will struggle to score goals against Sweden. I think it will be a Swedish victory."

In a later interview with Aftonbladet, Eriksson said he thought the tie would at least go to extra time. "You can't claim that either of the two teams line-ups have lots of goal chances in open play," said the Swede, who was in charge of England from 2001 to 2006.

"There will be few goals and some detail that determines the outcome of the game. I'll say draw after 90 minutes and then we'll see how many people have cramps in each team."

Despite the England players being dubbed 'The Golden Generation' when Eriksson was in charge, England went out in the quarter-finals of both the 2002 and 2006 World Cups.

"England is England, now they think they'll win the World Cup again," added Eriksson. "Frankly, they have beaten Tunisia and Panama. It takes a little more to win the World Cup. They will not get so many opportunities against Sweden."

Former Sweden midfielder Hakan Mild thought England will underestimate the Scandinavians. "England is easy to score against", Mild said in Goteborgs-Posten. "They think they are so damn good. They are not.

"You hardly get terrified when you see the team. They are spoilt youths who earn millions. They don't have the total desperation required."

Kennet Andersson, who helped Sweden finish third in the 1994 World Cup, thought Sweden's better defence would be crucial. "Sweden has renewed their defensive game in such a way that the opponents can't unpick it," he told SVT.

"I think there are many teams who don't want to meet Sweden, because they can't make their game work against us. I don't understand how England will be able to score any goals against Sweden."

Sweden goalkeeper Robin Olsen has kept three clean sheets at the 2018 World Cup, while England have conceded one goal in each of their four games. 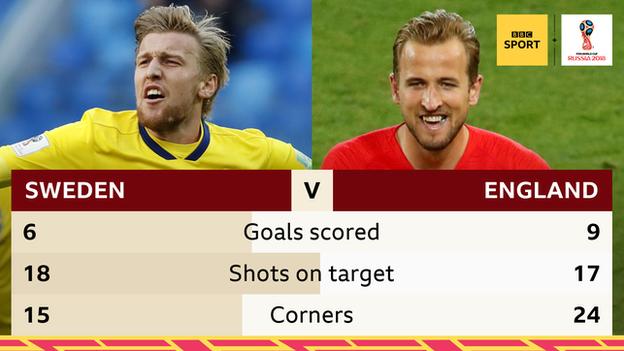 However, England have more goals, more shots and corners than the Scandinavians.

Interestingly, England's ball possession at this World Cup is 53% compared to Sweden's 38% while the Three Lions have attempted 2,140 passes to their opponents' 1,113. 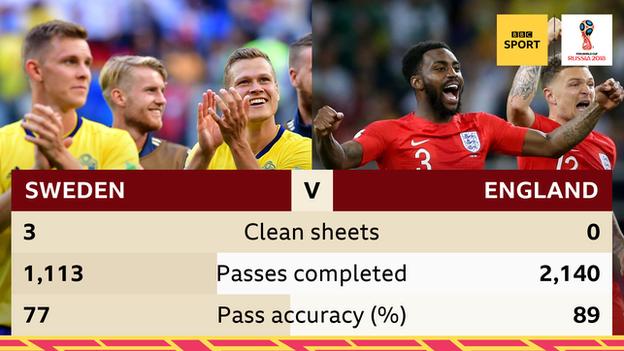 England have also had 55 goal opportunities and covered 455.23 kilometres - that's 282 miles. Sweden have not covered as much ground. They've clocked up 419 kilometres or 260 miles. 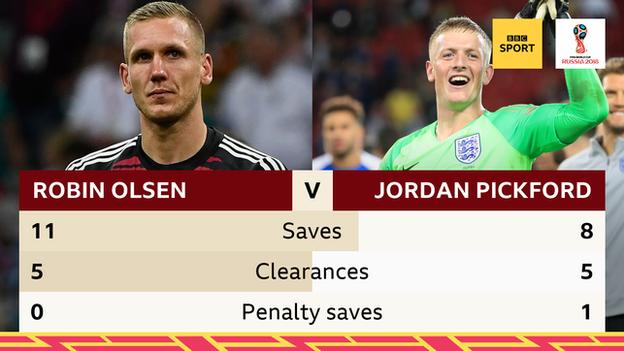 Getting shirty - what the media is saying

"Things have gone a bit too well for Sweden", a spokesman for Adidas told SvD.

"We have been told here at customer service to tell the customers that there is no point going to the shops. The shirts are almost completely gone," a worker at Adidas' customer services was quoted saying.