Luka Modric is from a "different planet" and the best player in Croatia's history, says team-mate and fellow midfielder Ivan Rakitic.

Modric, 32, has scored twice at the World Cup, leading his side to a last-16 tie with Denmark by coming through the group stage with a 100% record.

Rakitic has played alongside Spain midfielder Andres Iniesta at Barcelona.

"Both of them are among the best players ever in their positions," said the 30-year-old.

Modric joined Real Madrid from Premier League side Tottenham in 2012 and has won three Champions League titles, as well as La Liga and the Copa del Rey.

Iniesta is one of the most successful players in history, and left Barcelona at the end of last season to join Japanese side Vissel Kobe.

He had been at the Spanish giants since the age of 12, making 674 senior appearances and winning 32 trophies.

Rakitic said: "It seems like both of them are from different planets and they came to play football with us mortals here.

"It has been a great honour to play with Andres in the last four years at Barcelona, and with Luka for the last 11 years for Croatia.

"If I created a football team, I would have both of them in my team. Andres is one of my best friends and I see Luka as my big brother."

Former Real and Barca midfielder Robert Prosinecki, who won 49 caps for Croatia, has said Modric is the country's best ever player.

"I would agree completely," added Rakitic. "Not only that Luka is the best player, but he is a great person, a leader and we are following him. I am sure he can feel our confidence in him."

On Sunday, Modric will come up against a man who succeeded him at Spurs - Danish midfielder Christian Eriksen. 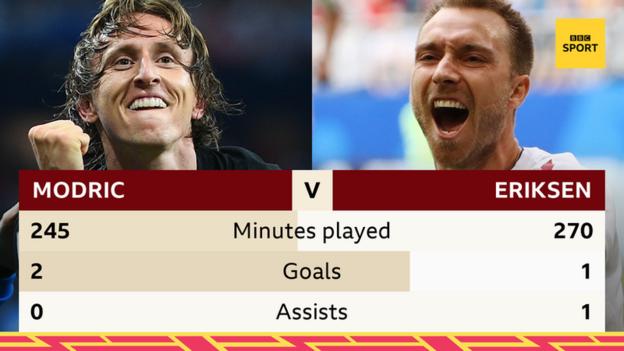