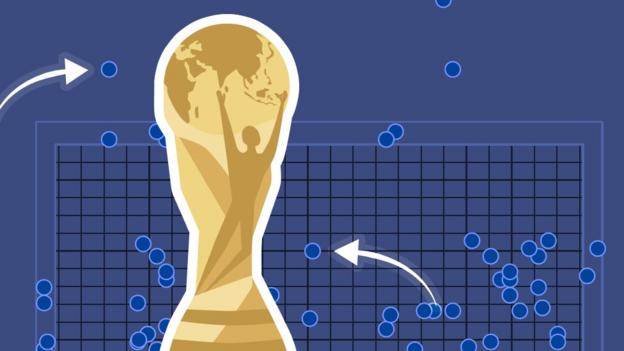 What makes the perfect World Cup penalty? Who has the best record from the spot? And does luck really come into it?

As the tournament enters the knockout phase we have a look at the history of World Cup shootouts, 26 of which have taken place since they were introduced in 1978 - though none were needed in Argentina that year.

Of the 240 kicks at World Cup penalty shootouts before the 2018 tournament in Russia, 170 were scored - a conversion rate of just over seven out of 10. 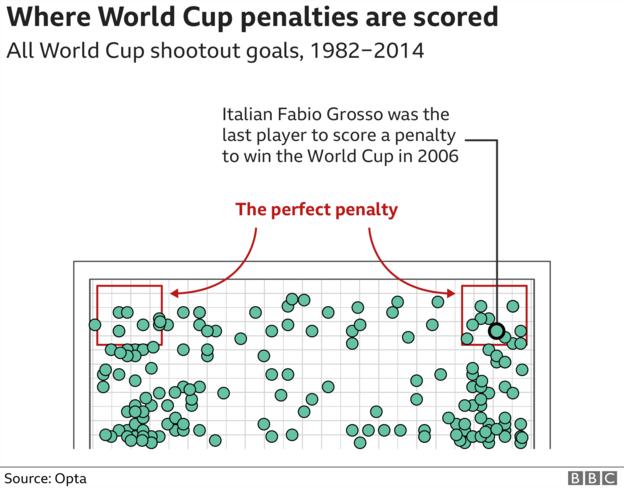 Of the successful penalties, the most popular location is low and to the keeper's left, according to data from football experts Opta.

The worst penalty to take is low and in the middle area of the goal, with a success rate of only 58%.

If a player does decide to hit his penalty straight down the middle, aiming high is the answer. No goalkeeper has saved any of the 15 World Cup shootout penalties struck high and centrally.

In fact going for the top part of the goal is generally a good strategy, as Harry Kane demonstrated in England's group game against Panama, blasting both his kicks into the top left corner of the net.

Opta's data shows that over 90% of penalties struck high and either side of the centre of the goal have been scored.

But that approach carries with it the risk of missing the target altogether, as Italian forward Roberto Baggio discovered in the 1994 final, blazing his kick over the bar to hand Brazil victory. 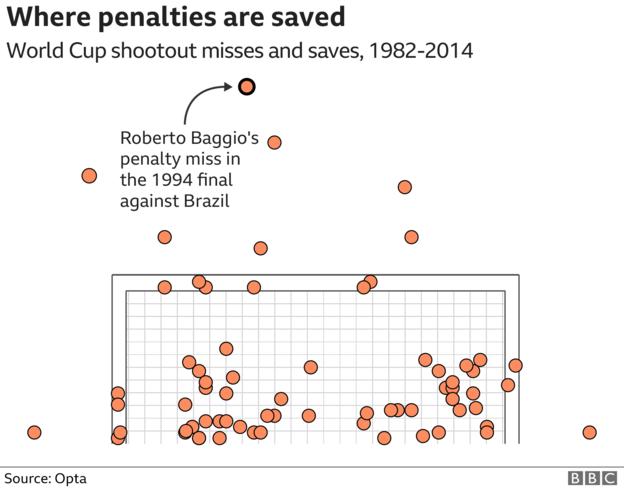 Only about one in five penalties have actually been saved - 49 out of 240 attempts - with 28 goalkeepers responsible for those saves.

The penalties saved have been shared almost equally to either side of the keeper, with 24 saves made diving to the left and 25 to the right.

Twelve strikes have hit a post or the crossbar.

Can anyone beat Germany's record?

With defending champions Germany eliminated in the opening stage for the first time since 1938, Russia 2018 is without the most successful penalty shootout team.

Only one German, Uli Stielike in the competition's first shootout between West Germany and France in a 1982 semi-final, has ever missed in a penalty competition at a World Cup. Since then, Germany have scored 15 in a row and won all four shootouts they've been involved in.

But given Germany's early exit, Argentina could overtake them as the nation with the most shootout victories. 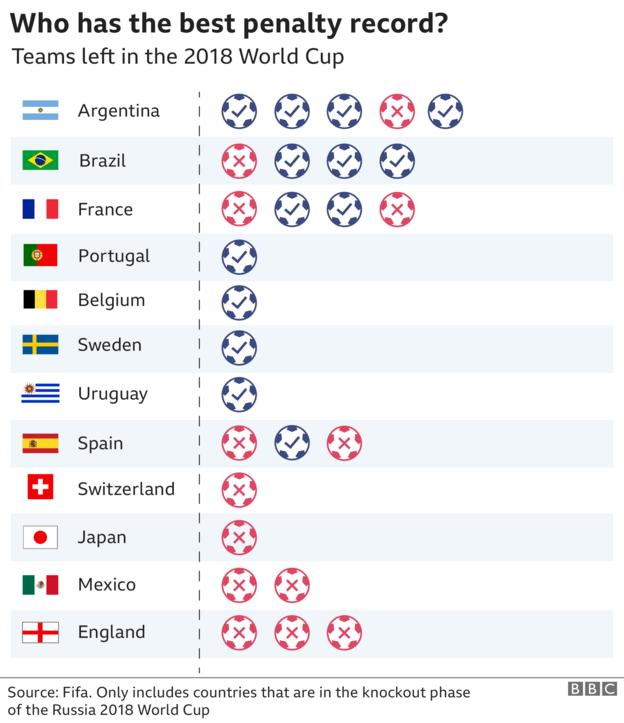 Lionel Messi may have missed from the spot against Iceland in the group stages, but his countrymen have a good record in shootouts, notching up four wins from five attempts. 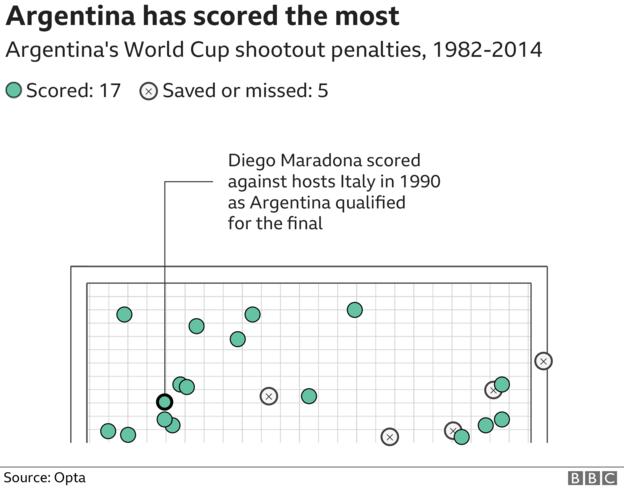 At the opposite end of the scale, England have the worst record, something that will hardly come as a shock to anyone who has followed the national side.

The Three Lions have lost all three of the shootouts they've been involved in, converting just seven of their 12 spot-kicks at World Cups. 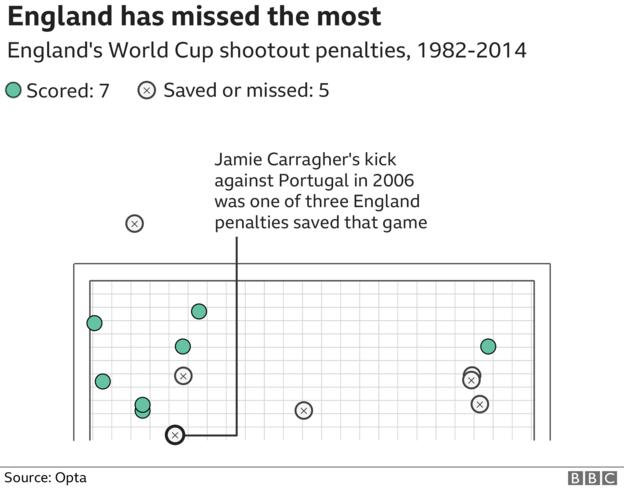 England's penalty defeat at the hands of Portugal in 2006 was one of the worst in terms of the percentage of penalties scored. The two sides managed to score only four spot-kicks between them out of a total of nine attempted.

In that game, Portugal's keeper Ricardo saved three kicks, the most in a single shootout. Argentina's Sergio Goycochea and Germany's Harald Schumacher hold the record overall, having stopped four each.

Mexico are another side with a poor record from 12 yards, having lost both their shootouts.

Switzerland have arguably an even more ignominious record. They are the only team to have taken part in a World Cup penalty shootout and failed to score a single kick.

Of the sides that have made it to the last 16 this time round, hosts Russia, Denmark, Croatia and Colombia have never been involved in a World Cup penalty shootout... yet.

The penalty shootout is often referred to as a lottery, and luck actually comes into play even before the first player has struck the ball.

As the current system stands, teams take turns in a shootout, with the choice of who goes first decided by a coin toss. Team A goes first, then team B, then team A again and so on.

The side that wins the coin toss and decides to go first has an important advantage, with teams going first having triumphed 60% of the time.

Researchers from the London School of Economics blamed the psychological pressure of 'lagging behind' for affecting performance.

Teams going second in World Cup penalty shootouts have a 69% conversion rate, whereas the team going first have a 73% record.

The English Football League has experimented with a new ABBA format to try to address this.

With this format, after an initial spot-kick, teams each take pairs of kicks in an attempt to reduce the pressure on the side taking the second kick in a shootout - but it will not be used at this World Cup.

Penalties taken in a shootout are less likely to find the back of the net than those taken in regular play, according to research by Ben Lyttleton, football writer and author of a book on penalties.

Lyttleton found that the conversion rate for penalties in open play in international tournaments and national cup competitions in England, Germany, Italy, Spain and the Netherlands over a 10-year period was 78%, compared with 74% in shootouts in the same competitions.

Other than the additional pressure a shootout brings, this is potentially explained by the fact that players who may not be regular penalty-takers have to step up.

And the pressure seems only to ramp up once the sequence gets under way. Historically the eighth penalty - of the scheduled first 10 - is the one that is missed most often in a World Cup shootout, with two out of every five attempts ending in a save or a miss. 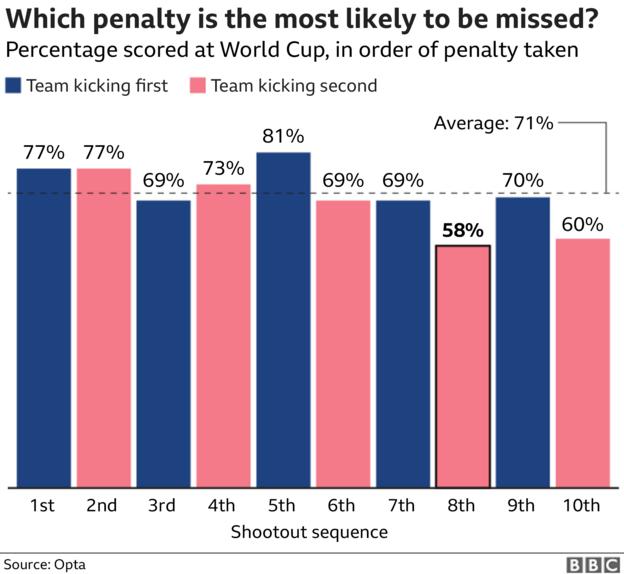 And if there is no winner after each side have taken five penalties, the shootout goes to sudden death, with pairs of penalties taken until one of the teams scores and the other doesn't.

But that has happened only twice in a World Cup - in that first ever shootout in 1982 and in Sweden's quarter-final victory over Romania in the USA in 1994.