England are the kings of the set-piece so far at this World Cup, and it is something to be proud of.

After two games, we have scored more goals from free-kicks or corners than anyone else at this tournament with four - or five if you include Harry Kane's second penalty against Panama, which came after he was fouled at a corner.

Gareth Southgate's side have also managed more attempts at goal from set-pieces than anyone else in Russia - 16 in the first two matches.

To put that into context, there have only been two World Cups or European Championships in the past 22 years where we have had more than that over the whole tournament.

It is so valuable to have a threat like that and it has left teams fearing us whenever we stand over a dead ball near their area.

Even in the first game, every time we got a corner it felt dangerous - and Tunisia knew it. For the same reason, Panama were wrestling players to the ground every time the ball came into the box.

It is clear Southgate has identified set-pieces as an area where he can make a difference, and that is going to continue beyond the Belgium game and into the last 16 too.

They are opportunities to score goals, no matter who the opposition are. And, the further we go in this tournament, the tighter the matches will get - and the more important they will be.

Targeting set-pieces is nothing new for England - Graham Taylor used to work on them until the players literally fell over - but in all my time playing for and watching the national side, I cannot remember us being so effective at them.

Our success is testament to the meticulous approach of manager Gareth Southgate, plus the hard work from the players - and we are already seeing the rewards.

It is proving very important too. England only created seven chances in open play against Tunisia and Panama and, so far at this World Cup, only one team - South Korea - has managed fewer.

Against the same opposition we have faced, Belgium made 26 chances in open play, which is very impressive. In an ideal world, we would have done the same but, really, it does not matter.

Look at how Portugal won Euro 2016 - of their seven matches, they only won one in 90 minutes. Similarly, if we could win every game we play in Russia from a set-piece, I'd happily take it.

Stones goal shows the work that has gone on

England's fourth goal against Panama was an example of the preparation that has gone into their free-kicks and corners on the training ground. It is not a case of the ball just being whipped into the box.

Kieran Trippier plays it short to Jordan Henderson, who delivers the ball to Harry Kane at the far post, and his header back across goal finds Raheem Sterling to come rushing in. Yes, Raheem missed a sitter, but John Stones was there anyway to put it in.

A move like that involves hours and hours of practice, and everyone has to know their role inside out.

To make it work in a game situation also needs the players to be sharp, alert and aggressive - not only in wanting to get the ball but in managing to get away from their marker.

You need speed and pace to do that, and then the most important thing is that you have got to have the skill to put it away.

So the fact they are working so well is a good sign for England in a wider sense at this World Cup. It shows everyone is on the same wavelength, working together and taking on ideas, and is even more evidence of a happy camp.

'There is always one dope that falls asleep'

As a player, I always knew there would be opportunities at set-pieces, if not for me then for one of my team-mates.

At Newcastle, Sir Bobby Robson would tell us "there is always one dope who falls asleep" and we would try to pick out the defender who would let his side down.

Sir Bobby was right, because the dope is always there - someone who is slow to react or forgets his job. The question then is whether you can finish - and right now we are doing that very well.

It is not just England who are exploiting set-pieces, because this tournament has seen a lower percentage of goals from open play than any World Cup in the past 20 years.

But it is great to see us leading the way. It is not often anyone could say that about any aspect of England's play in recent years.

'Why would you want to disrupt the rhythm of this team?'

There are plenty of other reasons to be positive about the Three Lions at the moment. I just get the feeling something quite special might be starting to happen.

We often get criticised on the BBC for going over the top about England, but I think everyone is enjoying it - including the players.

Before the first game I said I wanted to see them embrace this tournament and it does look like they are having great fun.

Everyone is full of life and full of spark and you can see the buzz they are getting. I am sure nobody wants to be rested against Belgium, so the manager has a decision to make.

In his position, I would make maybe one or two changes and bring in, say, Danny Rose at left wing-back and Marcus Rashford into attacking midfield.

But why would you want to disrupt the rhythm of this team? We are on a roll and if that stops suddenly because Gareth makes lots of changes it might be difficult to get that momentum back.

'Forget about who might come next - let's win the group' 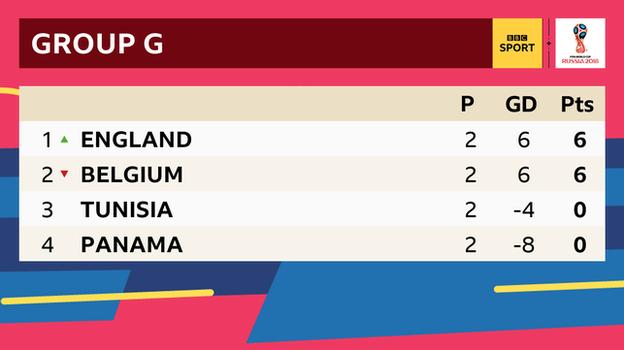 As well as tiredness, the other thing not worth worrying about is whether we might get further in the tournament by finishing second in Group G instead of first.

Colombia looked very impressive against Poland on Sunday but, in terms of who comes next, I don't think it matters whether it is the South Americans, Japan or Senegal.

If you start trying to plot our route any further into this World Cup, then we should consider what other teams are thinking about us at the moment.

Based on our form, I cannot think many sides will want to play us so, rather than looking at who we might want to play, or avoid, let's just concentrate on winning the group.