If ever a picture summed up the pressure of a nation on a player's shoulders, this was it.

Argentina's Lionel Messi carries the hopes of 44 million people and it showed as he lined up before kick-off in their crucial World Cup match against Croatia on Thursday, with the captain rubbing his forehead with his eyes closed.

The Barcelona forward has watched on as rival Cristiano Ronaldo has scored four goals in two matches for Portugal, including a hat-trick against Spain.

But the 3-0 defeat by Croatia means Argentina's fate in Group D is now out of their hands; they need results to go their way to stay in the competition.

So, why has Messi been so poor? Is he trying too hard? Is it his fault?

There were reports during the week that Messi has been feeling so down after last Saturday's 1-1 draw with Iceland that he refused to attend a barbecue organised by Argentine staff, instead staying alone in his hotel room.

If Messi's pre-match actions on Thursday suggested a headache, it will have got worse by seeing Chelsea goalkeeper Willy Caballero's howler, which led to Ante Rebic's first goal in Nizhny Novgorod and contributed to Argentina's heaviest World Cup group-stage defeat since 1958.

Former Barcelona team-mate Cesc Fabregas, providing analysis on BBC One, called Argentina a "broken team" and questioned their team spirit, saying they were "playing against each other, not for each other".

He said: "It is difficult for Messi. He does not have the quality in behind him and is really missing Ever Banega or Giovani lo Celso.

"He needs someone who can help him build up the play. You want your best player to be on the ball the most as you can."

Former Manchester City full-back Pablo Zabaleta - who played in the 2014 World Cup final for Argentina - said the side's failure to "play quicker" has left Messi "isolated" in the final third.

Reflecting on the defeat, Zabaleta said: "I cannot remember a performance like that. The team looks so poor. They were predictable and did not create anything."

Former England captain Alan Shearer added: "Argentina had no plan and were a complete shambles."

Messi left the pitch straight after the final whistle, one of the first to head down the tunnel.

It was clearly an extremely painful evening for a man who has already suffered so much in a blue and white shirt.

All the way through the match, there were tell-tale signs. The clenched fist as a Sergio Aguero cut-back just did not carry, a little jump on the spot in frustration at an over-hit pass.

For long periods of the game Messi wandered, but not in the same way as he tends to with Barcelona, where you feel he is never more than a pass away from being brought back into the heart of things.

Tonight he would trot, gather pace in anticipation, then stop and let his arms flop as possession was lost or another move broke down.

There was more fight and guts in the second half - there had to be after Caballero's dreadful mistake left Argentina battling - but again it was just not meant to be.

You watch Messi thinking that all it would take is one moment, one opening, for his genius to emerge. It didn't arrive tonight. 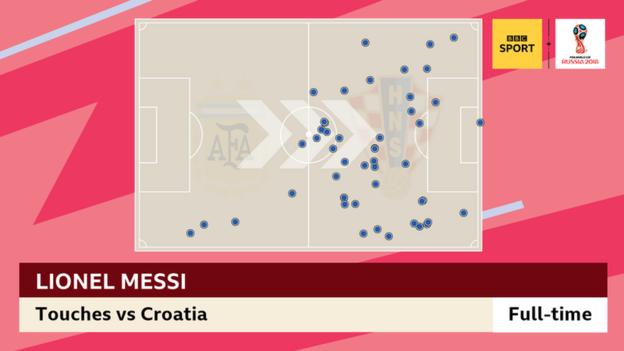 Argentina coach Jorge Sampaoli had already been questioned for his squad selection for the World Cup, opting to leave Mauro Icardi, last season's joint-top goalscorer in Serie A, off the 23-man roster, despite his 29 goals for Inter Milan.

And Juventus' Paulo Dybala, who scored 22 league goals last term, has also been sidelined, starting both games on the bench.

Former England winger Chris Waddle said on BBC Radio 5 live: "It is all built on Messi and everything around him but not everybody will be on his wavelength.

"Paulo Dybala can link-up with Messi, but he is on the bench. You need to get back into the game and Sampaoli takes Sergio Aguero off.

"Messi is trying to do too much and he ends up so frustrated that the game just passed him by. He must think: 'What am I doing here?'"

Where does Messi go from here?

Messi has scored 64 goals in 126 appearances for Argentina and despite lifting every trophy available with his club Barcelona, he has never won silverware on the international stage.

He lost the 2014 World Cup final against Germany, as well as two Copa America finals, deciding to retire from international football in June 2016 but reversing his decision two months later.

Zabaleta feels Messi may decide to call it a day once more.

"I just feel so sorry for Lionel Messi," he said. "This was his last chance to win something with Argentina - so I wouldn't be surprised to see him retire from international football after this.

"He will be so disappointed and it is another four years until Qatar."

Former Argentina striker Hernan Crespo told BBC Sport that Messi does not need to win the World Cup to be considered an all-time great.

"A lot of players are great in our memories without winning the World Cup," he said. "If he wins he is a great player, but he is still a great player if he doesn't.

"How many great players didn't win it? I don't remember Johan Cruyff or [Michel] Platini doing it."

Zabaleta added: "The people in Argentina will be so angry now. You expect more from those players. They were so hungry for this World Cup, and they will not accept this."

Ben Clarkson: Argentina have absolutely no fight, Messi just looks deflated. Portugal play for Ronaldo because they recognise he's a mile in front of everyone else and he's the one who wins the games. Argentina need to wake up and do the same for Messi.

Josh Hill: Still think Messi is the GOAT [greatest of all time]? Non-existent this match. No GOAT could sit upfront and watch his team fall apart. Argentina had no control like Barcelona usually do. Without this control he's used to, Messi is nowhere near the standard you expect.

Andrew Bougourd: Messi gets all the excuses. He was as woeful as the rest and as a captain to walk off without acknowledging his travelling fans is embarrassing!

Iman Pirmohamed: People overreacting with Messi. He's got them to a World Cup final, and numerous Copa America finals. If he had players around him that could finish, he'd be a international tournament winner. Not his fault that he can't do everything for the team! 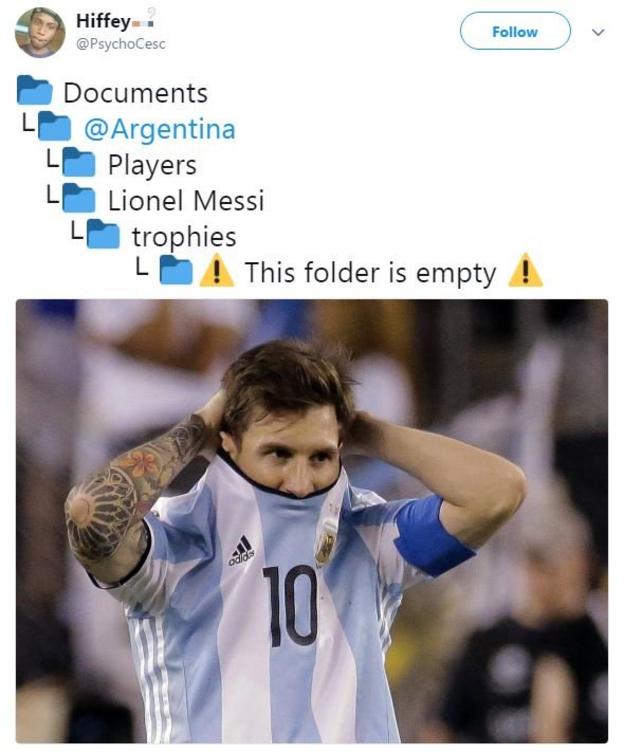