"He is like a Port wine. He knows how to refine his capacity and age at his best."

That was the verdict of Portugal boss Fernando Santos after captain Cristiano Ronaldo's winning header against Morocco on Wednesday.

Now 33, the Real Madrid forward has scored four goals in two games so far at the World Cup in Russia - and his hat-trick in Portugal's 3-3 opening draw with Spain included a brilliant last-minute free-kick.

He started his career as a tricky winger with bags of pace, first for Sporting Lisbon and then for Manchester United - but he has since changed his game to a goal-poaching centre-forward for club and country.

"He is constantly evolving, contradictorily to the other players," said Santos. "He knows himself and he knows what he can do.

"What he does now is not what he did three or four years ago, and not what he will be doing in a few years from now."

Ronaldo added: "I am very happy. I managed to score a goal, it was great for me. Our expectation is to continue our work and try to improve in the group phase."

Portugal face Iran - who were beaten 1-0 by Spain on Wednesday having opened with a 1-0 victory over Morocco - in their final Group B game on Monday in Saransk (kick-off 19:00 BST). You can watch that match live on BBC TV and online. 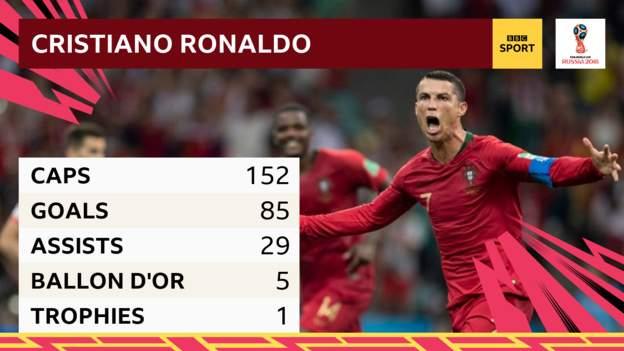 Ballon d'Or holder Ronaldo has scored 450 goals in 438 for Spanish giants Real Madrid and won three successive Champions Leagues with the side.

His fourth-minute winner against Morocco took him to 85 international goals, which is more than any other European player and just 24 short of Iranian striker Ali Daei's global record.

"Let's talk about Ronaldo," said former England midfielder Jermaine Jenas on BBC One. "He is an animal in the box. He is strong and physical.

"His movement is sensational. When you've this guy you've always got an opportunity. The bravery he shows and his movement is so clever, he is a nightmare for centre-halves to deal with.

"For the goal, he is putting his head where people are putting their studs."

Ronaldo is the first player to score five consecutive World Cup goals for his team since Oleg Salenko for Russia in 1994.

He also became the first Portuguese player since Jose Torres in 1966 to score a goal with his right foot, left foot and head at one World Cup.

And the treble against Spain meant he became the first player to score in eight consecutive major international tournaments.

"He is the best striker at the moment in the world," said former Chelsea striker Didier Drogba said on BBC One.

"He is complete. He can score headers, left foot, right foot or free-kicks. He is always on the move and that is very difficult to defend against."

Former England defender Martin Keown described Ronaldo as being "like a Ferrari" changing through the gears and Rio Ferdinand, another ex-England centre-back, said it feels "terrible" to compete against a player of the calibre of his former Manchester United team-mate.

Former England striker Gary Lineker said Ronaldo had turned into a "proper poacher", while Chelsea midfielder Cesc Fabregas lauded his ability to do it "game after game after game".

Ronaldo still excites like few other players do, and several of the fans I spoke to outside the stadium with his name and number on the back of their shirt had come from all corners of the planet simply to see him in action.

Ronaldo duly delivered - in the way we have come to expect. Not just a goal, but the goal - in this case, not spectacular, but definitely decisive.

In most other ways, however, this was not a vintage Ronaldo display.

Yes, he set up Portugal's only other shot on target and the intelligence of his movement was plain to see, but he missed badly when he had a chance to seal the win in the second half and, to the disappointment of the thousands inside the stadium who used their smartphones to film both his free-kicks from the edge of the area, he blasted both into the wall.

That part of his performance does not matter though, certainly to the man himself, and also to those who came to Moscow watch him.

They have seen a bit of his magic at this World Cup - but for Ronaldo's limited team to progress deep into this tournament, there surely needs to be more.

Robert A.E Simon: I think Cristiano Ronaldo came into the World Cup with the pain of not scoring in the Champions League final. Now he's taking it out at every team he faces. Come on Ronaldo, it's not their fault.

Andy: Ronaldo gets better and better every season. He's the ultimate player.

Steve Kennedy: Ronaldo has pretty much now destroyed the argument about who is better between Lionel Messi and himself. He is just extraordinary. Messi is world-class but Ronaldo literally carries average teams/other players to greatness.

Jamie Bolton: If you're saying Ronaldo has "smashed the argument about who's better" you've clearly only been watching football for the last couple of years. We have been blessed by getting to watch the two finest footballers ever! Argument simply comes down to your preference!